I am a person who makes a big deal out of things that are not a big deal. This has been obvious to me in my recent squeeing. (Okay, I’ll admit, it’s not just recent. I’ve always been this way.) What is it that I am frequently squeeing about?

In my recent prose reading, I have made exclamations about people of color showing up as primary love interests in my most recent favorites, like Geekerella and Alex, Approximately, both of which would have been pretty high on this year’s list with or without said representation.

In comics, I’m often drawn to stories featuring characters of color. My recent favorites in both the capes-and-tights and non-superhero stories are relatively full of them. And somehow, I’ve also managed to stumble upon some great queer characters while I was at it.

This is where the abovementioned “making a big deal” comes in. In one of the first things I wrote for Book Riot, I talked about interracial relationships in queer YA and the fact that these relationships weren’t made a big deal out of. And that was a big deal to me. When you’re reading books featuring relationships and potential relationships that some portion of the population might feel the need to comment upon, especially when they in some way also reflect your own relationship, the fact that friends and family—or even antagonists—aren’t making any commentary…is noteworthy.

And comics are doing this relatively well right now. 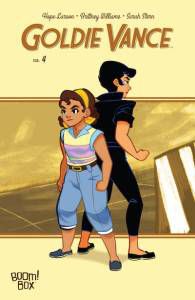 The first time I made note of such casual queerness in a leading character was last year as I read the first volume of Goldie Vance. Awesome in its own right, Goldie Vance tells the story of a teenage girl in mid-century Florida who takes it upon herself to solve the mysteries happening at the resort hotel where she and many of her family members work. Goldie’s relationship with her friends and the people she meets on the way as she’s trying to figure out weirdness makes the story. And nothing made it quite like her reaction to Diane every time they meet.  I think I might have put the trade down and exclaimed aloud when I realized what was happening. How exciting was this?! A teenage girl, a brown teenage girl, in the 1960s, might have a girlfriend in the future. And nobody is making a big deal out of it; not her friends, not her parents (though they don’t appear to know), not people we see around.

This was a Big Deal to me. 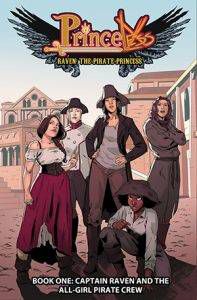 After I read that, I found myself trying to catch up on Princeless, in which I had fallen horribly far behind. Princeless itself had already been one of my favorite things, as Adrienne is one of my favorite people. But then I met Raven, and my life turned upside down again. Raven is a general badass woman, and she, too, just drops in with an “oh, by the way” queer element.

While I love to read stories about people who don’t appear to be anything like me at all, I still gravitate towards stories in which people like me are represented. These don’t have to be black women, obvi. If some element of my experience might come through in a story, something I can even just casually relate to, it’s amazing, and makes the rest of the story even more amazing than it might have been otherwise. And when whatever element of that story that I recognize as part of my own life is just there casually, I have to make a note of what the storyteller is saying:

This is real. This is normal.

There is nothing wrong about this.

And that is the best story to tell of all.