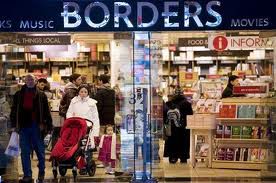 My family moved to Santa Barbara, CA (about an hour and a half north of Los Angeles) when I was in the fifth grade. When we moved, there was a bookstore called Earthling Bookshop. Earthling became one of our favorite places to go on weekends. It was a huge bookstore. At least I remember it being huge, I was ten and tiny, so it might have just been huge to me. Murals were painted on the walls of great novelists and writers who would look down on patrons while they book-browsed.

Borders and Barnes and Noble moved downtown just blocks away and drove Earthling out of business when I was in middle school. Earthling became a Copelands Sporting Goods Store. Eventually Copelands went out of business and became what it is today, an Old Navy. I still hate passing by that Old Navy. Usually I just don’t look. I know the Earthling isn’t there anymore. I know it, but it’s hard to actually look and see the physical proof that the store no longer exists.

When I was in high school the Borders downtown was a meeting place. If you were going Christmas shopping with friends, you’d meet at Borders. It was right next to a movie theater, and so it was common practice to book-browse before or after a movie (or both). There was a Barnes and Noble a block down. When Borders went out of business, Marshalls took over. It’s just not the same browsing for discount sweaters before a movie. It’s just not.

The Barnes and Nobles held on a little longer, but it eventually became an H&M. Which was REALLY exciting for all the teenage girls of Santa Barbara and REALLY sad for the rest of us.

I put out a call on Twitter asking if anyone else had a story about a beloved bookstore going out of business and the storefront becoming a…less beloved business. The response was a little bit overwhelming. Below, a selection:

@clintonk : the book warehouse in our neighborhood went out, and we got *another* dollar store

@ca_london: years ago in Timonium, MD Bibelot Books closed most of the space became a Baja Fresh Tacos.

@JanetNorCal: The Borders in San Rafael, CA became a T.J. Maxx and on principle, I’ll never go there.

@DeadWhiteGuys: When our Borders closed, it was replaced with one of those sketchy seasonal Halloween costume stores.

@bravenewlady: My Davis-Kidd Booksellers in Nashville, TN, lasted for 30 years, and is now a Container Store.

What about you guys? Did you lose a beloved bookstore? Was the store turned into something… less beloved?