Do you remember that time when some of the best books literally went to war? I don’t, either. That’s because the Library War Service was established in 1917 by the American Library Association, and it’s safe to say that was way before our time. The Library War Service was established to provide books and other services to soldiers who were serving in Europe during World War One. Librarians across the country campaigned heavily to have books donated to public libraries so they could be sent overseas.

Books in the Trenches 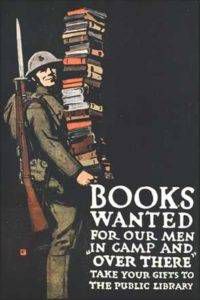 There was constant horror in the trenches, so one of the only ways soldiers could find any solace was in a good book. It is no secret that reading is beneficial in a variety of ways, but the biggest benefit books offered during the war was the way in which they boosted morale. Soldiers appreciated the books they received because it provided them a sense of comfort and relief from all the pestilence that surrounded them.  Many soldiers lived in cramped and uncomfortable conditions while in the trenches. Remaining static for long periods of time left men with a desire to read to take their minds off the death, the rats, the mud, and the seemingly never-ending stalemate. How would they find the will to read, you ask? I haven’t the slightest clue, but research shows that some of the greatest books and poetry were penned deep in the trenches. Quite an amazing feat considering the circumstances.

During the Second W 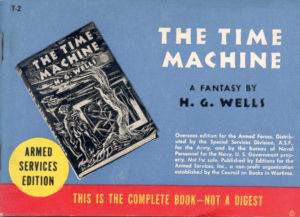 orld War, public librarians from all across the United States upped the efforts of their predecessors during World War One by sending over one hundred million books to soldiers overseas. These were known as Armed Services Editions, or ASEs, and were printed by the Council on Books in Wartime. ASE titles featured fiction titles, nonfiction, classics, biographies, poetry, and many others. The books were small and only came in paperback format so soldiers could easily tuck them away somewhere and hopefully finish a book at a later time. Books were shared amongst soldiers, and they were so popular that many men began requesting specific titles and genres. Accommodations were made but supplies were indeed limited.

Some books that were sent overseas include: The Grapes of Wrath, The Great Gatsby, The Adventures of Superman, The Postman Always Rings Twice, A Tree Grows in Brooklyn, Frankenstein, The Time Machine and many others. Molly Guptill Manning’s book When Books Went to War: The Stories that Helped Us Win World War II goes into great detail about many of these books and she even makes the argument that the morale boosted by these books helped us win the war, as the title suggests. It’s a pretty good read, which I recommend.

It should also be noted that librarians who assisted with sending ASEs overseas metaphorically went to war as well. As you may or may not know, Nazi Germany had banned and burned over one hundred million books that they deemed unsatisfactory for their citizens (subjugated by Minister of Propaganda Goebbels), so librarians declared war by organizing the campaign that initiated the entire book-sending program. Talk about some pretty bad-ass librarians.

This history of books is unique and one-of-a-kind. What other cool things about books have you learned?