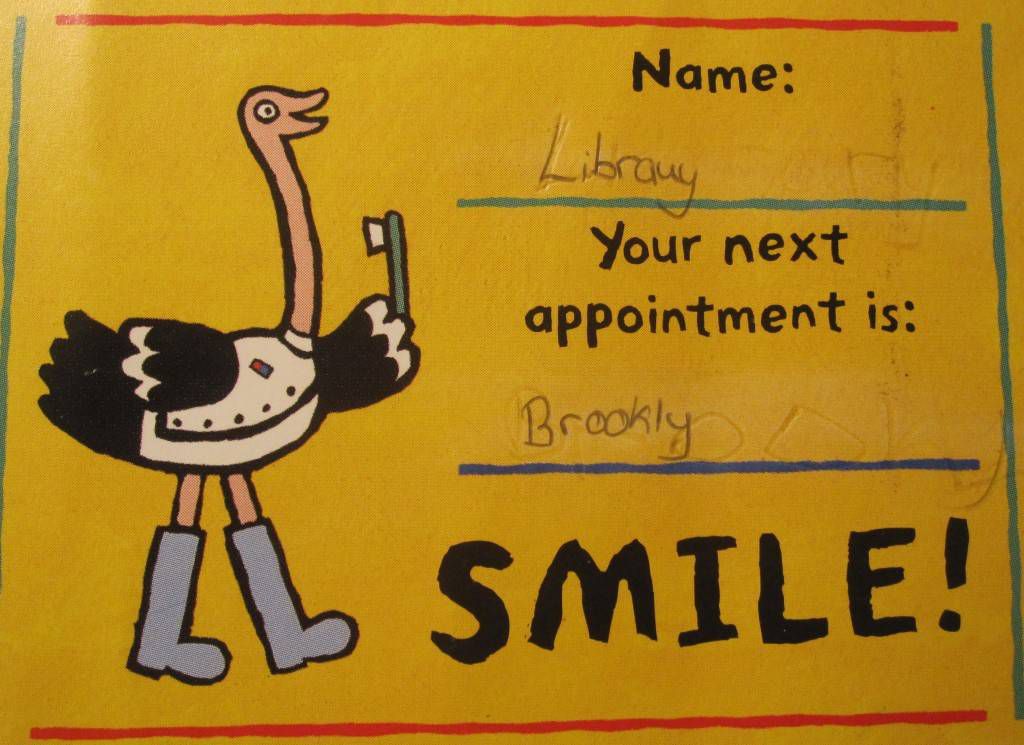 No matter which side you’re on in the vicious battles between ebooks vs. print or self-publishing vs. traditional, I believe that ALL literary-minded folk can come together and agree on one thing: if you’ve vandalized a book that doesn’t belong to you, you’ve committed a grievous sin.

I call this phenomenon Book Graffiti. I also call it EVIL.

Okay, perhaps that’s a bit harsh. After all, sometimes the notes found in book margins can be insightful (especially if they were found in copies of the classics we had to read in high school – THANK YOU to whomever read The Iliad before I did). And, if I’m being completely honest, book defacement can sometimes can have hilarious results, as illustrated in this post from Student Beans: “22 Ingeniously Defaced Textbooks & Exam Papers“.

And yet, there can be a dark side. As a librarian, I realize that I skew a bit to the side of DON’T WRITE IN ANY BOOK EVER because once a library book has been vandalized, it most likely needs to be discarded and re-ordered, and this is tough on already strained library budgets.

In addition to the act of vandalism being problematic, the content of book graffiti itself can raise questions, as well as eyebrows. Much like those troll-ish internet comments we all love so much, book graffiti is mostly anonymous, allowing people to write things weird, profane, and sometimes downright disturbing with no consequences. (And let’s not even get into the occasions where people deface library books beacuse they want to censor them – crossing out bad words, ripping out pages containing sexual content, etc.)

Posted below are some examples of book graffiti I’ve found in library books over the past couple of years. Perhaps these vandals, whoever they are, were trying to work out some deep-seated issues on the pages of these books. Perhaps they simply wanted to shock or horrify the next reader. We’ll never really know their motives. But it’s my hope that by sharing these with you today, you’ll think twice about ever writing in a library book again. 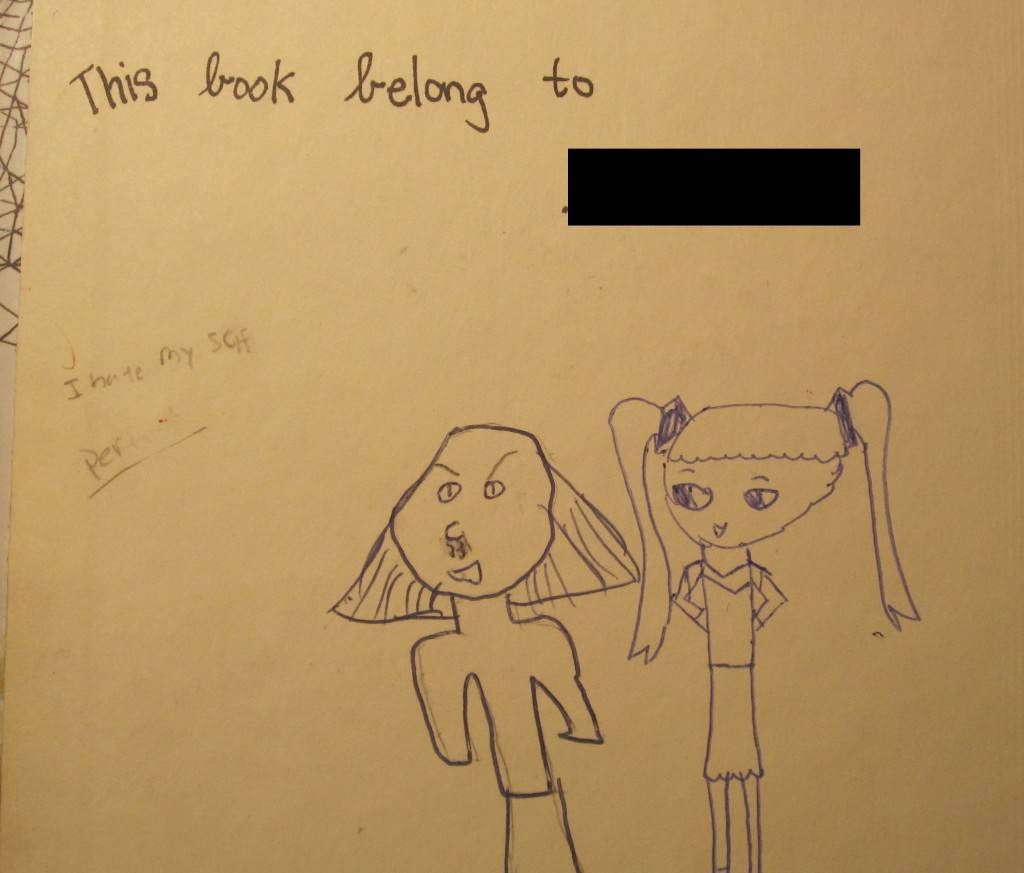 There’s a lot going on here, but this one wouldn’t be SO awful if not for the sad, surreptitious self-hating note on the left-hand side. Don’t hate yourself, Little Vandal. Just stop writing in books. 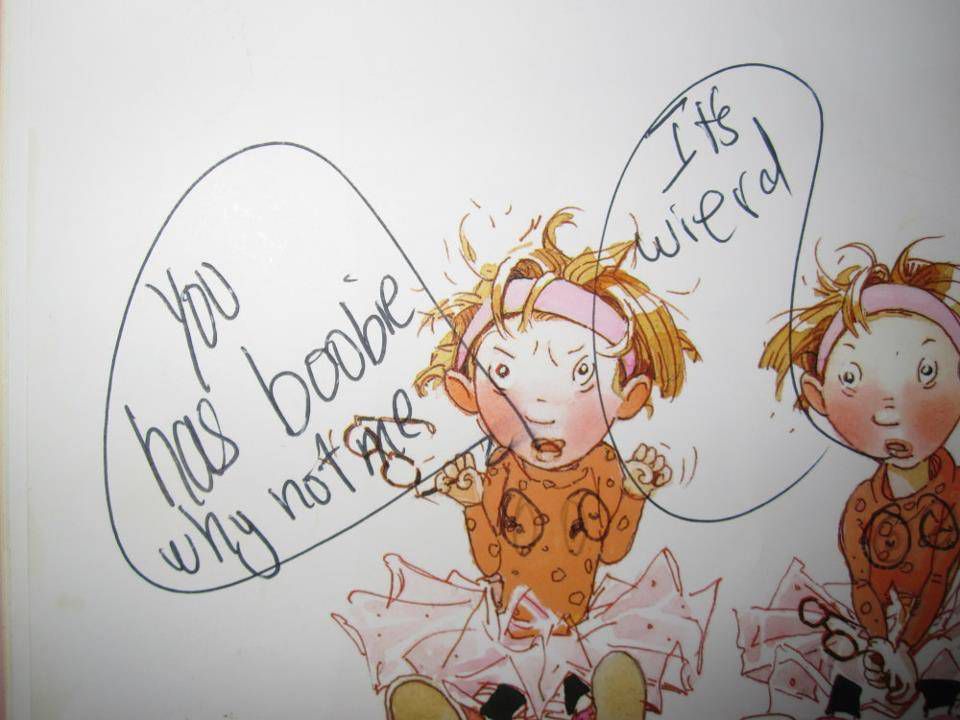 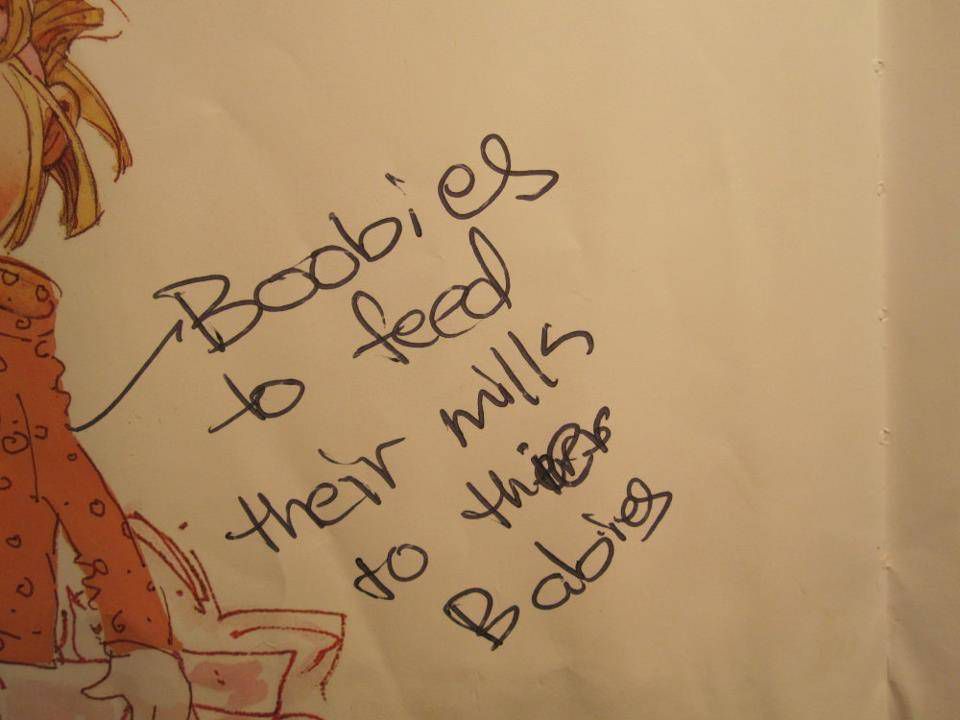 These two were actually part of a longer “series” of mammary-related scribbles in the book (in the interest of both space and propriety, I did not post them all). I’m no psychologist or anything, so I’m not going to try to unpack the deeper meaning behind these. I WILL concede that some boob-envy is normal at a certain stage in life, but why take it out on a children’s book?

The pure vehemence of this one is what makes it so disturbing to me. Do you even KNOW the author, Little Book Vandal? Did you date him and he broke your heart or somethin’? It’s going to be okay. There are more authors in the sea. (And just a tip, if you ARE going to deface a library book, it’s probably not a good idea to put your name at the bottom.) 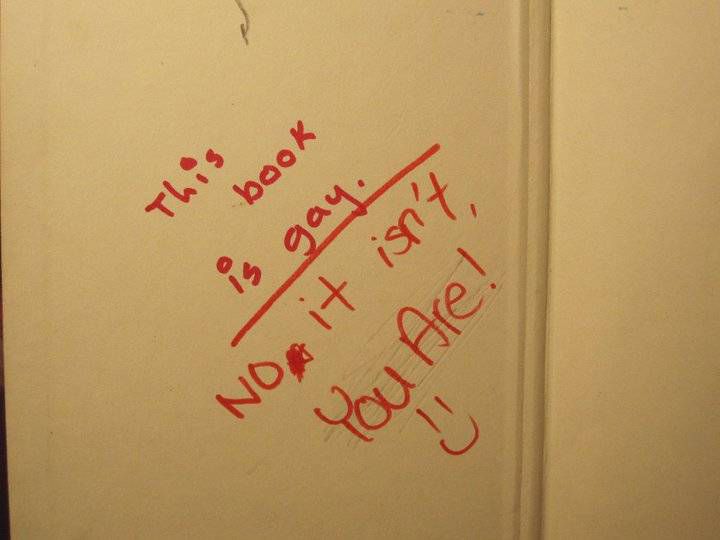 This one makes me legitimately sad. Are we as a society EVER going to stop using “gay” as an insult? Let’s grow up and get smarter, people. The sarcastic smiley face at the end is also a nice touch. (And by nice, I mean annoying.) 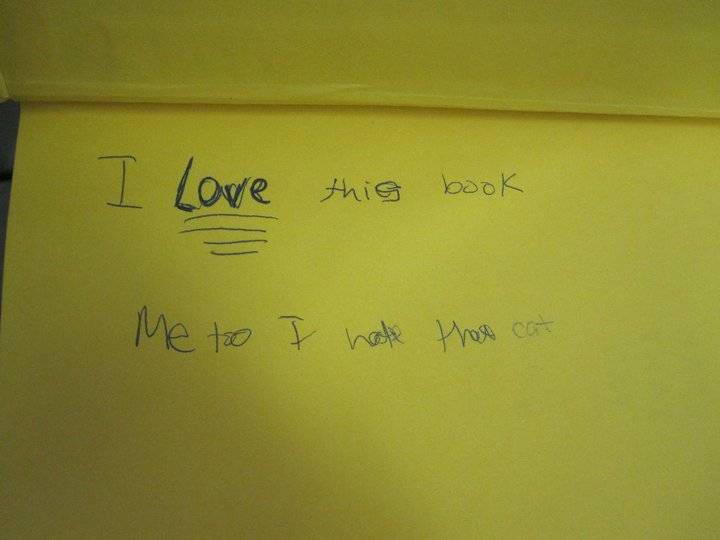 These two examples were found in the same book. The first comment is kind of cute. Yay! S/he loved this book! The next comment, however, takes a sharp turn into Creepsville. (I’m just glad s/he didn’t finish that second sentence.) 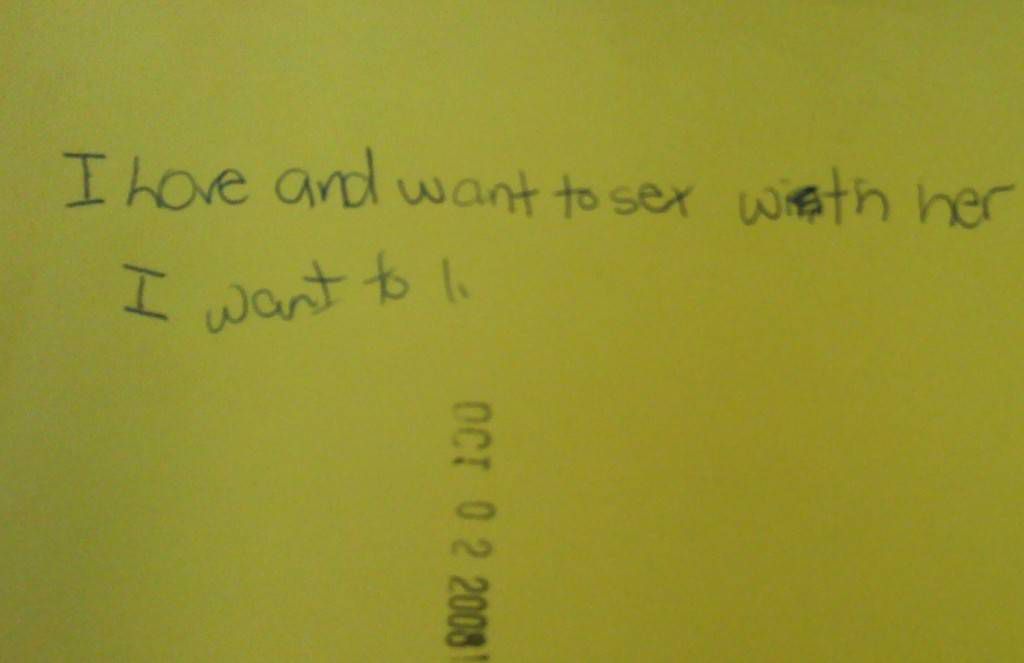 7. So as not to leave things on a negative note, I am providing the next three photos in order to show you that book graffiti is not ALWAYS without hope. (I’ve linked the two that were originally posted on my library blog.) First, a lovely pastoral: 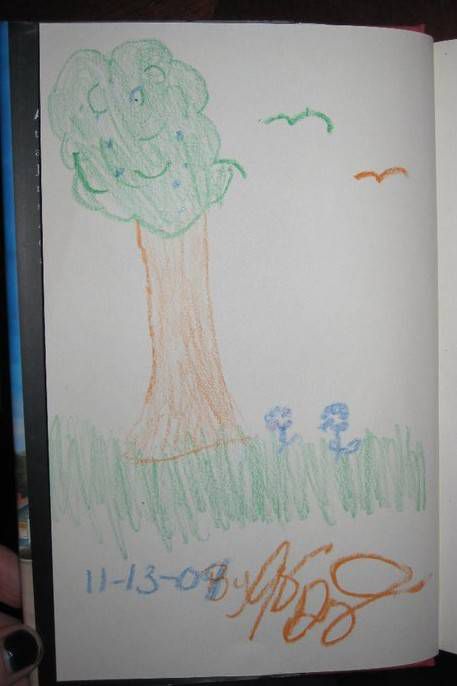 A future Bob Ross in the making? 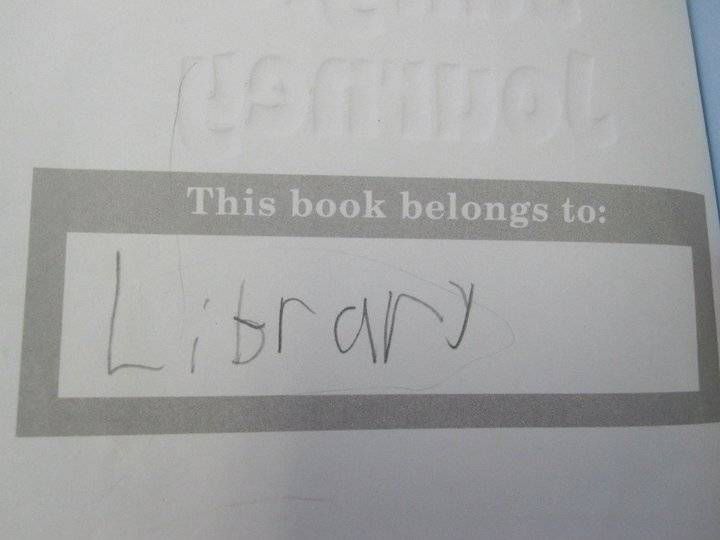 These last two are encouraging in the sense that even though these books were technically defaced, the kids who did the defacing KNEW the books’ rightful owner: the library.

Be good to your library books, people.