At a party this past weekend, I watched a dude pick up a lying-around copy of Colum McCann’s Let The Great World Spin and begin perusing the back cover. Naturally, I sidled up and asked if he’d read it. (I read it a few years ago, and loved it!) He said he actually hadn’t heard of it before, but “there sure are some big names here in the blurbs.” (The novel’s blurbs include praise from Frank McCourt, Richard Price and Dave Eggers.) He scanned the bar code with his phone and said he was definitely going to pick it up. “Fascinating,” I thought. “Blurbs DO matter.”

Well, a qualification with which I think most readers would agree: The name of the blurber matters much more than what the blurb actually says. That’s probably common sense. Even though many blurbs are contractually pried from writers, many, many others are given extremely selectively only to novels the writer actually enjoyed. That said, if the content of a blurb misrepresents the novel, it can have a hugely negative effect on the reading experience.

Exhibit A for this for me is the blurbs on Carlos Ruiz Zafon’s The Shadow of the Wind. The back cover includes a blurb from Richard Eder of The New York Times Book Review exclaiming that Zafon’s novel is “Gabriel Garcia Marquez meets Umberto Eco meets Jorge Luis Borges for a sprawling magic show…exasperatingly tricky.” Now, anyone who has read anything by those three novelists knows that, each in his own way, can be complex (to the point of convoluted and inaccessible in some cases), erudite, and purposely puzzling. Zafon’s novel, while solid, doesn’t come close to those and is CERTAINLY not “exasperatingly tricky” — it’s just a good mystery with the idea of the love of books at its heart. Again, though, it’s nowhere near the cerebral level of any of those three novelists, much less an amalgamation of ALL three of them. And what’s more, Stephen King — the master of the straight-as-an-arrow-linear novel — is blurbed on the FRONT cover. He says, “One gorgeous read.” And while that’s pretty close to true, King’s mere presence is a marked juxtaposition with what the blurb on the back tries to convey. So I was totally confused heading into the novel, and for that reason my expectations were simultaneously high and low and just tied in knots, and I came out on the other side just scratching my head a bit. 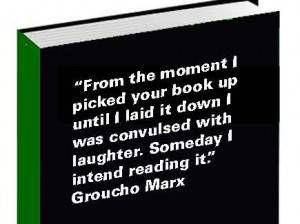 However, more often, I think, a blurb — again, more importantly, WHO blurbed — can be a positive, and can often result in an impulse book-buy. I’ve often picked up novels I’ve never heard of based mostly on blurbs by novelists whose books I enjoy. A case in point is Rebecca Goldstein’s 36 Arguments for the Existence of God, which includes blurbs by, among others, Jonathan Safran Foer and Jess Walter. Delightful!

What has been your experience with blurbs? Do you put stock in ’em? Why or why not?

(Check back on Thursday for Part II — a list, with snarky commentary, of some of the more egregiously bad, ferociously funny, or outlandishly over-the-top blurbs I’ve ever seen.)