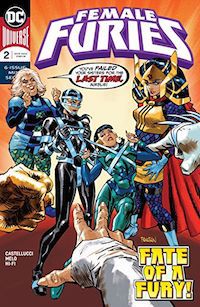 I don’t know if you spend as much time on Comics Twitter as I do. But if you do, a) don’t, and b) you’ve probably seen the latest outpouring of vitriol, threats, and dog-piling in response to a critic daring to point out that perhaps a comic might have room for improvement. If not, here’s the brief:

[Note: some offensive language is quoted below.]

When DC’s Female Furies #2 by Cecil Castellucci and Adriana Melo was released on March 6th, Claire Napier, a comics critic and editor, tweeted that she didn’t think its cover, drawn by Dan Panosian, served the book well:

Why be this foolish? I just don't know, I don't get it. The comic is good; this is mining below it pic.twitter.com/98NAC6FbiB

Panosian either searched his name or was alerted by a friend to this tweet, and replied to explain his intentions:

It's all a matter of perspective and how you wish to view the world I suppose. pic.twitter.com/uPpH0DsUiq

When Napier held to her original interpretation, Panosian then tweeted at her eight more times to insist on his version, ending by telling her to “spend more time learning to draw and less time criticizing others.” (Napier is, again, a professional critic.)

Panosian then posted a six-tweet thread about his opinions on how critics and artists should behave:

His buddy Frank Tieri was unhappy that his friend’s work had been criticized, and from there the tone of the discussion…escalated. These tweets have since been deleted, but screenshots are forever: 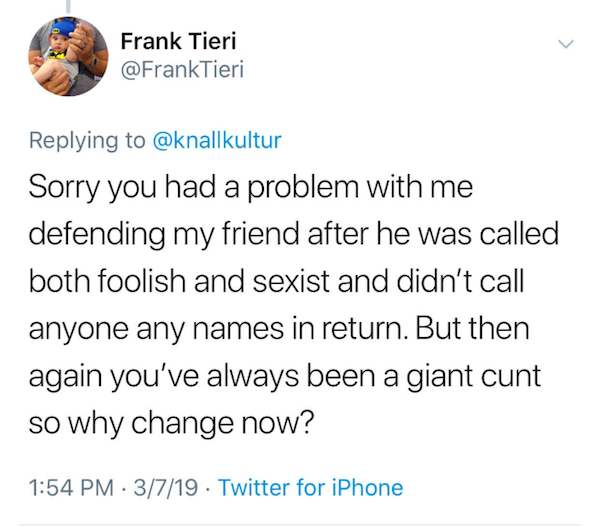 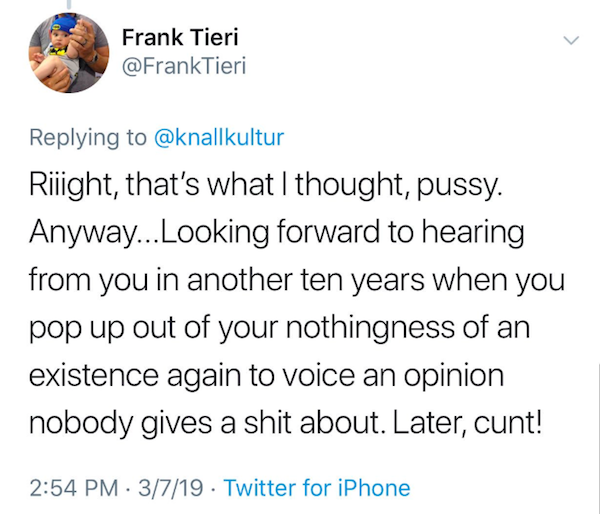 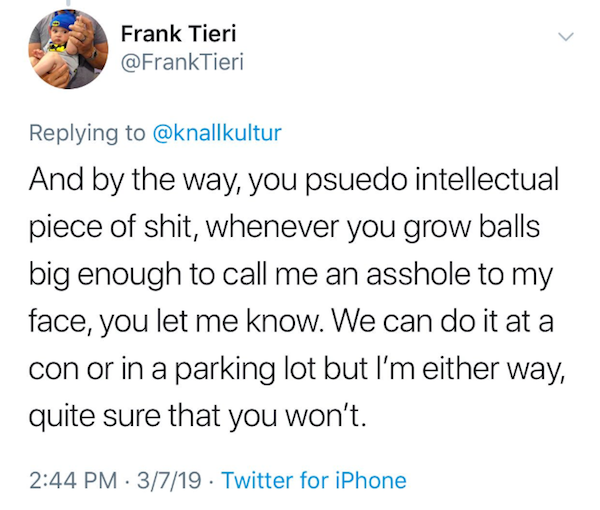 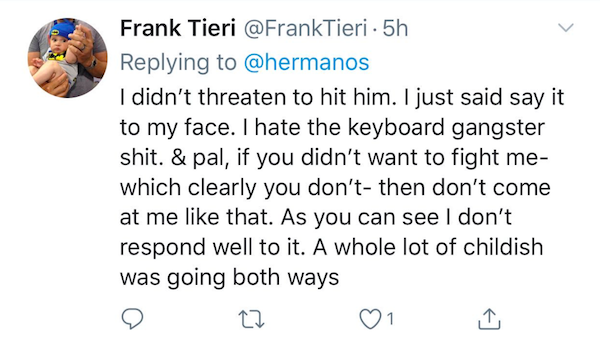 A number of people pointed out that “meet me in the parking lot” implies “so that I can beat you up for what you said,” i.e. a threat of physical violence. Threats, of course, are serious business, and so immediately the comic book industry unleashed a wave of support…for Tieri.

Yep. Not the critic who had pros passive-aggressively directing hate her way for being “rude” and “impolite.” Not the people actively getting threatening language slung their way. Not even the guy whose work was initially critiqued.

Nope, the dude shrieking “c*nt” and “p*ssy” at random people for saying “It’s not okay to vanity search and then throw tantrums in other people’s mentions about what you find”! He’s the one who deserves a supportive hashtag! Let’s set up a GoFundMe! #IStandwithFrank!

Another comics critic and historian, Thal, rounded up a thread of comics pros applauding Frank’s bravery in…threatening…critics. Thal also contextualized the situation in terms of their own experience with receiving threats for their work, and I highly recommend reading the whole thing. It starts here:

I was once warned that I should hope to never meet a prominent comics man on the street, after I reviewed his comic.

We ALL know what these vague threats mean.

Please note that all of these supporters are men. You might also catch what other sharp eyes did: that Marvel’s Editor-in-Chief, C.B. Cebulski (you know, the guy who pretended to be Japanese?), liked quite a lot of those tweets.

It should go without saying- don't threaten people. If you're engaging people on social media – do so like you're meeting them face to face and show some decency and respect. It goes a long way.

Your opinion matters – just be polite to others if you intend on sharing yours.

…although his insistence that everyone Be Polite (you know, as Napier allegedly was not to him, when he pushed into her mentions and wouldn’t leave) kind of undercuts any backpedaling. As does his immediately threading that tweet with one saying “Oh, Frank’s just old school!” Boys will be boys! And threaten people!

Tieri, in turn, deleted his most aggressive tweets and posted a statement:

In regards to recent events… pic.twitter.com/yFubyP77C9

“That wasn’t me,” Tieri insists. “That’s just how he is,” Panosian insists. Meanwhile, they both continue to retweet statements of support for their brave, brave behavior. Neither has apologized to Napier or the critic Tieri attacked in the screenshots above.

Ironically, Female Furies? Is a series about women dealing with workplace harassment.

But what really struck me about the whole situation was how perfectly it illuminated two of the major issues plaguing the current comic book industry:

1. Critics are not the enemy, and comic book professionals have to start internalizing that.

Directors do not throw fits in the comments section of Rotten Tomatoes. Artists do not hunt down the New York Times reviewer because their latest gallery showing was panned. Even small restaurants can handle a salty Yelp review.

But too many comic book professionals seem to believe that if you don’t write or draw comics, you have no place critiquing them…and if you do write or draw them, you’re not allowed to critique them, because it’s “not fair” and “rude.” They lament the lack of review coverage for their books, which means fewer preorders and early cancellations, but they seek out the writers of reviews that are in any way negative and attempt to argue them into submission, or dismiss any criticism as “hate.” Small wonder that critics, with a punishingly fast publication schedule, an ever-shrinking pool of places to publish that actually pay, and much more limited access to review copies than other creative industries, keep dropping out of the game.

What comics pros don’t understand is that comics criticism is not for them. It is for readers. If you’re a pro who sees a criticism you don’t agree with, I don’t think it’s the worst thing in the world to say, “Hey, actually, this is what I was going for…” But if that’s not what the reader sees, that’s not what the reader sees, and you can’t make them see it. Take some time and consider whether the critique is valid. If you decide it is, take it on board. If you decide it’s not? Live your life, man! It’s not your problem!

2. The old boys’ club is real, and it’s stifling comics.

It astonishes me—but probably shouldn’t—how many men proudly tweeted something along the lines of “I don’t know what Frank did or what’s going on, but he’s my friend and he’s probably right.” Loyalty is great, but sometimes your friends are gonna be in the wrong. I appreciate the times when my friends have collected me from a situation I was too close to more than I can say. I mean, honestly, if you can’t take five minutes to assess the situation and maybe talk some sense into your pal, how good of a friend are you?

On a more macro level, “I don’t know what’s happening on Twitter dot com, but I believe my buddy” is a really familiar story to many, many people who don’t have that institutionalized power.

It sounds a lot like “I don’t know who applied for this job, but we should call my buddy.”

It sounds like “Yeah, she said he harassed her, but I believe my buddy.”

Marginalized readers and fans recognize this song because we’ve heard it often enough to learn it by heart. It’s the reason the creative teams at DC and Marvel are still over 80% male. (I don’t know of a source with similar numbers on racial diversity in mainstream comics, but I’d imagine it’s even more dire. Likewise for representation of diverse sexualities, religions, ability levels, etc., and triply so for intersectional representation.) It’s the reason the industry is still rotten from the inside out with sexual harassment.

I am not for one minute suggesting that Panosian or Tieri have engaged in sexual improprieties or sketchy hiring practices. I’m saying that the knee-jerk instinct to support them while loudly boasting of your ignorance is a bad instinct. The instinct to close ranks may spring out of friendship—a laudable source!—but when it’s not examined, it leads to…Well, looking like an oblivious bully on social media is the good option. All too often, you’re signing off on things you tell yourself you wouldn’t, because you refused to look closely.

Will anyone learn anything from this latest round of Twitter furor? Will anything actually change? The cynic in me says no; the woman that was reading comics 15 years ago, when things were, believe it or not, even worse, says change happens so slowly you can’t see it until it’s done.

But if we want to get there, comics professional have to start being more, well, professional about how they respond to criticism they don’t like, and who they thoughtlessly support.

Or at the very least, delete their Twitter accounts.