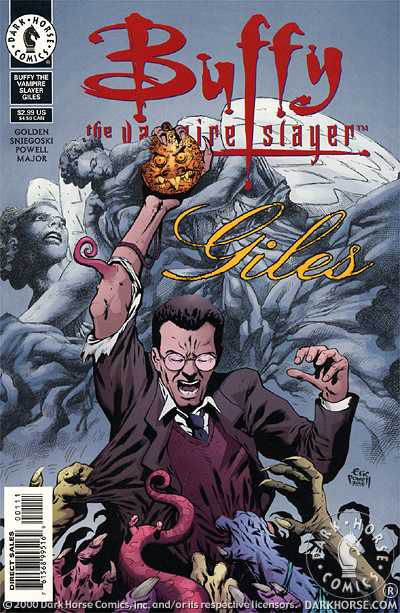 
This has quickly become one of my favorite comics. It’s more Buffy the Vampire Slayer than Dark Knight, which suits me just fine. And like Buffy, it’s really great at capturing all of the awkwardness of trying to fit in at high school while dealing creepy mysteries. I also really love the characters in this comic: Olive Silverlock is trying her darndest to make herself invisible, and Maps is just a tiny ball of enthusiasm. They’re a fantastic odd couple and wonderful guides through this new corner of the Bat-verse. Basically it’s Gotham Central, but with teenagers instead of cops.

Wolf Moon #1 by Cullen Bunn and Jeremy Haun
I am really excited about this one. Cullen Bunn writing monsters is awesome. Jeremy Haun drawing monsters is awesome. Werewolves are awesome. I mean, it’s pretty much a win-win-win here. This six-issue miniseries from Vertigo promises to be a interesting twist on the traditional werewolf folklore. You can check out this interview with Bunn on Bloody Disgusting to learn more. But really, one look at that Jae Lee cover should have you itching to check this out.

The Mighty by Peter J. Tomasi, Keith Champagne, Peter Snejbjerg, and Chris Samnee
All 12 issues of this DC Comics series is being collected and published by Dark Horse this week (oh, comics). You may have missed this when it came out back in 2009, it was one of those really fantastic under-the-radar kind of comics. The story of a Superman-type government sanctioned superhero gone eeeeeeeeeeeevil, the tone and the pacing in this series is close to perfection. It’s deliciously moody and unsettling.

Young Avengers by Kieron Gillen, Jamie McKelvie, Matt Wilson and Mike Norton
Speaking of omniboo, YOUNG AVENGERS IS COMING OUT THIS WEEEEEEEEEK!!!! Kid Loki! Shirtless Noh-Varr! America effing Chavez! *happy dances around the Panels Brownstone* *is asked by Paul to sit down after knocking over several book shelves with vigorous arm flailing* I’m not typically an omnibus-buyer, but for Young Avengers I’ll make an exception. This gorgeous and energetic run is a pop song disguised as a superhero comic. If you’re digging The Wicked + The Divine and have a soft-spot for capes + tights, this is the comic for you.

The Sixth Gun #45 by Cullen Bunn, Brian Hurtt, and Bill Crabtree
I’ve been reading this series from the beginning, and I can’t believe it’s at issue 45 already. The Sixth Gun is so consistently great I’m not sure what to say about it anymore other than seriously you should check this comic out. Becky Montcrief and Drake Sinclair are one of my favorite thrown-together-by-crazy-ass-shit duos. And the Old West on the verge of Apocalypse world Bunn and Hurtt have created is a fascinating place to visit each month.