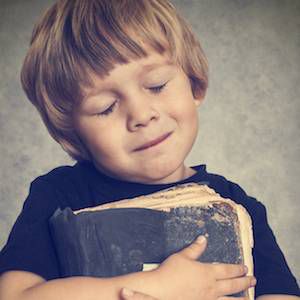 For Christmas my (now) seven-year-old son received the book It Was A Dark And Silly Night, a compendium of original comics from Neil Gaiman, Lemony Snicket, and others. Up to that point he had loved stories, but only if someone was reading to him. He would beg for Captain Underpants and Walter The Farting Dog and would listen for an hour, laughing and plugging his nose, but he struggled with spelling and the requisite attention span when it was his turn to read.

I felt like a bad dad, librarian, and writer. He saw me reading constantly, so my example wasn’t the problem. He just wasn’t making the connection between the work he needed to put in and the ability to read any story he wanted to himself, for himself. And I obviously couldn’t force it.

Enter the “Slightly Intelligent, Largely Laconic Yeti,” the first story in It Was A Dark and Silly Night. My son worked his way slowly through the first page, sounding out the words, but a at a pace that wasn’t quite allowing him to retain the full sentences. He loved the pictures, though, and it helped that the story is creepy at first. He’s a sucker for children in peril stories.

We practiced with that book every night for a week. One night, he pointed at a picture of the yeti looking in a little girl’s window. “What’s happening?”

I pointed at the text box at the top of the panel and the dialogue bubble above the little girl. “Those words tell you what’s happening.”

His eyes widened. I have no idea why this was the moment, but he got it. He put himself to bed early and, when I went in to check on him, he was still trying to read the page by the light of his little lamp.

The next morning, he got me out of bed and told me what was happening in the panel he’d been reading. He’d gotten it right. “And reading is how you know what’s going on!” he said, over and over. A little later that week he said, “What’s a better addiction? Reading, or having me for a son?”

“I’m addicted to both,” I said. “And seeing you read is maybe my favorite thing in the world.”

It got better. Perhaps a week later he had asked for a pen, some paper, and some time to himself. When he emerged, obviously proud of himself, he handed me four pages containing the following story, THE DEMON: 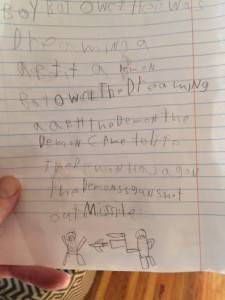 The illustrations were thunderous. The cadence was mildly insane. I was giddy to be a peripheral character. And best of all, the demon was slaughtered with extreme prejudice.

It was a sweet moment. Now he reads every night, without being asked, and can’t wait to tell me what happened in his stories.

However, sweet little story that it is, there was something profound in it, and it took me a while to realize what it had been.

It was the throwaway statement from an excitable little boy, but a statement at the heart of just about everything I hold dear:

“Reading is how you know what’s going on!” He said it with all the excitement the discovery deserved, and readers of this website know how right he is.