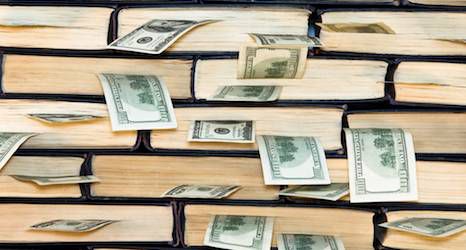 While at The Friends of the Library book sale, I spotted a copy of Time and Again by Jack Finney, a novel my friend Mike wanted. I grabbed it. Flipping through the pages to check its condition, I saw a $100 bill. I slammed the book shut, and looked around.

Should I tell someone, I said to myself. Then put the book on the pile I was buying. Amused paranoia made me wonder if hidden cameras were watching. Could I be in an ABC-TV candid camera sting to test people’s honesty?

What were the rules for this situation? Did they have a copy of Ethics for Dummies over in the philosophy section? I did look, but no. The room was huge and packed. I’m surprised no one saw me spotting the money. As I browsed, I wondered, “Is the money mine or should I turn it in?” It seemed both lucky and unethical at the same time. Finally, I told myself, “Just decide when you get to checkout.” My unconscious mind could weigh the ethical issues while I shopped.

When toting up my haul at checkout, they didn’t even look inside. I could just walk away with the book and money. But it didn’t feel right. Probably an old person had stashed their money in books, died, and their family hauled their lifetime of reading off to the library. The book was a donation, but what about the money? The money wasn’t intended for me, but it wasn’t intended for the charity either.

I reached over and opened the book , revealing the greenback, “What do you do when this happens?” I then realized there were two $100 bills there. “Dang,” I whined to myself, “Why am I so honest!” If my unconscious had known it was $200, would it have made the same decision?

The checkout lady looked dazed, even blown away. “I don’t know,” she said hesitantly, then made a decision, “This is a question for management!” She hurried away. I watched her talk with a group of the Friends for several minutes. They seemed surprised, too. I knew their answer, but what was their ethical considerations? She turned and came back over.

“We’re going to keep the money,” she informed me. Regret showed in her face, but her voice was firm.

“But we’ll give you a free membership to the Friends of the Library.” She led me back to the women who had made the decision. They were all very thankful, and told me how honest I was.

Was I just being a chump? Was I being too honest?

The checkout lady whispered to all of us, “I don’t think I would have told anybody.”

“Does this happen a lot?” I asked, briefly gazing into each of their faces.

“Sometimes,” replied the apparent boss. “But we try to find the money before we put out the books.”

“I wish an old lady had found it,” I said, “One who had a utility bill overdue.”

As I walked out of the library, I imagined what I would I do with an extra $200? I’m not hurting, but $200 would have let me buy something extravagant for my budget. Like make an iPad affordable, or buy a copy of Arms of the Sun by Lady Dorothy Mills, a rare book priced beyond what I allow myself to spend.

The reason I revealed the dough is because I’d feel guilty. Since then, I’ve been asking friends what they would have done.

Some say they would have kept the $200, others said turn it in. Some claim the rule is finders keepers. What about you? Would the ethical parameters been different if I found the money once I got home? What if I gave the book to Mike, and he discovered the $200? I’m sure he would have given it back to me. But if I can rational the money comes with the book, it would have been his.

Would it be ethically different if I bought the book in a used bookstore? What about a garage sale? If a bookstore sells you a rare $15,000 first edition for $2, is the situation different?

There’s no telling how long that money has been in the book. The bills were the old-style Franklins. I’ve stuck money in books before too. Could I have given any away?

The Friends rewarded my honesty with a three-year membership – but charged me for my books – minus the 10% for being a new member. At least I got an essay out of the adventure. A good story is worth $200, don’t you think?

Now I wish I had shouted out when I discovered the money, “Whoa! There’s money in these books!”