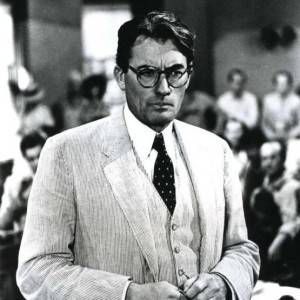 Author’s note: this post was written prior to pre-release revelations that Atticus Finch may not, in fact, be the man we all remember. Its discussions are of the heroic Atticus whom Scout relates in To Kill A Mockingbird, and not of the more human Atticus we’re all soon going to have to reckon with. For now–for as long as the maybe-false hero remains alive:

He’s the ethicist’s answer to Fitzwilliam Darcy, and perhaps the sole reason that lawyer jokes should make us all a little bit uncomfortable. In 1935, he tried to save Maycomb County, Alabama, from its own worst impulses, and though he couldn’t beat entrenched prejudice, we’ve loved him ever since.

Atticus Finch. At the risk of sounding like one of the twittering women lampooned by the Montgomery Advertiser: he is so virtuous, and so radically counter-cultural for the age in which he was conceived, that you can’t help but get a little fangirl. In the course of one novel, Atticus uses logic (mixed with generous doses of kindness and basic human decency) relentlessly to dismantle prejudices and predilections that plague us still–all while raising two children who are better for his example.

1) Choose the moral answer over the popular one. When Atticus is called upon to defend Tom Robinson–who is innocent, and who everyone knows is innocent, but who is set to be sacrificed on the altar of white privilege anyway–he commits without reservation. “If I didn’t defend him,” Atticus says to Scout, “I couldn’t hold my head up in town, I couldn’t represent this county in the legislature, I couldn’t even tell you or Jem not to do something again.” Atticus considers himself answerable to his conscience before the broken standards of his community, and though life sometimes gets difficult because of that, he’s one Maycomber who doesn’t have trouble sleeping at night.

2) Be a bit of an idealist. Atticus knows that a jury isn’t going to acquit Tom Robinson, but he lays out reasons to acquit (Tom’s innocence, most prevalently) clearly nonetheless. He appeals to the better natures of the jurors. He encourages them to hear the truth. He stands before a giant that refuses to be slain and reminds it that we have a moral imperative to be gentle. “Simply because we were licked a hundred years before we started is no reason for us not to try,” he tells Scout. The courtroom is where justice ought to be served. He knows it won’t be. He still works within its confines with integrity.

3) Remember: privilege is crap.  What makes the best shot in the state put down his gun and abhor weapons ever after? A distaste for privilege. “God had given him an unfair advantage over most living things,” and one does not take unfair advantages in the Finch household, either over songbirds or over people. One does not take pride in talents as though they’re earned, or in skin color as though its meaningful, or in family bloodlines as though they substantiate a person. To do so makes one, in Atticus’s estimation, cruel and trashy, and victim to the “usual disease” of prejudice.

There are moments at which Atticus’s words border on aphoristic, and you think that someone this good could maybe only occur in the confines of a novel. But that goodness is so appealing. May Atticus’s world be ours. It’s worth the hope.

Read the novel ten times, and you’ll cry over it more often than not: Atticus names a need in us that’s still very real. And if living according to Atticus’s dictates make a person brave enough to face down a lynch mob–and win–at eight, they’re something worth internalizing.