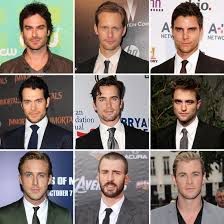 As most of us have heard by now, Charlie Hunnam, known for his role on Sons of Anarchy, who was originally signed on to play leading man Christian Grey in an adaptation of 50 Shades of Grey recently dropped out of the film. The official reason was “overcommitment.” I think he was aware (as we all are) that this would be a career-defining role and he just didn’t want his career to be defined like this. I’m also guessing that the $125,000 insult offer he received to play a role in a film that is going to gross a google bajillion infinity dollars didn’t help. But I digress. Now we don’t have a Grey! Okay, so we just get another Grey! But what if NO ACTORS IN HOLLYWOOD WANT TO PLAY CHRISTIAN GREY?  What if EVERY MAN WHO CAN ACT IN THE WORLD SAYS NO?

I came up with a list of solutions to this potential problem. For the consideration of the Midnight Society, I present to you “What the Producers of Fifty Shades of Grey Should Do if Every Actor in the World Turns Down the Role of Christian Grey.”

2.) A Supercut of Charlie Hunnam From Previous Roles

Maybe the lawyers can find some legalese in the contract that stipulates the right to Hunnam’s image. Between Pacific Rim and Children of Men, this should be good.

3.) Trick an Unsuspecting Actor Into Thinking He’s in a Different Film

Just change the title! You wouldn’t even have to change the character names! I’m sure you could find an actor in Hollywood to whom the names “Christian” and “Anastasia” mean NOTHING. Tell that actor this movie is Sundance bait, tell him this story of power play and sexual politics will propel him to stardom faster than you can say Fassbender. Then, once you get that last shot in the can, tell said actor “Oh, we’re playing around with the idea of a DIFFERENT title.” AND THE REST IS HISTORY!!!

4.) Have Dakota Johnson Play Both Roles

This is my artsiest and best idea. Have Dakota Johnson (the actress playing Anastasia) play BOTH CHRISTIAN AND ANASTASIA. It would be SO ARTSY. It would raise SO MANY QUESTIONS ABOUT POWER AND SELF. And it would be the craziest Oscar bid I’ve seen in years, scratch that, ever.

Christmas is the best time of year NOT BECAUSE OF PRESENTS AND HOLIDAY CHEER but because all those Claymation movies are on TV. Bring a little Christmas to Christian Grey!

Come on, if Dinosaur Erotica can be a thing, we can DEFINITELY do Puppet Erotica. We can get “John Doe NOT CHRISTIAN BALE!!!!” back for the role.

I need to get into the book-to-film adaptation racket STAT.