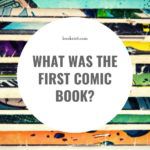 For nearly a hundred years, our pop culture has been saturated with figures from comic books, superheroes and otherwise. The traditional comic book industry alone brings in over a billion dollars a year, and that’s not even touching on the billions upon billions in profit made from superhero movies, shows, video games, and merchandise. It’s a juggernaut. (But not the Juggernaut, that’s a different guy.) But how did all of this get started? What was the first comic book?

Well…it depends on how you define it.

Humans have been combining art with words ever since we invented writing, basically. It could be argued that prototypical comics date back to as early as the 15th century and Hieronymous Bosch, who used sequential paintings to tell a narrative, but I don’t think there’s that much of a through line from Bosch to Deadpool. (Deadpool would probably disagree with me.) Political cartoons emerged in the 17th century and over the next couple centuries would develop techniques we still recognize in comics today, like captions and speech balloons. In the 19th century, humorous illustrated magazines became popular, with the most famous being Punch, which coined the term “cartoon” (meaning a funny drawing) in 1843. (I should note here that the traditional western approach to comics history is extremely U.S.-centric—and to a lesser extent, UK-centric—but the medium has its roots all over the world, particularly Japan.)

The first newspaper comic strips first appeared in the 1890s, most famously with The Yellow Kid by Richard F. Outcault. The character, a New York City ragamuffin, debuted in Joseph Pulitzer’s New York World in 1895 before Outcault made the switch to William Randolph Hearst’s New York Journal a year later, but because Outcault failed to secure the copyright, Pulitzer simply continued publishing Yellow Kid strips in the World with a different artist, competing with Outcault’s strip by the same name in the Journal. Both ended by 1898, but not before bequeathing a name to the sensationalizing techniques of late 19th century newspapers: yellow journalism.

The Yellow Kid was certainly not the only strip of the era—The Katzenjammer Kids is another famous one that astonishingly ran all the way to 2006, and some later WWI-era strips like Gasoline Alley and Popeye (yes, that Popeye) are still with us. But it’s notable because in 1897, The Yellow Kid in McFadden’s Flats was published. It was only a reprinted collection of Outcault’s strips for the Journal—but it said “comic book” on the back.

The Yellow Kid in McFadden’s Flats was for a long time considered to be the first comic book, but most historians now give that honor to Histoire de M. Vieux Bois, by the Swiss caricaturist Rodolphe Töpffer, known as The Adventures of Obadiah Oldbuck in English. It was first published in Geneva in 1837 and unlicensed English-language versions appeared in the UK and the U.S. in the 1840s. Moving the date of the first comic book 60 years earlier has opened up a whole new era of “Victorian comics” that is still being explored and studied.

But let’s be honest—Obadiah Oldbuck and even the Yellow Kid bear little resemblance to what we now think of as a comic book, so let’s get a little more modern. The Yellow Kid in McFadden’s Flats led the way for book-shaped reprints of other popular strips of the turn of the century, like The Katzenjammer Kids, Happy Hooligan, and Mutt & Jeff. In 1922, King Features published the first monthly comic book, with the creative name of Comics Monthly, but the content still consisted of reprints.

In 1933, Eastern Color Printing published Funnies on Parade. Not only was this still reprints, but it wasn’t even sold on newsstands—rather, it was sent as a free promotional item to customers who sent in coupons clipped from Proctor & Gamble products. But it was the first comic printed at the now-standard modern size of 6 5/8 by 10 1/4 inches—the apocryphal story being that the Eastern Color sales manager folded a newspaper into quarters and decided that was a good size for a book. Hey, it’s as good a reason as any, right?

That same year, Eastern Color teamed up with Dell Publishing to release Famous Funnies: A Carnival of Comics, which is also considered by many historians to be the first true American comic book. Again, the contents consisted of reprints of popular strips, but the 10¢t price tag went over well with Depression-era consumers, and Famous Funnies went on to be a monthly periodical.

So we’ve got the size, we’ve got the price, we’ve got the release schedule…but we don’t have original material. Enter National Allied Publications, who would later change their name to honor one of their bestselling titles: DC Comics. In February of 1935, they released their very first publication, New Fun #1, which was the first comic book consisting entirely of never-before-published content. Three years later, they published Action Comics #1, introducing a brand-new character and the first superhero to be born in the comics: Superman. And the rest is history.

So what was the first comic book? Again, it depends on how you define it. If you care about the combination of words and pictures in a pamphlet telling a story, it’s The Adventures of Obadiah Oldbuck. If you care about the actual phrase “comic book,” it’s The Yellow Kid in McFadden’s Flats. If what matters to you is that it looks like a modern comic book, with the traditional monthly release schedule, it’s Famous Funnies.

Me, I’m less interested in pinning it down to one particular book, when really that’s splitting hairs, and more interested in why we love that combination of words and pictures so dang much. (Also, Superman. Love that guy!)

Want to learn more about comics? Check out a beginner’s guide here and a guide to the most popular comics on Goodreads here. If you’re unsure about what terminology to use, you can check out this guide, and if history’s your jam, you can read about some of the proto-superheroes who predated Superman over here.