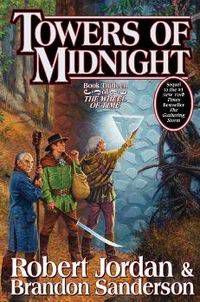 Towards the end of the book, there are a few chapters in The Towers of Midnight that are from Aviendha’s perspective.

Aviendha has gone to Rhuidean to become a Wise One among her people, the Aiel. To do this, she must walk through these magical constructs that will cause her to see visions. She begins seeing things she doesn’t understand through the eyes of a different person with every vision. At first, she is a young girl, starving and trying to sneak into enemy territory to find some food. They mention carriages that don’t need horses, and light that needs no fire – presumably cars and electricity. So it’s somewhere in the future.

The girl is shot and killed by a Seanchan soldier as she rummages through the trash for food. As she dies, they call her “Bloody Aiel.”

Aviendha is understandably confused. How could that scrawny, hungry girl be of the great warrior race Aiel? But each progressive vision shows her that these are her people fallen and broken, a shadow of what they once were. And each vision the woman whose mind she inhabits is a generation closer to her own. She sees the whole train of how the Aiel end up becoming next to nothing.

And it was so depressing for me to read. These are not books that usually make me cry – I mean, deaths and all, I don’t think they’ve ever made me even tear up. But this short section of Aviendha’s perspective…I had to force myself to keep it together since I was on the train.

I don’t know that it was the writing. I think it was more that it took me back to every Jhumpa Lahiri book I’ve ever read.

Jhumpa Lahiri, author of books like The Namesake and Unaccustomed Earth, is a beautiful, beautiful wordsmith. I love her and I can’t stand reading her all at the same time because her stories make me feel so bleak. Much of her writing has this idea that if you’re born of two cultures, you’re not really of either one. You have no place in the world. You are, effectively, without any sort of home or community.

The degradation of the Aiel brought to the surface fears I have about my relationship with my Indian culture, being a first generation born, and living in America. There is a moment where Aviendha hears her great-great granddaughter’s family completely misuse and over-simplify a cultural term. What’s terrifying is the implication that this seemingly innocuous thing can mean, in just a few generations, that a culture will fall. Things my mother intrinsically knows, I have to google. What if in the next generation, there’s too much disconnect to do even that?

While a lot of the cultural deterioration in the Wheel of Time is a direct result of generational gaps and marrying two cultures, much of it has to do with the invasion of the Seanchan. I’ve had a vague sense of unease while reading about the Seanchan, who are essentially colonizers of other countries. This is who the Aiel are fighting against. For the Seanchan it is better for other countries to be broken and governed by a superior culture than it is for them to govern themselves. Because, in the Seanchan’s eyes, this group of children just doesn’t know any better.

Colonization, cultural dilution and in some cases, eradication, these are a part of my past and my present.

Lahiri is a little more dedicated and ruthless with cultural dilution and irrelevancy as a theme, while Sanderson and Jordan speak of it more optimistically. All of the races and cultures that are written of in the Wheel of Time series are fiercely loyal to their people. Whether it’s the Aiel or the Sea Folk, they are suspicious of those outside. With Egwene’s proposal of training women in all three, and Rand’s pulling of the Aiel back into society, it’s seems that Sanderson and Jordan are striving for a happy medium of cultural loyalty and progress by way of learning from other societies.

I don’t know if Egwene’s proposal will be successful or not, or if it will lead to so much change within each respectful culture that they’ll break and morph into something unrecognizable. This may not be a bad thing. I don’t think that culture and identity are something that should remain stagnant, but there are beautiful parts to these cultures and it’s sad to see them disappear along with the bad. I think of my fears of cultural loss, and I know that most of it stems from not being Indian enough for India and not American enough for America. A diluted culture is more than just acclimating to a new one, it changes your very identity. Where do you belong if you don’t fit anywhere?

With this latest reading of Aviendha’s chapters, the fear is that you don’t belong anywhere. You (in this admittedly fictional and extreme case) die out. With this in mind, I can only conclude that, like in Lahiri’s writing, maintaining any part of your culture while immersed in another is not a possibility.

This was all very sad and depressing. But something really great came out of it. When I told my co-What-the-WoT reader, Jenn, what I was thinking about, she made this amazing Venn Diagram: 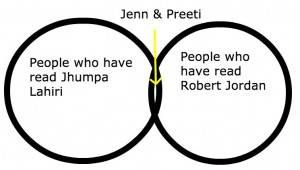