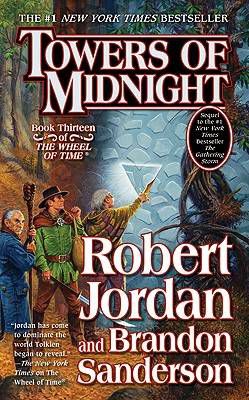 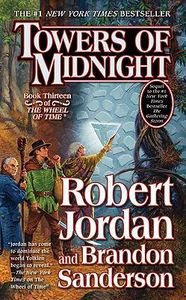 PC: I like that I thought this project was going to take at least through April.

JN: Yeah, we may have miscalculated slightly.

PC: This book should be called “Mat is Awesome and Everyone Else is Boring.” Although I am hating Perrin a little less, since he figured his shit out. AND since he totally saved Galad, I loooved that.

JN: Right? Perrin has stepped up in this book.

PC: Finally. I was a little let down by Graendal’s big plan, though. Like, “Oh ho ho ho I have a secret!” IS IT A BIG TROLLOC ARMY LIKE EVERYWHERE ELSE? GOOD JOB, GRAENDAL.

PC: I would have liked a little more Rand in this book, even though he’s going a little Jesus-y for me.

PC: This book IS doing a good job of getting me excited about reading the last one — and sad.

JN: I actually feel like Towers of Midnight is not making me excited so much as antsy. “OMG THE LAST BATTLE IS UPON US! (BUT NOT FOR 600 MORE PAGES.)”

PC: I think the Last Battle is going to be basically the whole final book, because time is moving really weirdly in this one. The whole book takes like 6 days.

JN: This was actually one of the book’s problems, for me, because Perrin’s storyline is so far behind Rand’s that it seemed like Tam al’Thor was in three places at once. He kept coming up — “and then Tam did this” — and all I could think was, Where are you Tam?! I don’t think Sanderson is doing a good job of making it clear when everything is happening and it’s driving me a little nuts.

PC: Agreed. Slightly different topic: you know how we keep questioning why everyone is so amazing at everything? Egwene finally talked about it! I loved when she said, “DO YOU WONDER WHY THERE ARE SO MANY TALENTED PEOPLE BEING BORN?”

JN: Yessssss, I had the same reaction. It seems like the books are self-aware enough to poke fun at themselves. Related confession, though: not loving Mat’s voice so much. It feels a little like Sanderson is doing a Mat impression? Or making him very much the butt of every joke.

PC: Too ridiculous, yeah. On the other hand, I thought the fight with the gholam was awesome. I’m reading Mat as exaggerated, because he’s so far from what he was.

JN: It’s true, and that whole thing when he visits Perrin with a badger in a sack was kind of awesome. Also: Power hammer! I love how Perrin basically made Mjolnir.

PC: Right!? In the meantime, the Seanchan are making me so anxious! Especially after Aviendha’s visions.

JN: That really was a nailbiter of a chapter.

PC: I almost cried on the train. The thought of the legacy going so wrong is so depressing!

JN: Speaking of things that almost made us cry….

PC: Oh, you mean like WHEN MAT’S EYE GOT RIPPED OUT OF HIS FACE? I LOST MY SHIT. Just completely lost it, and had to put the book down.

JN: My brain skipped a beat, I had to read that page twice. And he is so nonchalant about it! “Those bastards, they took my eye! Oh no, what if Tuon doesn’t like me anymore? And I can’t fight right?!”

JN: I have to tell you, I’m really conflicted about MoirThom. ThomRaine.

JN: It feels incredibly out of left field. I know it’s been a long time since I read the prior books, and I didn’t technically read the most immediately preceding books, but really? They are calling each other darling and trying to get married five minutes after the rescue? While Mat’s missing eye is bleeding all over his face?!

PC: Well, I do feel like there were hints. And they’re sweet!

JN: I guess, it just feels a little too pat to me. So what are we anticipating for the next book?

PC: What if Mat misses the Last Battle because of Caemlyn and Verin’s stupid letter? He has to be there. He is the best general they have!

JN: Oh god, Verin. You were so smart, and yet So. Dumb. And how many Forsaken are left at this point? They are impossible to keep track of, what with the name-swapping and balefire and vegetative states and whatnot.

PC: Related, I’m afraid that some mystical evil person is going to go after Perrin again, since Graendal is dead presumably.

JN: Right, since he’s the only ta’veren who hasn’t lost an appendage at this point.

PC: Good lord, this is intense. What is going to fill this hole, when we’re done?

If you’re reading along at home, we imagine you too are going faster than expected. If not, sorry! Stay tuned for our review of A Memory of Light in, let’s be honest, the next couple of weeks.