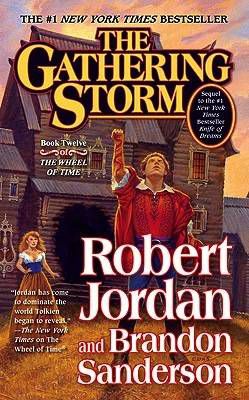 JN: I think it is safe to say that we both loved this book, given the all-caps texts and chats that occurred during the reading process.

PC: As I made it my February Riot Round-Up book, suffice to say that I was a big, big fan. (Also, we need to give a shout out to Dustin at Macmillan for finding a box big enough to send me six gigantic Wheel of Time books!)

To my mind, there are a few important topics of discussion with the first being: Is Egwene the best ever? If you say no, I might have to kill you. I am 1,000% converted to Team Egwene. And I say this as someone who declared on Twitter, before we started all this, that she was a total killjoy.

PC: Egwene is amazing. I’ve actually been a big Egwene fan since TEotW (Hipster-Wheel-of-Time-Fan). I liked how she was all, “Excuse me, I am also coming on this adventure and you can’t stop me.” And oh my goodness, I’ve never been more stressed out than when Gawyn, Gareth, and Siuan took her from the White Tower before her plan was finished! And I love that she got her revenge on the Seanchan. I want so badly to see a poster of her raining down madness from the walls of a broken tower. What an image! Oh, and that scene when Elaida beats her, and she just quietly takes it. She is amazing in TGS. Amazing. She’s becoming the strongest woman in the series, I think. Which may or may not be to her detriment in the next few books, because as we know, the WoT of is all about needing both men and women to accomplish things.

JN: Yes! My bet is, she will be the least featured character in Towers of Midnight. On a less OMG note, how hard is it really to be a swordmaster and/or the strongest channeler in a generation? Can we talk about how everyone is running with heron-mark swords and defeating undefeatable opponents? And some of them don’t even have the ta’veren excuse.

PC: Yeah, the heron-mark sword is way overused. Tell me again how Gawyn defeated two warders. Sure. I believe it. Not. All of the sword forms are vaguely sexy sounding though… The Viper Flicks its Tongue… The Parting of the Sheets… You see what I’m saying?

JN: I am shocked, shocked! Sometimes a sword is just a sword, Preeti.

Another thing I’ve been wondering about is if it’s possible to tell the difference between Sanderson’s writing and treatment of the characters, and Jordan’s. I’m not sure I can, really. But that might be because I only read recaps and didn’t reread the others. Further question: do we care, if there is a difference?

PC: I think Sanderson is funnier. I found myself laughing out loud at certain parts of this book. Other than that, I don’t think there’s too much of a difference between the writing, and any differences that do show up don’t really bother me. I feel better knowing that Sanderson was working off Jordan’s notes, though.

JN: Absolutely. I remember when they announced, after Jordan died, that he had left detailed notes for finishing the series. I felt this huge surge of relief! Which made me feel a little bit weird, and also a little bit obsessed. Speaking of things I am obsessed with: OH MY GOD THE ENDING. The ending needs some serious talking about. Both because it gave me all the feels and because I have serious concerns about Rand’s ability to hold things together until Tarmon Gai’don.

PC: CAPSLOCK IS THE ONLY ACCURATE WAY TO EXPRESS MYSELF REGARDING THE ENDING. All of it was amazing. Such great pacing! And the character developments! And Rand! On a mountain! I agree that he is worrying. The schizophrenia leading up to the end was pretty terrifying. And oh man, Tam. I loved the entire Dragonmount scene though. All of it. But I do have to say, I think I’m going to miss Lews Therin’s crazy rambling and crying in Rand’s head.

Speaking of crazy people and being unreliable. How about kicking us in the face with an unreliable narrator in Book 12, AHEM VERIN. Now I’m nervous that I can’t trust anybody’s point of view about anything.

JN: Oh god, Verin! First I loved her, then I hated her, then I loved her again — so many feelings. That Big Reveal Scene with her and Egwene had me absolutely on the edge of my seat. And I have to say that about pretty much the entire book. There were only a few chapters that didn’t have me freaking out, yelling “What will happen!?!” at the pages — and those were the Perrin chapters. Those were … not exciting. Maybe it’s because he doesn’t have the same super-powers everyone else in his age group seems to be developing, or maybe it’s just because he is reeeaallly mopey? But Rand is mopey and his chapters were still exciting, so I don’t know what is going on there.

PC: Agreed, Perrin has always kind of been my least favorite of the ta’veren. He just gets so indecisive and then there are pages and page of his indecisiveness. I can’t take it. Rand’s mopeyness works because there is so much else happening around him. And his mopeyness has a profound effect on the other characters. Perrin’s chapters are just Perrin (and Faile thinking about Perrin).

Another issue: zombies. The bubble of evil that forced the ENTIRE TOWN to turn into ZOMBIES every night? I’m wondering if this is Sanderson’s decision, or if he based this off of Jordan’s notes, because this is the first time I’ve felt like something in the text was so obviously a supernatural creature that exists in pop culture already. It was kind of jarring in that sense, because even though Mat is awesome and it was fun to see him kick major zombie butt (… ™ 90’s Macaulay Culkin, I think), I spent the whole chapter being distracted by the fact that Dragonmount has zombies.

JN: This is an excellent point. Although (and I feel like this is something I missed in the few books preceding these, as several characters reference it but we don’t actually see it on-screen) there is a lot of “Hey remember when the dead walked again?” flying around, which makes me think the nightmare village is only one of several zombie incidences. But I digress — as to the actual point you are trying to make, my answer is: maybe?

PC: That’s true, I guess when talked about the dead walking again, I for some reason did not think of zombies, but rather creepy people who didn’t realize they were dead. Interpretation FTW!

My final concern is the potential boringness of the last battle. If everyone is weaving and unweaving and invisible weaving and just in general throwing invisible power around, are they just going to be staring at each other?

Although, Perrin. Perrin’s going to carve up some of that Shadowspawn with his hammer (or axe? I can never keep it straight, there’s been a lot of drama on that front).

JN: Right. It will be just like in the (book version of) Breaking Dawn, where they stare at each other for hours but no one actually fights. Except Perrin, who will spend the whole time fighting with himself over whether he should wield a hammer or an axe. Worst Tarmon Gai’don ever!