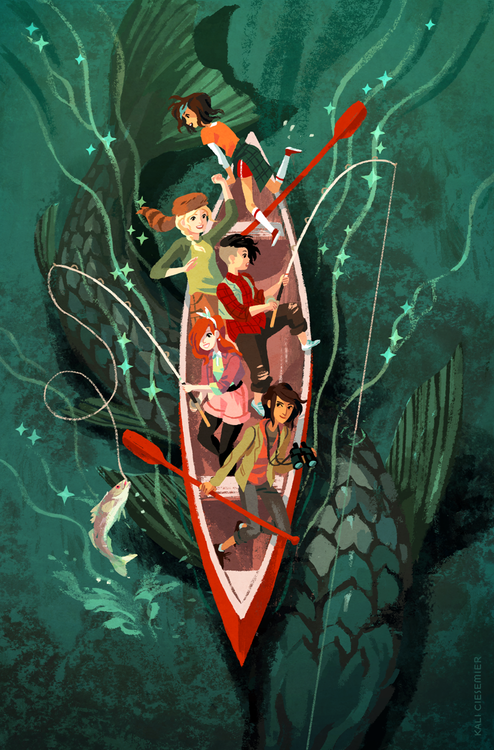 Welcome back, campers! The pages of LUMBERJANES contain mysteries upon mysteries and references upon references, and our goal here at What the Junk is to decode at least a few and gather clues along the way. This time we’re looking at issues 2 and 3, down the river and into the caves.

Holy Mae Jamison (sic): Not only was Mae Jemison the first African-American woman admitted into the space program and the first African-American woman in space (aboard the 1992 Endeavor), but pre-NASA she earned her MD at Cornell, worked in a Cambodian refugee camp in Thailand, and served in the Peace Corps. While in space she conducted research on the crew, particularly on motion sickness and weightlessness. And, after leaving the space program, she established the Jemison Group, a company that seeks to research, develop and market advanced technologies. Our role model list just keeps growing.

RIVER MONSTER: There are a lot of river-dwelling demons out there, but #2’s monster appears closest to the Native American Horned Serpent. They lived in freshwater lakes and rivers, and were described as dragon-like with horns and long teeth. They were also thought to have weather powers, and could bestow powers on those who defeat them. (And now I’m imagining April with the river version of Falcor. It works.)

What did we learn today? Jo at least is pretty sure that the golden eyeball she took from the fox in #1 is responsible for attracting danger. She also learned never to underestimate the power of the scrunchie; it’s a big day for Jo, ok?

Moving right along to Issue 3:

We may not know what the shiny-shiny in Rosie’s cabin is, but now we know where it comes from!

Fibonacci sequence: While the chasm-crossing is very Indiana Jones and the Last Crusade, the girls don’t need Latin — they need math. The Fibonacci sequence, named after its creator, has applications in algorithms, data structures, even stock trading. It’s also observable in nature — and in pop culture! Other appearances include in Aronofsky’s Pi, The Da Vinci Code, xkcd, Philip K. Dick’s VALIS, and A Wrinkle in Time, to name just a few.

Caesar Shift cipher: The Caesar Shift cipher (said to have been used by and named after the Roman conqueror himself) is a substitution cipher. It works by replacing each letter of the alphabet with a different letter a fixed number of positions away. For example, if you shift the alphabet three spaces, so that a = d, brx jhw zrugv wkdw orrn olnh wklv.

Vigenère cipher: Created in the 16th century, the Vigenère cipher uses two or more cipher alphabets to encrypt your message, with a word or phrase as the encryption key. You need to build a square to encode your message — or, you know, use the Internet.

Playfair squares: The Playfair cipher also uses a grid; it is complicated enough (and I am unpracticed enough at logic games) that I refer you to Rumkin’s explanation. I can tell you that it was created by inventor Charles Wheatstone, popularized by Baron Lyon Playfair, utilized by the German forces in WWII, and analyzed by Dorothy Sayers in Have His Carcase.

The Truth is Out There: What good cave of mysteries lacks an X-Files reference? Not this one! Can’t you just see Scully coming in to teach a Forensics 101 class to the ‘janes?

Open Sesame: We’re all familiar enough with this one, but did you know that Open Sesame comes from One Thousand and One Nights (sometimes known as The Arabian Nights), specifically the tale of Ali Baba and the Forty Thieves? What I’m saying here is, I’m hoping we get a genie at some point. I don’t think that’s too much to ask.

Where the Phillis Wheatley: Phillis Wheatley was a pioneering African-American poet and a slave of John Wheatley. She was instructed in mythology, theology, and literature by the family, and published her first poem at the age of 12 in the Newport Mercury. You can read her only book, Poems on Various Subjects, Religious and Moral, over at Project Gutenberg. Wheatley was the first African American and first U.S. slave to publish a book of poems (in 1773), and only the third American female published poet.

Issue 3 packed quite a punch — not only did we get cave adventures, but each ‘jane got to showcase some of their own particular talents. This is also the issue where I joined the Cult of April: she wins an arm-wrestling contest with a stone statue, then thanks the statue and gives him some tips. If that’s not a class act, I don’t know what is.

While we don’t have a MacGuffin, we have been left with some questions. Molly’s serious attachment to her hat seems to go beyond the usual “favorite piece of clothing” level. And I know it’s been proven to be an anagram, but does anyone still want the Kitten Holy to be a real thing?