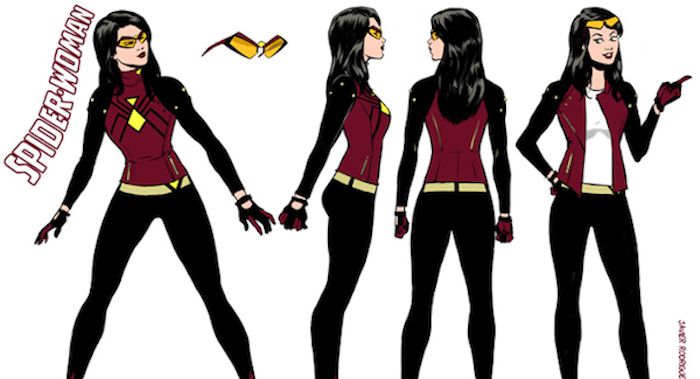 I was so excited when I found out that Spider-Woman is getting a new ongoing series this spring. I love Jessica Drew, and her most recent series by Dennis Hopeless and Javier Rodriguez was phenomenal. Yay Jess!

I was…less excited when I found out that she was also getting a new costume.

See, Spider-Woman’s costume carries a bit more rhetorical weight than most superhero ensembles. From her first appearance in 1971 to 2015, she wore essentially the same one, save for an early alteration to her mask to reveal her long, flowing hair. The costume started out as a pretty standard spandex onesie in her trademark colors of red, yellow, and black. Sure, the lines on it are designed to draw attention to her breasts and genitals, but that’s so par for the course with female superhero costumes that her early appearances are fairly innocuous. 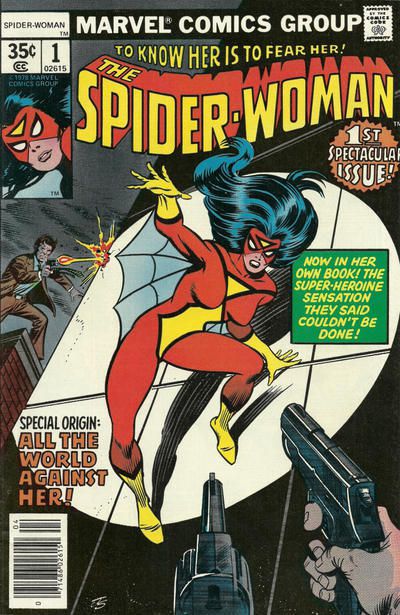 The first issue of Jessica’s first solo series, with a costume design by Marie Severin

As the years went by and comic book art became more cheesecake-y, though, Jessica’s costume became increasingly vacuum sealed and logic-defying (hint: breasts don’t look like that in tight fabric). She reached her nadir in the infamous Milo Manara variant to 2014’s Spider-Woman #1, in which she is…crouched? Well, posed, at least, on a rooftop, in a position so anatomically impossible that Marvel pulled the cover amidst a wave of criticism and ridicule. 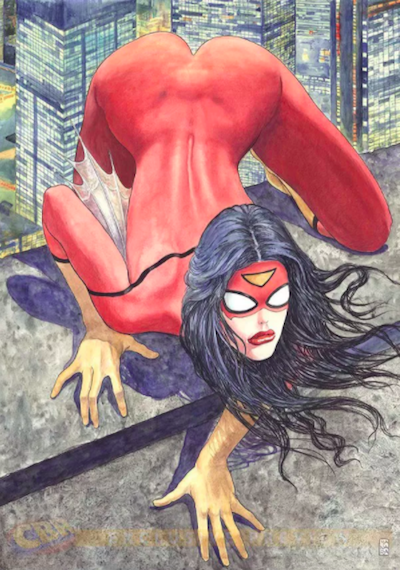 Four issues later, she got a new costume, courtesy of the great Kris Anka. In Spider-Woman #5, she appears in black leggings and motorcycle gloves, flat red boots, kickass shades, and the dopest moto jacket the MU has ever seen. It’s comfortable! It’s stylish! It’s rad as hell! 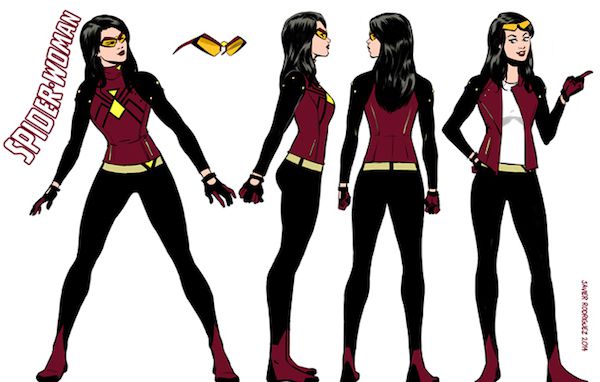 It was also very clearly a response to a sea change in superheroine costume design that was going on at the time. Jessica’s new costume appeared in March 2015. Just a few months earlier, the fan-favorite character Spider-Gwen—and her amazing costume—debuted in Edge of Spider-Verse #2 (September 2014) after making a huge splash on the internet. A month after that, Batgirl donned her also fan-favorite “Batgirl of Burnside” costume in Batgirl #35 (October 2014). In 2015, Black Canary and Starfire also got costumes that were visibly more comfortable and, not for nothing, designed by women. 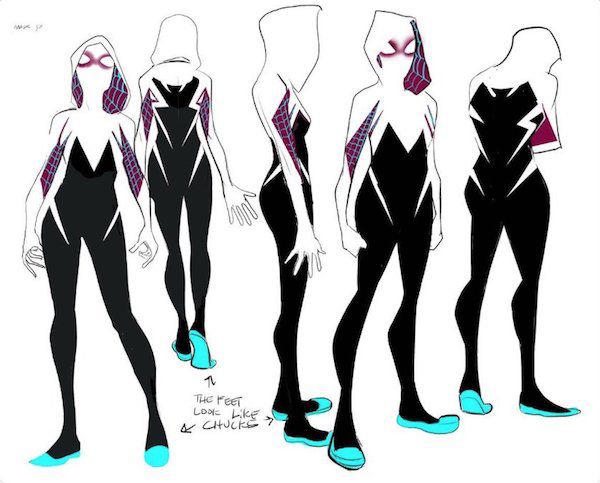 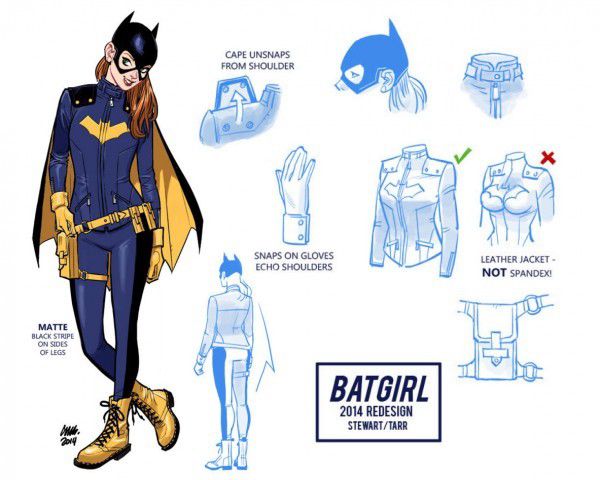 What do all these costumes have in common? Aside from just absolutely solid design principles, they look comfortable and easy to move in. They mostly have flat shoes. They don’t cling. No one’s breasts and buttocks are vacuum-sealed into fabric that defies the laws of physics.

If you are a cis man and have always had the experience of comic books catering to you as their target audience, I don’t know if I can adequately explain the difference between seeing a female character in an implausible body stocking and seeing her in something comfortable, wearable, and cognizant of real-world fashion. Comics are a visual medium, and convey meaning with so much more than speech bubbles. When an artist clothes a female character like her body exists in three-dimensional space, it tells me that the comic is treating her like a person and not a fetish object. It tells me that I, the female reader, am welcome, rather than negligible at best and unwanted at worst.

Given that, it feels pretty bad when that costume is taken away.

Batgirl lost her beloved Burnside costume in late 2018, in exchange for an incomprehensible design by DC’s current Bat-darling Sean Gordon Murphy that involves some kind of uncomfortable chest harness and tiny little ears poking in a non-Euclidean fashion out of a wild mess of hair in her eyes. (Seriously. Read Batgirl from issue #27 on and try to explain where those ears are coming from.) It’s worth noting that the new costume is meant to be inspired by the wonderful Marco Martin design from 2003’s Batgirl: Year One—but the Martin costume has, among other things, a tidily-gathered ponytail instead of windblown music video hair. 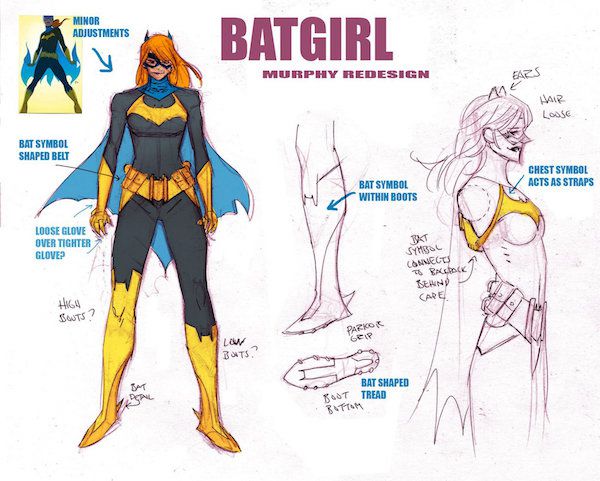 Meanwhile, Spider-Woman ditched the moto jacket in favor of her original costume for last summer’s Strikeforce. Now she’s got a new bodystocking, designed by Dave Johnson, and the excruciatingly skintight variant covers are already rolling in. 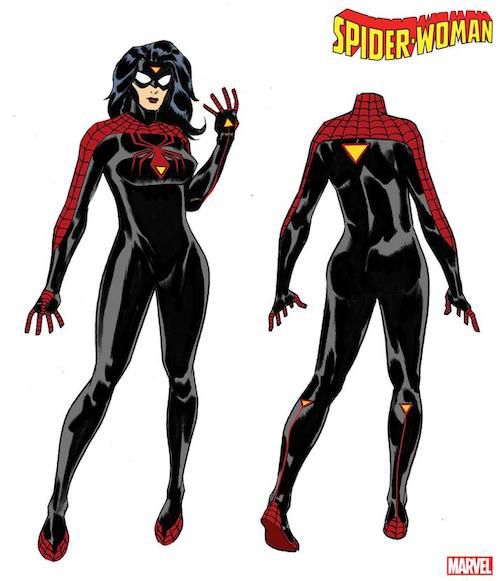 Look, obviously there’s some level of personal taste involved in all of this. I like the Burnside and moto jacket looks, and I don’t like the newer redesigns. I don’t expect every reader to agree with me, regardless of gender.

But to me, there’s something more at play here than changing up a costume for the heck of it. The redesigns of 2014–2015 were capitalizing on a particularly trendy aesthetic, but also on a drive for a wider, more inclusive readership. They were deliberately female-friendly costumes for female-friendly books. 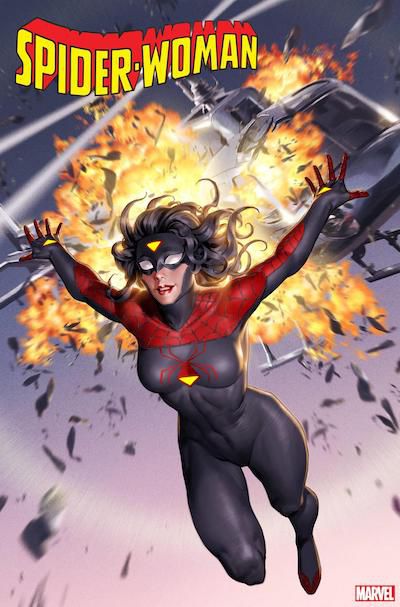 Finally, our long national nightmare of not being able to see every crevice of Jessica Drew’s body is over (cover by Junggeun Yoon)

To go back to costumes that showcase nipples and bellybuttons through whatever they’re made of tells me that DC and Marvel were never actually committed to drawing in those audiences. That the Converses and jackets of five years ago were a sop to all those feminists shrieking about the Manara cover, and now that that’s died down, they can finally go back to catering to their true audience: dudes who think that if they can’t see the exact outline of each gravity-defying breast, a female character is insufficiently sexy to be worthy of having her story told.

“Did you think comics were for you?” these costumes say to me. “That was stupid of you.”

I have been trying to stay on board with Batgirl’s latest adventures. I plan to check out the new Spider-Woman series, because it has a female writer and I do love Jessica Drew.

But I am so tired of two steps forward, one step back with this industry. And I’m counting the days until DC and Marvel start treating their female characters—and readers—as fully real all the time, and not just as a temporary stunt.