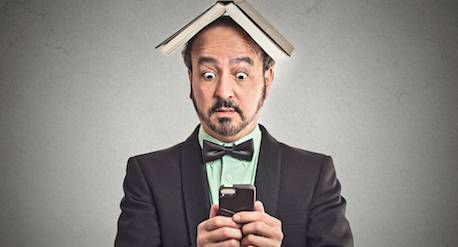 Recently I reread one of my all-time favourite twisty novels, Fingersmith by Sarah Waters, and it got me thinking about what is it exactly makes for a truly satisfying literary twist.

Now, I admit that I am generally a pretty credulous person (for a point of reference: I am the grown woman who gasped “WHAT?!” in the theatre during Frozen when it was revealed that Prince Hans was Not A Good Guy. One of my friends will never let me live it down). So while I may not be the best judge of how surprising a twist is, the fact that I fall for anything makes me a pretty experienced judge of the quality of the fall.

After some thought, I came to the following four-part, highly unscientific rubric for determining what makes a truly delicious twisty book. For illustrative purposes, I will be using examples of twists Fingersmith, a poplar, award-winning and, most importantly, fifteen-year-old novel. In other words: here be spoilers. Consider yourself forewarned.

Stakes
Let’s start with the basics: a good twist has to have an ah-ha! factor. It has to be juicy. It has to raise the stakes of the plot, otherwise it’s just … a thing you didn’t know before and now you do. A good twist should pull you further into the story and make you eager to find out what happens next, even if it falls close to the end. This seems obvious, but I think we have all read a book or watched a film in which a twist was revealed and our overwhelming reaction was “Huh.” If your twist doesn’t inspire gasps or eye-popping or an expletive of some sort, it probably isn’t juicy enough.

The difference between a good twist and a great twist, though, is that the latter not only moves the plot forward, it also propels character development or resolves an essential tension in the text.

For example: the revelation in Fingersmith that Maud has been double-crossing Susan all along and is planning to send her to a mental asylum. This not only drives the plot of the second-two thirds of the text, is also sets up the resolution of the problem in the novel’s romance plot. Throughout the first third of the novel, we see Susan fall in love with Maud even as she plans to betray her. Despite her involvement in this cruel, mercenary scheme, Susan is a sympathetic character and the reader wants to root for her and Maud. But we can’t. It’s impossible to do so in good conscience when Maud is the innocent victim of Susan’s plot; it would be repugnant. The twist that Maud was double-crossing Susan all along not only pushes the plot forward down a number of dark, even-twistier lanes but also because it allows for the resolution of the romance plot problem: Maud and Susan are as terrible and trapped as each other, which means we can ship them with impunity.


Also fairly obvious: a good twist is, you know, a surprise. It can and to a certain extent should be telegraphed (we’ll get to that in a minute) but if your average reader (i.e. someone a little cannier than me) sees it a mile away, that sort of takes the thrill out of the thing. A reader should have a sense that something isn’t quite right, or that someone is behaving oddly, but they shouldn’t be able to put their finger on exactly what that is. Caveat: unpredictability is not the only or highest goal. Your twist should not be so out-of-left-field that it lacks …

Plausibility
So first up: just as a twist is less fun if you see it coming, it’s no fun at all it you don’t believe it.

By plausible, I don’t just mean “obeys the basic laws of physics.” Twists should also possess a ring of emotional truth. So while it might be difficult to actually predict the revelation that Susan and Maud were essentially swapped at birth by their mothers, there a re a number of clues that in retrospect, help this twist feels believable and earned: the constant doubling of the two women, the mystery surrounding both their mothers’ pasts and the untrusthworthiness of the people surrounding them.

How much leeway an author has in terms of plausibility can, I think, vary depending on mode and tone of the book. An author shooting for grit and/or realism is likely setting themself up for a higher bar of plausibility than something “escapist.”

A corollary of the plausibility requirement is that a twist should not be so needlessly complicated that it becomes impossible to follow. The goal of a twist is for the author to surprise and delight or thrill their readers, not to impress themself.

Foreshadowing
Foreshadowing is often a good tool service of the former, but is also important on its own merits. Part of what makes a good twist satisfying is looking back on what came before and being able to spot what you should have seen all along. Hindsight is 20/20 and after a good twist, it’s also fun. 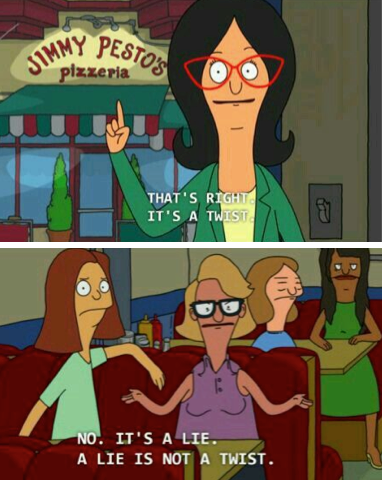 For example, the twist that Maud is Mrs. Sucksby’s (supposedly dead) biological daughter and that Mrs. Sucksby was planning to betray her adopted “daughter” Susan for Maud works because while at the time Susan trustee her completely and believes her to be honest or reliable, there are signposts for the reader in Susan’s narration that Mrs. Sucksby is untrustworthy and that she does not have Susan’s best interests at heart. The reader knows that she is a thief and a baby farmer and that she is cagey about Susan’s past. We also know that Susan suspects Mrs. Sucksby looks at her face and sees the daughter she lost; Susan does not describe it as such, but the reader gets the distinct impression that Mrs. Sucksby does not love Susan for her own sake. We also know that Susan does love Mrs. Sucksby and is not unbiased when it comes to her.

All this, of course, is one woman’s opinion and even I admit it isn’t an exact science. There are surely books that follow all of these rules and still produce unsatisfying twists, or ones that break them and still manage to be thrilling (and I’d love to hear about them). Now if you don’t mind, I’ll be over here – holding my breath and biting my nails.