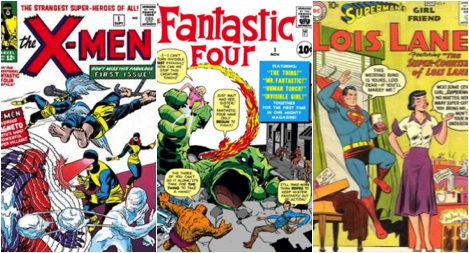 Last time on this irregularly-scheduled comics history feature, we talked about the earliest era of superhero comics: the Golden Age, which stretched from 1938 to roughly 1955. Today, let’s talk about the Silver Age. Spanning approximately 1956 to 1970, the Silver Age defined the public perception of comics for decades and is arguably the industry’s greatest era (though personally, I think you can make a strong case for today!). 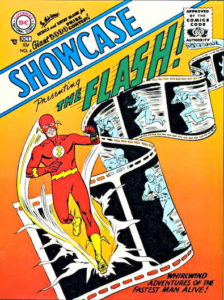 As we talked about last time, once Superman hit the stands, superheroes in general exploded in a big way throughout the duration of World War II. Once the war was over, though, superheroes fell out of vogue, giving way to hotter genres like horror, crime, romance, and war comics. All but the most popular of the spandex set virtually disappeared from spinner racks by the early 50s. A guy in tights punching out a ne’er-do-well just couldn’t compete with an oozing slime monster devouring scantily clad women.

So what put superheroes back on top again? An unlikely (and inadvertent) savior: one Dr. Frederic Wertham and his crusade against the corrupting influence of comics, capped off by his book, Seduction of the Innocent. You probably know Wertham as the guy who got all hand-wringy about the subtext between Batman and Robin, but that was a minor point on his agenda; though he had his issues with superheroes, the violence, gore, and general anarchic lawlessness of crime and horror comics were his main targets. Wertham and other “concerned citizens” mounted a campaign against the comics industry that led to what today seems like mass hysteria: Senate hearings, thousands of comics torched in public bonfires, creators actively shunned when they told people what they did for a living. 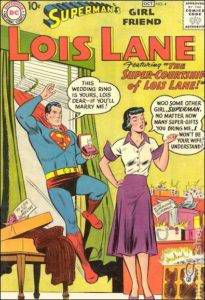 The comics industry, like the film industry twenty years prior, saved itself via self-censorship, creating the Comics Code Authority. Under the Comics Code, anything untoward was banned. This ran the gamut from the obvious sex and excessive violence to thought-crime-level stuff like disrespect for authority or evil going unpunished. Paired with the docile, family-centric values of the 1950s, characterizations shifted: populist rabble-rouser Superman became a paragon of patriarchal authority and nocturnal spook Batman became a duly deputized affiliate of the GCPD, while Lois Lane’s ambitions turned from scooping Clark Kent to marrying his caped alter-ego.

Meanwhile, as the ’50s wore on, DC experimented with revitalizing some of their older characters to capture a more modern zeitgeist, starting with the Flash. The new, improved Scarlet Speedster had snazzy new threads, a job as a police scientist (hoo boy did the Silver Age love both police and scientists), and adventures that leaned heavily on the science fiction. Emphasis on the science: though Silver Age Flash comics are loopy as all get-out, Barry Allen’s wacky adventures always pretended to adhere to some sort of scientific principle, buttressed by Barry’s scientific “Flash Facts”: educational tidbits delivered straight to the reader.

It was a hit. Soon DC was updating their characters left and right: Green Lantern! Hawkman! The Atom! More science to appeal to Space Race-era kids; greater respect for law and order to keep from getting spanked by the Comics Code. With horror and crime comics basically out of the game, killed off by the CCA, superhero comics had a clear path back to the top of the industry, and DC, with their wholesome tales of zany space adventure (and with a lengthy lawsuit tying up their biggest superheroic competitor, Fawcett Comics’ Captain Marvel), was leading the pack. 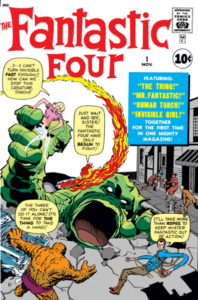 In 1961, Stan Lee and Jack Kirby gave us Fantastic Four #1. On the face of it, this comic wasn’t hugely different than what DC had to offer: four heroes head out into space, are bombarded by nonspecific “cosmic rays,” develop superpowers, and decide to use said powers to aid mankind.

Crucially, though, those heroes didn’t get along. Marvel’s first family squabbled just like a real family. Moreover, superpowers weren’t an unmitigated blessing for all of them; Ben Grimm was trapped in the grotesque rocky body of the Thing, unable to change back. More Marvel heroes followed a similar vein; Stan and Jack next brought us the X-Men, protectors of a world that feared and loathed them, while Stan and Steve Ditko delivered Spider-Man, everyone’s favorite threat and/or menace. While Batman and Robin were millionaire chums, Marvel heroes bickered, worried about money, were misunderstood by the public, and never got the girl. In other words, they were tailor-made for teen audiences.

As DC and Marvel firmly established themselves as the Big Two of comics over the late ’50s and early ’60s, they also established their brands. Both were chock-full of lantern-jawed white dudes having increasingly psychedelic science fiction adventures, but DC, with their happy, legally-sanctioned superheroes, catered to slightly younger readers, while Marvel, with their angsty protagonists and marginally more complex continuity, drew in that emerging category of “teenager.” Of course, then DC tried to get in on that action, and Marvel tried to win it back, and the Big Two became two dogs chasing each other’s tails for all eternity…but that’s a story for another day. 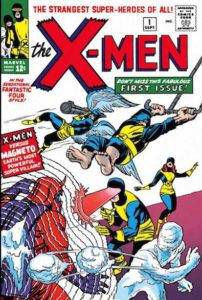 Personally, I have a lot of love for the Silver Age. Farewell to the frenzied, often crude scrabblings of the Golden Age; Silver Age comics are polished, clean, and beautiful, with firmly established rules for how this thing we call comics is supposed to work. They’re hilariously weird, largely thanks to the CCA. Unable to drum up excitement via violence or suspense, comics went oddball instead, and the Silver Age is usually where we get our goofiest tropes, powers (super-ventriloquism!), weaknesses (Green Lantern’s weakness is yellow!), and supervillain shticks (hey there, Stilt-Man). Much of what non-comics readers think of when they think of comics is courtesy of the Silver Age, hence all those biff! bam! pow! headlines, but that’s not the worst thing in the world. I mean, the Silver Age gave us Spider-Man, and he’s done pretty okay for himself.

Looking to dive into some Silver Age comics yourself? If you’re interested in DC, Superman, Flash, and Green Lantern are the highlights. DC doesn’t seem to be putting out any purely Silver Age Superman collections these days, but some of his wackiest adventures came when he was still Superboy, teaming up with the Legion of Super-Heroes. You can choose between a fancy omnibus or convenient paperback with both Flash (omnibus | paperback) and Green Lantern (omnibus | paperback). I’d check out Superman’s Girlfriend, Lois Lane too; yes, there’s a lot of mid-century sexism to be found there, but also a lot of entertaining goofiness from one of the era’s most successful titles.

The above is an incredibly truncated and simplified history of an era of comics whose importance is almost impossible to overstate. For some more non-fiction reading on the subject, check out The Ten-Cent Plague by David Hajdu, Kirby: King of Comics by Mark Evanier, and The Silver Age of DC Comics by Paul Levitz.