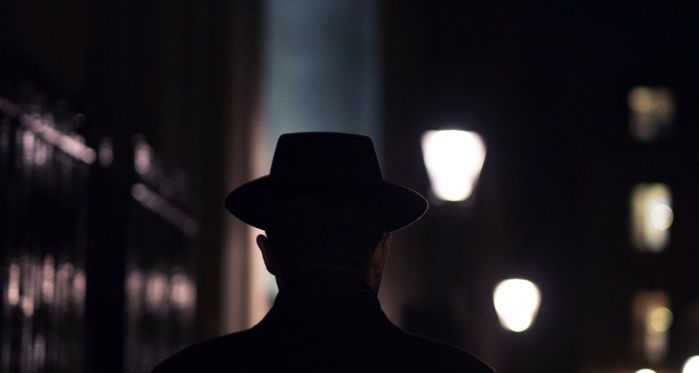 Every November, cinephiles the world over celebrate Noirvember, created by critic Marya E. Gates, by watching and discussing film noir. As I write this, it is still October, and I have yet to decide what to watch this year. As I do every year, I am pondering the noir fiction that came before — and during and after — the time period we acknowledge film noir being made during (approximately 1942 to 1958, with everything after being considered neo-noir). Like film noir, roman noir is often mixed up with hardboiled detective crime fiction, and indeed there is a great deal of crossover. But they aren’t the same.

Film noir is defined largely by its aesthetic, which was directly influenced by the German expressionist films of the 1920s and ‘30s. Stark, “natural” lighting, such as a single lamp casting light across a room or sunlight coming through a window at the side of the frame, filtered through blinds and uncanny shots created with “Dutch” angles, or tilts (the Dutch in question is actually Deutsch, or German, not Dutch as in from Holland/the Netherlands). German expressionism was a response to realism, a refutation of it, and American film noir was a response to the cheery, positive cinema running counter to the Depression and the War.

For amazing examples of the aesthetic of German expressionist film, I highly recommend The Cabinet of Dr. Caligari (1920), Nosferatu (1922), and Metropolis (1927). The style first appeared in American cinema in Phantom of the Opera (1925) and subsequent Universal horror films including Dracula (1931), as well as in the films of Alfred Hitchcock. And while it is likely that American filmmakers would have been influenced by German cinema anyway, it cannot be ignored that many German filmmakers immigrated here when Hitler rose to power.

Roman noir refers to books in the noir genre, many of which also fall into the hardboiled crime sub-genre. Unlike hardboiled fiction, there is no need for roman noir to have a detective main character (although many do). The books tend to be written in first person, with often unreliable narrators. Like film noir, the genre is defined largely by aesthetic, which of course is not as definable in a book. Let’s call it a vibe, shall we?

(Please note, as I discuss several roman noir authors, that I am not attempting to cover every writer in the genre, nor to discuss worldwide titles as I mostly read American noir; I intend merely to hit some highlights.)

The earliest book in the roman noir genre is generally considered to be Red Harvest by Dashiell Hammett, serialized in Black Mask in 1927 and ‘28 and published in book form in 1929. A former Pinkerton operative, Hammett created “the Continental Op,” a man working for the Continental Detective Agency (a fictionalized version of the Pinkerton Detective Agency). The book follows the Op as he investigates murder and corruption during a labor dispute in a mining town. The story straddles the line between hardboiled and noir, and in a way it creates a prototype for both — especially noir, from the detached main character who gets in too deep, to the bleak ending and return to the status quo.

James M. Cain’s first novel, The Postman Always Rings Twice, was published five years later in 1934, offering a non-detective lead and an (arguably) even sexier mess for him to get himself into. Cain’s novels, which largely featured men who are drawn to dangerous women who they’re convinced to ruin their lives for, pushed the definition of noir further from hardboiled, centering the criminals (willingly or otherwise) themselves.

Raymond Chandler burst onto the scene another five years later with The Big Sleep, featuring Detective Philip Marlowe, a former police detective working on his own. Chandler, a former oil company executive, published seven mystery novels that all fall under the noir umbrella, and also wrote the screenplays for some of the most enduring film noir, including Double Indemnity, based on the James Cain novel and co-written with Billy Wilder (during which process they nearly killed each other) and The Blue Dahlia (which deserves an entire essay of its own — suffice to say he refused to finish the script unless provided with alcohol and amanuenses). He also adapted Stranger on a Train for Alfred Hitchcock, from the novel by Patricia Highsmith, who many consider another pioneer of roman noir (although she wrote in many genres).

The early years of roman noir — at least the enduring titles — trended very white and very male, as indeed most of publishing did. However, there were several (white) women writing in the genre, too. In addition to Highsmith, Dorothy B. Hughes and Vera Caspary were big names in the genre in the 1940s, writing the novels In a Lonely Place and Laura, respectively, both of which were adapted into film noir. On the film side, science fiction author Leigh Brackett, now perhaps best remembered for writing the first draft of The Empire Strikes Back, adapted several roman noirs for the screen, including The Big Sleep and The Long Goodbye, both from books by Chandler.

Skimming past the neo-noir period, with nihilistic fiction from Jim Thompson and James Ellroy, I find modern publishing to be somewhat more diverse in its noir offerings. Walter Mosley’s Devil in a Blue Dress, another title that straddles hardboiled and noir, was published in 1990. Megan Abbott’s Queenpin, which turns the gender politics of noir on their head, was published in 2007. Dead Things, the first in Stephen Blackmoore’s Eric Carter series of paranormal noir, was published in 2013. And even more recently, Alex Segura’s Secret Identity, a noir set in the 1970s comic book world, and Kellye Garrett’s Like a Sister both came out in early 2022.

Want more noir? Check out our guide to southern noir, a primer on sunshine noir, and this list of Nordic noir.