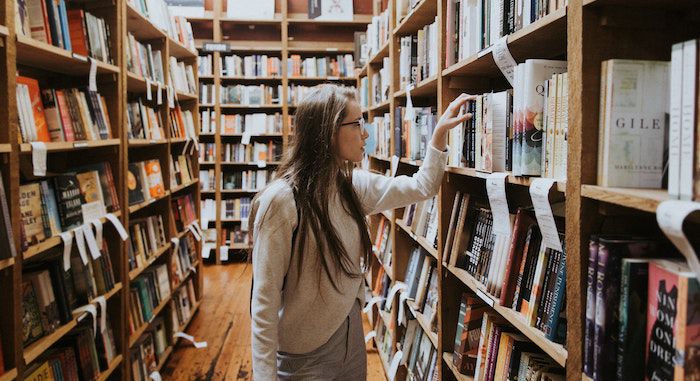 Growing up in America as an Indian American is a strange experience. Yes, we have privileges that other marginalized communities do not enjoy. That said, we are constantly exoticized and othered while being labeled as the “model minority.” In other words, we are a tolerable “other” who do not seemingly begrudge the caste in power for their self-proclaimed superior status.

I say this because it’s rare indeed when the publishing industry decides to release stories about us. When they do, it’s always about our otherness, the fact that we fit a mold that we didn’t ask for, or that we immigrated from a strange, exotic land and brought our strange, exotic ways.

I grew up seeing my peers value the stories and trials of white characters but completely overlook Indian characters (and really any Asians for the matter). They’d be in awe of Elizabeth Bennett but not realize that the privilege and comfort of her England was built on the backs of Africans and South Asians. This was always my connection to stories: a colonial India that only existed for white pleasure and ridicule. I remember cringing at the tacky jokes about stinky curries, funny accents, strange names, and overachievers. As if our only place in American literature was fulfilling a useless quota and reinforcing prescribed stereotypes.

Although Indians have been in the America in small numbers since the 17th century thanks to the East India Trading Company, it wasn’t until the late 20th century when we began immigrating in significant numbers. We honestly have more history with our friends from across the pond than in the Land of the Free.

Due to our recent prominence in America and status as a high-earning, college-educated populace (side note: the wealth gap between Asian Americans is important to consider), Indian stories are only now being entered into the literary canon.

I speculate that part of this is also that second generation folks such as myself have developed a unique Indian American identity. Our roots are still in the Old World but were nurtured in the New World. We’re still carving out a space for ourselves here.

What It Means to be Indian American

Before I dive in any more, I want to be clear that “Indian” is a general term for a diverse group of people who have their own traditions, languages, religions, foods, and beliefs. Even terms such as “North Indian” and “South Indian” are general.

Most Indians are fine using the term “Indian” to identify themselves. However, our lived experiences at home are usually more specific. For example, my family hails from Gujarat (Gandhi’s home state). As such, I grew up hearing my parents and grandmother speaking Gujarati and eating Gujarati food. The chicken tikka masala from Indian restaurants was, frankly, foreign to me.

On top of our ethnic identities, we also have nuances in our religions. There are religions that were founded on the subcontinent (i.e., Hinduism, Buddhism, Sikhism, and Jainism) as well as Abrahamic faiths (i.e., Christianity, Judaism, and Islam) that made their way to India via cultural exchange, immigration, and colonialism. There is also a vibrant community of Parsis who practice the ancient religion of Zoroastrianism that originated in Persia.

And don’t get me started about caste.

The Shadow of Jhumpa Lahiri and Immigrant Fiction

The first and most obvious Indian American writer I can think of is none other than Jhumpa Lahiri. Although she’s from Bengal and I’m from Gujarat, her stories about immigrant families finally made me feel seen. It was the first time that Indian experiences in America were given proper respect and study.

Lahiri’s beautiful prose and complex characters were the first time I 1) saw an Indian succeeding in literature and 2) read about Indians who didn’t fit into a mold but were (gasp) complex human beings with (oh my) normal people problems.

My favorite book of hers has to be The Lowland. I found the depiction of brotherhood, motherhood, and statehood to be fascinating. Although some characters fit into the model minority mold, their rich internal dialogue and personal struggles added a nuance that I hadn’t seen up to that point.

This is a question that I struggle with. Most of us grew up as the children of immigrants or are immigrants ourselves. For once, time is on our side and now there are third generation Indian Americans with new stories to tell who are disconnected from the immigrant experience.

That said, Lahiri doesn’t consider herself to be a writer of “immigrant fiction.” In an interview with The New York Times, she said: “I don’t know what to make of the term ‘immigrant fiction.’ Writers have always tended to write about the worlds they come from. And it just so happens that many writers originate from different parts of the world than the ones they end up living in, either by choice or by necessity or by circumstance, and therefore, write about those experiences. If certain books are to be termed immigrant fiction, what do we call the rest? Native fiction? Puritan fiction? This distinction doesn’t agree with me. Given the history of the United States, all American fiction could be classified as immigrant fiction.”

In all honesty, I struggle with Lahiri’s take on immigrant fiction. She’s right in that if we classify all Indian American literature as immigrant fiction, then by default we are just “others” imposing on America. Not actual Americans (story of my life).

To be fair, we shouldn’t need to base Indian American literature off of one writer who herself doesn’t want the title. But publishing had different ideas, and thanks to a drought of Indian writers thanks to the “Indian quota” that Lahiri filled, we honestly didn’t get many Indian American writers until recently. As such, Lahiri became the unwilling face of Indian American literature. In fact, Sanjena Sathian, the author of the recently released Gold Diggers, notes that “The shadow of Lahirism continues to loom large over young writers.”

Let’s get back to the model minority myth.

Unfortunately, there’s an understanding in the Indian community that we don’t air our dirty laundry in front of others. We retain our good impression and status no matter what. Unfortunately, this makes writing an honest novel rather impossible. I’ve written before on why it’s important for Indian American literature to show us failing. Following a stereotype is not what pushes the envelope on literature; instead, we have to take risks.

But it’s not my place to tell Indian American authors what to write about. That wouldn’t be any fun. I’m simply looking for complex characters who are just themselves. To me, the cornerstone of a great Indian American novel isn’t that it challenges the model minority myth or basic stereotypes.

As a selfish person, it’s all about complex characters who are nothing but themselves and don’t exist to challenge anything but themselves. And as I mentioned before, this means they’ll probably fail at some point and then get up and give it another try.

Here’s the cool thing about Indian American literature: it’s still so new that it can be whatever it wants to be. If addressing the model minority myth and the immigrant experience is important to writers, then those will be cornerstones. If for some reason they want to write about aliens or dragons (which would be amazing), then those will be cornerstones.

I don’t want representation for the sake of representation anymore. Indian American literature isn’t here to make anyone comfortable. It’s here to represent our experiences, hopes, and dreams rather than to fulfill a diversity requirement.

Recent stories that I’ve loved include the aforementioned Gold Diggers by Sanjena Sathian, A Life of Adventure and Delight by Akhil Sharma, and Well-Behaved Indian Women by Saumya Dave. All three stories show Indians failing and dreaming outside the norms of white America and even Indian America. All three do mention the immigrant experience. However, all three show very different stories with nuance and aplomb.

I imagine that my ideas will be quickly outdated thanks to how many Indian American writers are finally getting their stories published. There is still so much to address in our community such as religion, racism, misogyny, arranged marriage, casteism, and multigenerational living.