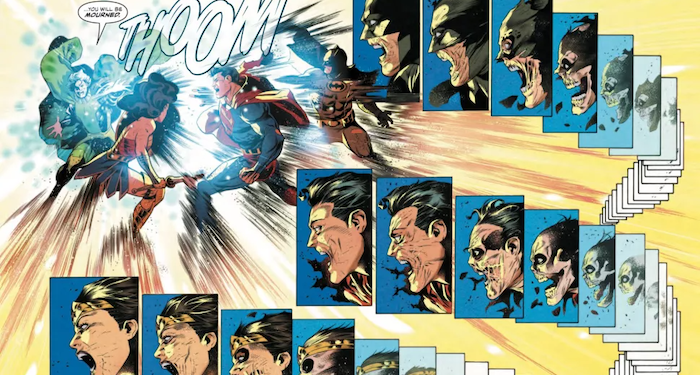 Crisis. The word sends shivers down the spines of every DC Comics reader. Beginning with Crisis on Infinite Earths in 1985, these epic crossover events have become a cornerstone of DC Comics. We’re in the middle of another such crossover event in DC Comics: Dark Crisis. So, what is DC’s Dark Crisis?

In that original crisis by Marv Wolfman and George Perez, the Anti-Monitor (powerful cosmic being) is going around and destroying universes. The Monitor (yep, another powerful cosmic being) is recruiting heroes to fight Anti-Monitor. Lots of heroes and villains banded together to fight off an enormous, existential threat from a character rarely seen before. Some heroes died. Continuity was simplified.

This has mostly been the theme upon which other crises in DC have been variations. Infinite Crisis and Final Crisis were different stories, sure, but the idea is generally the same. Bring in a big, cosmic threat to change up the status quo, reboot continuity in some way, include a major character death, and give a fresh start for DC Comics going forward. They often involve multiple universes, epic villain monologues, and reality-shattering battles.

Then there was 2004’s Identity Crisis. Sue Dibny, Elongated Man’s wife, is murdered, with Doctor Light as the primary suspect. Eventually, it comes to light that Doctor Light once did unspeakable acts to Sue, and the Justice League forcibly “rehabilitated” Doctor Light by wiping his mind and reducing him from a major player to a C-list villain. This seven-issue story was personal, much smaller than other crises, but asked intimate and philosophical questions of our heroes.

The Justice League is dead. Batman, Superman, Wonder Woman, Martian Manhunter, Aquaman, Black Canary, Green Arrow, John Stewart, Zatanna, Hawkgirl, and Black Adam were suddenly transported to another universe. There, they ran into Pariah, one of the major villains of Crisis on Infinite Earths. After seemingly defeating his plan by destroying a machine, Pariah turned newfound powers against our heroes, vaporizing them all. Only Black Adam survived, thrown back to the prime universe to warn others of the coming of Pariah.

Sounds like a big, cosmic threat coming to rearrange the multiverse, right? Yep. And this time around, there’s no Justice League to meet the threat.

But that’s where Dark Crisis gets interesting. A horrifying threat is on the horizon, yes, but this is also a story of the next generation of superheroes trying to band together while also mourning their mentors and even parents. Jonathan Kent pulls together a rag-tag new version of the Justice League. The heroes of the original Young Justice are trying to patch up old relationships and navigate a world without their own heroes at the same time. Deathstroke wants to kill all the heroes, starting with the Teen Titans, and they don’t have a Justice League to call for backup.

Perhaps more than Pariah or Deathstroke, the major villains of Dark Crisis appear to be self-doubt, hero worship, and grief. Jonathan Kent is wearing the big, red S, but he doesn’t really think he’s ready to step into his father’s shoes. Dick Grayson, Tim Drake, and Damian Wayne are all mourning the loss of their collective Bat-Dad in their own ways, and none of those ways appear healthy so far. Wonder Girl, AKA Cassie Sandsmark, feels like she and the rest of her generation of heroes are alone in their grief, unable to connect to each other, let alone form a team.

What is DC’s Dark Crisis? Pariah is coming, intent on destroying all universes, and with enough raw power to vaporize even the most towering heroes. This crisis is huge and existential. It’s also deeply personal and character driven as the newer generation of heroes have to find their places in the world. It will be up to them to level up, rise up, and fill the shoes of those who came before. And who knows, maybe they’ll even be able to bring back those great heroes in the process.