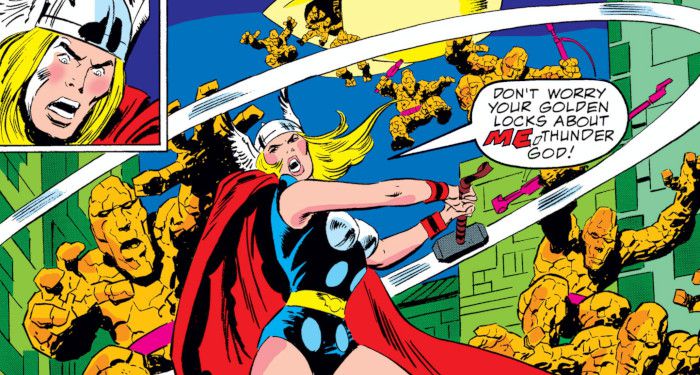 Marvel Comics’s What If…? began decades ago as a fun way for creators to tell strange, unlikely stories without affecting the canonical Marvel Universe. What if Hulk killed Wolverine? What if Wolverine killed Hulk? Killing either superhero has large implications on the Marvel Universe, so What If…? is a way to let that play out, to explore the idea and allow the larger comics universe to continue on unaffected.

What If…? was also a useful tool for test driving ideas. Before Jane Foster took up Mjolnir and became Thor in Jason Aaron’s run of Thor, she held the hammer What If…? #10 in 1978. Hulk actually ripped Wolverine in half in the Ultimate Universe, even if it didn’t kill the little berserker. The noncanonical comic asked what if Gwen Stacey survived, Jessica Jones joined the Avengers, or what if someone other than Peter Parker became Spider-Man? All of these have come to pass in the Marvel Universe in the years since these little one-off stories.

Recently, an issue asked “what if Miles Morales became Wolverine?” It was a really fun story. Genetically engineered spider powers, mutant healing, and adamantium claws make for an incredible combination. In literally the same month, however, an issue of Spider-Gwen: Gwen Verse introduced a universe in which Gwen Stacy is Thor. Thorgwen. And Captain America: Cap-Gwen. And Wolverine: Gwen Howlett. You get the idea.

All of this makes me wonder, what is the point of What If…? in Marvel Comics when the multiverse is so prevalent? Why is Gwen Stacy as Thor canon when Miles Morales as Wolverine isn’t? The answer to this question became apparent when I considered how the nature of ongoing comics is for writers to find new ways to tell stories. When there are decades of stories and canon behind you, it takes real creativity and paradigm shifting to find those new stories. That’s what What If…? has always been about: a way to tell new stories.

All of this is further complicated by how the Marvel Cinematic Universe (MCU) has treated What If…? Those of us who read the comics were expecting a string of disconnected, noncanonical stories that reimagined the MCU characters. While it started that way, the big twist was revealing that all of these disconnected stories were, in fact, canonical alternate universes that connected and came together at the end. Some even made appearances in Doctor Strange and the Multiverse of Madness.

To be clear, I love this twist. The creative minds driving the MCU know how to play with long-time readers’ expectations. We never expected the episodes to connect or be canon. When The Illuminati was teased in the Multiverse of Madness trailer, we automatically had expectations of who would sit in those chairs, which the movie played with and against. They’ve done it again and again, and it’s a nice way to surprise audiences.

The main Marvel Universe is a different bag of magical hammers. The canon matters. It is our basis of knowledge for who these characters are and the history they have with each other. Is the main Marvel Universe heading in the same direction as the MCU? Is it no longer safe to assume that issues of What If…? are noncanonical? As a comic book fan, I need to understand what is and is not canon. Long-running superhero books can be convoluted and confusing enough, and this just makes it more challenging.

If Marvel wants to lean hard into the multiverse like it is with the MCU, then just do it. Don’t pull the canonical rug out from under readers with the What If…? title. If Cosmic Ghost Rider — Frank Castle dies, becomes Ghost Rider, goes bananas, and is then given The Power Cosmic — can be canon, then there’s nothing too outlandish for the Marvel Universe canon.

Besides, I want to see Miles Morales as Wolverine fight Kamala Khan as Hulk.