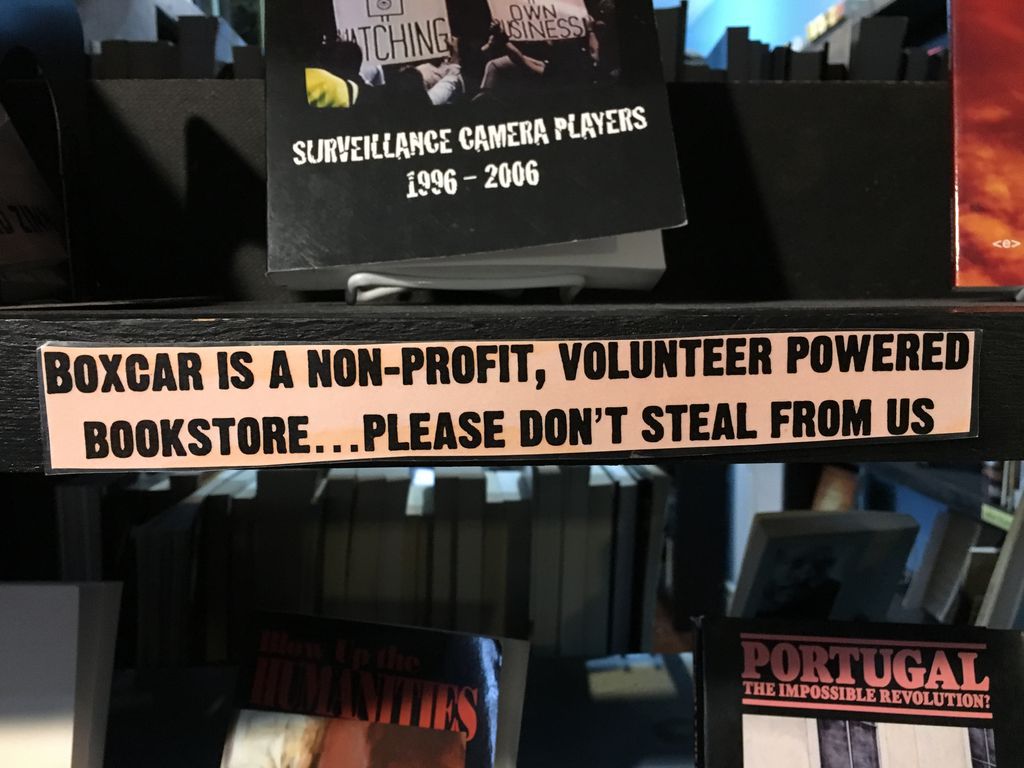 Every month or so I check the Wikipedia page for LGBT bookstores to update the “closed” section, a list that has started to reach an upsetting length. Occasionally certain entries have been deleted from the page entirely, likely the result of a far-right edit-a-thons or careless moderators. While the erasure of LGBTQ+ history online is upsetting enough, the dissolution of brick and mortar bookstores, the physical spaces that hold Queer history, is heartbreaking. There are many online spaces for far left, LGBT, BME, anarchist, and other groups to collect themselves and organize. However, the physical space where most of these collectives are often radical booksellers, whose numbers seem to be dwindling. Beyond the sad image of a a “Closing Down! All Sales Final!” banner on the door, the aftershock of losing these kinds of spaces often cuts deeper into the communities they worked to preserve and protect.

A recent casualty was Boxcar Books in Bloomington, Indiana, which closed in January. Stephanie, the volunteer who was there while my friends and I frantically bought up zines and prison publications, gave a warm response despite the crates labeled “GOODWILL???” she was packing. Bloomington’s zine community, a network dependent on these bookshops, would survive through the music and independent press scene. Yet the lack of a comfortable (and legitimizing) setting of a bookstore will likely close off the medium to first time readers. The centralization of Boxcar as a meeting space was another cost; political groups, POC book clubs, and therapy support meetings were the first to be relocated, but Stephanie as wearily acknowledged, “not a lot of venues are happy to host some of us, and we are not excited about using a church for some of our meetings. People have started to offer their homes, though, so it’s looking okay for now.” Boxcar’s staff dwindled rapidly after that weekend they have been unable to reach out since January.

The services these places offer will change based on whatever people need it for, and more often than not these groups just need safety.

Boxcar was a perfect example of how radical bookshops tend to go far beyond the role of a traditional booksellers, offering services and shelter that are either neglected by public officials or are too specific to legislate their positive impact. Housmans, London’s most famous radical bookseller, has exerted charitable practices since their inception. A recent visit to their King’s Cross location was punctuated by Pro-EU book club and political meeting, Housmans being one of the few venues to house an event without a fee. Some services are as simple as just a warm building with free coffee for the homeless. Other times it’s a makeshift medical centre for protesters who were harmed or maced but can’t risk going to a hospital for fear of arrest. The services these places offer will change based on whatever people need, and more often than not these groups just need safety. 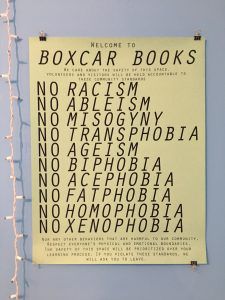 Those are just the physical services. Mairi Oliver, owner of Lighthouse Radical Books in Edinburgh, explained radical bookshops on more empathetic and political terms: “we see individual readers light up every day simply from the experience of being ‘seen’—a white, middle class, cis male will feel deliberately included virtually anywhere; remove any one of those descriptors and the places aimed explicitly at you decreases; remove them all and you’re virtually unseen.”

Mairi might be radical bookshops’ greatest cheerleader. She organized Edinburgh’s Radical Book Fair the previous year and works with similar spaces across the UK to bring events, speakers, and roundtables to several independent booksellers, essentially creating a network of feminist, LGBTQ+, POC, anarchist, and communist bookshops united by an identity of survivorship.

Spaces that serve LGBT, Left-leaning, Anarchist, and BME groups are the ones bearing the cost of the a shifting industry.

Her momentum in the British radical booksellers scene didn’t come without personal risk, either. Lighthouse was born out of the closing of Word Power Radical Press, a bookstore with heavy socialist and feminist stock that was a staple of the Edinburgh booksellers group for decades. “When I heard Word Power was closing in [January] 2017, I felt so physically winded I had to go home from work and I wept for hours, I was in shock. This was just after the Trump inauguration, Brexit & [Theresa] May loomed large, it seemed catastrophic. In the end the idea of a world without it was so wrong I put in my life savings and a whole load of debt to keep it alive; best decision I ever made, and one many come in to express their gratitude for.”

Mairi’s words echoed a sentiment that was spoken by Phillip Rashoon after Atlanta’s Outwrite closed in 2011. Both bookshop owners understood that these stores are resources to communities that are constantly under threat. Their closures would essentially mean the deprivation of a resource for those communities. 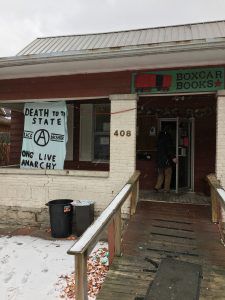 It’s an easy to treat the closure of the bookshops as a symptom of new publishing industry channels and standards. Yet this doesn’t hold up to closer scrutiny. Radical bookshops’ role in the publishing ecosystem is as champions of smaller, independent press. They are systemically able to hold publishers to account when they fail to deliver diverse lists. They can also mobilize politically when a publisher is under threat. At the same time, independent bookstores are on the rise, while the chief competitor’s brick and mortar space was dismissed as “a bookstore for people who don’t read“ and currently struggle to validate their existence. Buy Local campaigns are also beginning to gain momentum. Yet the spaces that serve LGBT, Left-leaning, Anarchist, and BME groups are the ones bearing the cost of the a shifting industry. Radical bookshops are continually threatened by the systems they criticize.

Names on a Wikipedia page, or an abandoned storefront are easy to visualize. The difficult part is accounting for what’s missing: a bookclub, a meeting space, a publishing house, shelter. The closure of a space could mean the death of a community.