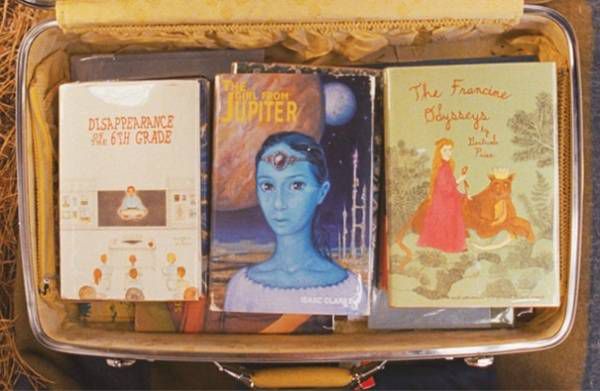 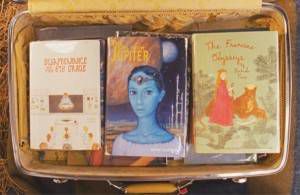 Wes Anderson’s quirky new film about young (naïve?) love includes some choice nuggets for book lovers. The “heroine” of the story, 12-year-old Suzy, runs away from home (this isn’t spoiling anything — it happens early in the film) and brings with her six stolen library books neatly packed in suitcase. She likes “adventure stories,” especially with female protagonists, she explains.

The interesting thing here is that the books she brings are invented — Wes Anderson commissioned six artists to create covers for the six novels. They have wonderfully realistic titles — like Shelly and the Secret Universe and The Francine Odysseys — evocative of the real books we all loved as kids. And Anderson himself wrote the snippets Suzy reads to her beau Sam throughout the film. At first Sam is sort of bored by the stories, but soon he becomes as entranced by them as she is.

But what’s even cooler than the invented stories within the film is that Anderson also commissioned six animated shorts to illustrate the six books in the film. You can see them here. Highly recommended viewing, if you’ve seen and loved the film. (And if you haven’t, you should. It’s excellent.)

Here at Book Riot, we’ve done posts about the best books about books, the best movies about writing (and, here are three more from a different post), and even a compilation of the best fictional books in fiction. But Flavorwire beat us to the punch on this one with their list of top 10 fictional books from film.

Still, there have to be more than just those 10, right? Help us out, Riot readers. What are your favorite fictional books in movies?

(My personal favorite is Swedish-Made Penis Enlarger Pumps and Me: (This Sort of Thing Is My Bag, Baby) from Austin Powers.)