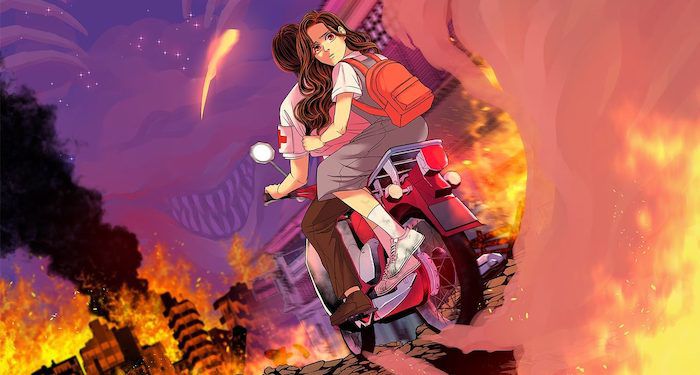 Buckle up friends, because I’m here to tell you a tale. Long ago, in a time before TikTok and BeReal, some written stories were told serially. New chapters would be published in a newspaper or magazine weekly, and readers were left to gnaw on their nails and wonder what would happen next in the meantime. (Psst: you can still sign up for serialized substacks of classic literature today!) There was also a time when it was normal to look for new comics in the “Sunday Funnies.” It was a wild time when cliffhangers were a common occurrence.

Now, while it is not often these days that stories are printed in this fashion, a new storytelling style has emerged in the digital realm. I am here to tell you about today’s equivalent: Webtoon.

My first dip into the Webtoon waters involved reading about a Greek goddess with bright pink skin and the power to create blossoms. She meets a blue Greek god with the power to rule the underworld, and suddenly all hell breaks loose (no pun intended). Rachel Smythe’s Lore Olympus caught my eye — and my heart — for a multitude of reasons. From the vibrant characters, to the stunning illustrations, to the weekly updates, I could not look away. I did not grow up reading many graphic novels, so it was a delight to discover a new way to read young adult stories.

Whether you’re an avid Webtoon reader or you are simply wondering what on Earth has people so captivated, let’s explore it all.

What is a Webtoon?

Webtoons are free, accessible, illustrated stories shared online. Ji Hyeon Yun on Medium explains that it all began at the turn of the century: “It started with Chollian, a now-defunct Internet service engine, that established Chollian Webtoon to provide webtoons to readers in August of 2000. What made it different from other online comics was its introduction of the vertical-layout,” meaning readers can scroll downwards as adventures unfold on their computer, tablet, or phone screens.

The Webtoon site specifically entered the scene a bit later in Korea in 2004. The webcomics site — developed by Naver Corporation — was Webtoon founder JunKoo Kim’s hope to reignite an interest in comics. A lack of public interest was due to a severe dip in comics publishing and the strong idea prevalent in the 1990s that comics needed to be censored by the Korean government.

“Kim wanted to initially reach teens by focusing on content he described as ‘casual, light, and cool,’” writes Kirsten Acuna in Business Insider. “He thought it wouldn’t make sense to just appeal to traditional comic fans who already had ‘a defined taste of what they like.’ Kim came up with launching scroll comics online, an idea which came about because of an astute observation about human behavior.”

And Kim’s idea has taken off. Nearly 20 years later, statistics site Similar Web records that Webtoon received over 52.9 million monthly visits in July 2022 alone. Many webcomics have made their ways into the hands of publishers and then onto bookshelves.

What are YA Webtoons and Why are They Important?

Along with accessibility, Webtoons has also become a space where frequently unheard voices are given the mic. Alice Oseman, author of the popular Heartstopper series, believes that webcomics can contribute to key improvements in traditional publishing.

“In the online world of webcomics,” writes Oseman in an article for Goodreads, “stories of all genres with marginalized leads, often created by marginalized authors and artists, find the space to shine, and it’s so important for teenagers in particular to see and read these stories.”

The genre is so popular, in fact, that beloved YA books that were written in the traditional, unillustrated fashion are now being turned into webcomics, such as Rot and Ruin by Jonathan Maberry and The Weight of Our Sky by Hanna Alkaf.

What Are Popular YA Webtoons Worth Reading?

So where to get started? What should you read? If you’re looking for a gentle, sweet introduction to YA webtoons, I recommend checking out Oseman’s Heartstopper series. Follow Charlie, a self-professed nerd, and Nick, a rugby lad, as they find love in a British school.

If you’re into romance, fantasy, and classic literature retellings, you may enjoy The Wrath & The Dawn by Renée Ahdieh and Silvester Vitale. (You might know this title since it was originally published as a YA book in 2015.) Shahrzad is a teen girl who volunteers herself to marry a seemingly bloodthirsty king. Her goal? To be the one queen — in a string of many — to survive beyond her wedding night. This is a retelling of One Thousand and One Nights.

I’d be remiss in not also reminding you to read the webcomic of all webcomics: Lore Olympus! Meet Persephone, Hades, Hera, Apollo, and a whole cast of reimagined Greek gods. There’s love, hate, drama, and very cute pet dogs.

Looking for more Webtoons to read? Check out 9 slice-of-life webcomics you can read right now.