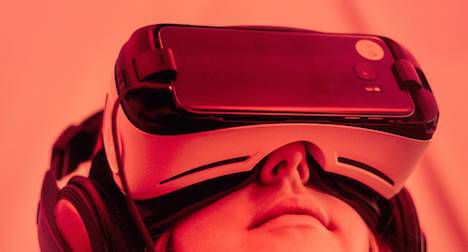 From VR games that immerse you in the Harry Potter world to interactive tools for writers, books and VR could become a deeply creative space for readers over the next few years.

Of course, Harry Potter would lead the charge in immersive VR game tie-ins, because every reader wants to be in that world. A short 30-minute (tops) Fantastic Beasts game allows you to cast some spells and tinker around in the Potter universe.

Another game designer, 1RIC, is also working on a augmented reality game where you can interact with objects in your space in a Potter-style experience. (Of course, super still in development, but an interesting AR application of a book tie-in.)

Likewise, a newer indie game promises to offer a comic book-style VR adaptation of the ongoing feud between Sherlock and Moriarty in Moriarty: Endgame VR.

In recent news, George Saunders’ Lincoln in the Bardo got a ten-minute VR adaptation that was funded by the New York Times. The experience allows you to interact with ghosts from the novel. You can watch the short film here.

Finally, War of Words VR showcases “The Kiss,” a poem by Siegfried Sassoon about the first World War along with immersive details. These types of experiences could be hugely beneficial in classrooms.

Beyond straight adaptations, some also claim merit in using VR as an interface to read books, just it’s being used for meditation and workspaces. Chimera Reader promises complete immersion and a swanky ass library of your choosing to read your favorite books. It’s a cool idea, with applications especially for studying or really focused reading time.

Of course, the major downside of VR is having something on your face so eh, I’m not sure of the long-term enjoyment of this approach. Especially when reading a book does not require something on said face.

While all of these applications are interesting, right now they’re underdeveloped and mostly in theoretical stages. Where books and VR are really going to get fascinating, though, is in VR games that tap directly into older story-telling traditions. We’ve talked a bit about the best video games for readers before, and VR expands on that. Like, a lot.

For classic whodunit storytelling with puzzles and adventure, The Gallery is one the best VR games you can find. Inspired by 80s fantasy film, The Gallery pulls you completely into a mystery involving a missing sister, a crazy madhat professor, and hints of other monsters. It’s like finding your way through a mystery novel, but you’re playing the main character as you go.

Vanishing Realms is the classic fantasy dungeon crawler you’ve always wanted, with sorcery and swords. And you get to fight big-ass skeletons, so all around win.

Chair In A Room is classic horror adventure set in the Deep South and no I’m not h*cking playing that shit. But, from what people say, it’s a deeply atmospheric chilling narrative that relies on psychological terror rather than jump scares.

Finally, players are going to get some interesting games and book tie-ins, but some of the greatest potential for books and VR is in the writing process itself.

As an author, imagine being able to sketch out your book with life-size maps or character builds and then walking around in those. Tilt Brush allows you to do just that.

Likewise, VR could allow writers to research their stories without leaving their living room. Writing a novel with a scene in Rome? Google Earth VR lets you go there.

Trying to get some perspective on the human body for a crime thriller? You’ve got 3D Organon VR Anatomy. Writing a sci-fi? Check out the scope of the solar system.

Books and VR offer huge opportunities for immersing ourselves in our favorite books, for playing deeply literary games, and as tools for creators. But, as you’ll notice, the word “promise” shows up more than once in this post. Simply put, many of these initial experiences and games are short. What’s possible with VR is still being tested and developed. Which makes sense with the amount of development and time that’s required by this medium.

There’s a lot of promise here, both for readers and writers. With newer, more accessible technologies that allow a lower entry point both for developers and users, books and VR could become a deeply symbiotic and fascinating world to explore in the next few years. To actually read some books about VR, I recommend checking out this list from BrioVR.

What are your thoughts on books and VR?