I assumed it was easy money and easy work. I guessed each story would be full of clichéd writing, and imagination would be left in a heap on the floor along with expensive, but generic, lingerie. I heard the voice of my first college creative writing teacher echoing, “Sex scenes are like car manuals; it’s all about what part goes where.”

But this was not the truth.

Since I first met Rachel on that summer afternoon in 2016, she’s not only taught me as much about good writing and the writer’s life as the writers I have known who have been to Yaddo, but she also showed me that erotica could be a democratic space that celebrates the diversity of desire. 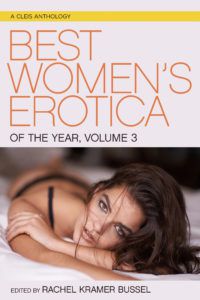 Rachel Kramer Bussel is currently the editor of the Best Women’s Erotica of the Year anthologies from Cleis Press, but she also curates, edits, writes, and promotes several other books each year. Her first story was published in 2000, and she has been working as an editor since 2006. In that time she has either edited, appeared in, or done both in over 100 anthologies. She is also a former editor for Penthouse, and has written more than just good smut—she’s been published in The New York Times, O, The Oprah Magazine, Harper’s Bazaar, and many others.

Rachel taught me that as writers, we must find a balance between art and the hustle. Writing erotica, like writing a poem or a short story or an essay, takes revision, voice, tone, and complexity. To make it interesting, it also has to find a new way of looking at the act, going beyond the male gaze or the conventional ending we all expect.

We must create, we must keep working, but we also must then work to get our creation out there for the world to see. As a working writer and editor, Rachel has this impressive way of both finding the quiet space to write and edit, yet she also dedicates time to promotion. She hosts readings, runs give aways, and creates a wide variety of outreach both digital and traditional.

Part of the promotion is the power of community. The more time I spent with Rachel, the more I understood her dedication to the writers she works with. She constantly promotes not just her work, but the work of others. It didn’t matter whether it was the author’s first story or if it was a heavyweight in the business, Rachel went out of her way to promote them.

And it was the writers and stories that Rachel found that changed my mind about erotica. As I read more, I discovered that erotica is a space that explores diversity and desire not only on the page but in the people who write each story.

Erotica also exposes the truth that desire is a thing that can span, race, class, ability, and health status. Because of Rachel Kramer Bussel, stories with deaf narrators and cancer survivors found their way onto my bookshelf. I read about a Filipino virgin on her birthday and an African American fangirl who met and then had sex with a movie star she had had a crush on 20 years before.

The writers of these romantic short stories are also diverse. At a reading for one of the anthologies, I met an author who plays the French horn and we chatted about Michael de Montaigne. Another is a professional photographer with an Instagram account of people on motorcycles around Manhattan. A third author came from Alaska, drove an RV, and was grateful for a husband who watched her dogs while she read her piece.

Through Rachel Kramer Bussel and the authors in her anthologies, I learned not only that sex is part of the human experience, but it is something that can be embraced no matter who you are or what you like. In erotica, we are given the keys to safely explore the unknown and the familiar, all the while discovering more about who we are.

Best Women’s Erotica of the Year and other anthologies gave me a permission slip I had previously been denied. It gave me permission to like what I like, no matter my shape or size or income or orientation. In the end, I have discovered that even if what I like is conventional, that doesn’t mean I can’t be sexy, sex-positive, or even a little assertive in my own desire.