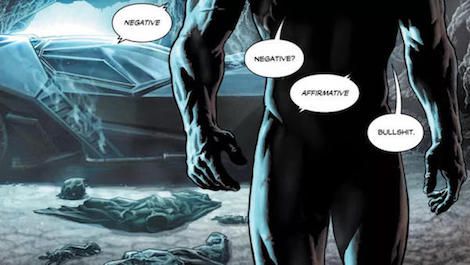 By now, you’ve probably heard at least a little giggling about DC’s latest PR kerfuffle. Mainstream publications like the Guardian have picked up the story, and both Seth Meyers and Stephen Colbert have joked about it (although to be fair, they’re both huge nerds). Even freaking TMZ is covering the “scandal” like it’s a reality TV star or third string boybander’s…uh, batarang and not a fictional character’s.

So what exactly happened? Well, on Wednesday, September 19th (incidentally, Yom Kippur—someone’s doing some atonement for this one!), DC published the first new issue in their new Black Label imprint: Batman: Damned #1, by Brian Azzarello and Lee Bermejo. At one point in the issue, Bruce returns to the Batcave and strips out of his costume. All the way out of his costume. The original printing (and digital release) of the book showed Bruce from armpit to mid-thigh, with his penis clearly—albeit tastefully—visible.

Mostly, people were laughing—I haven’t seen outrage anywhere, although I’m sure it exists—but DC swiftly censored the digital version, replacing Bruce’s groinal region with an inky black void (to match his sadness, probably), and announced that future printings will be similarly blacked out. First run copies are, naturally, flying off the shelves. 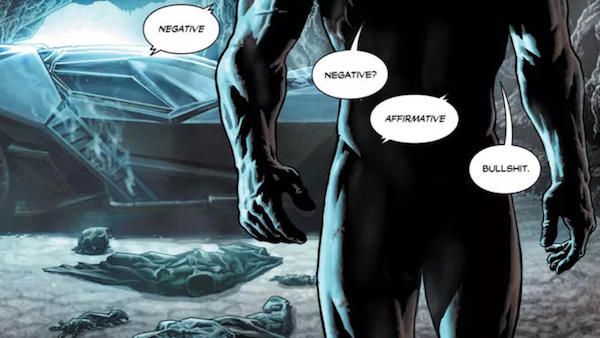 Batman, being a little less Brave and Bold than previously.

Now, I have no strong feelings about seeing Batman’s batarang one way or the other. (Personally, I find it more offensive that the comic costs $7, which strikes me as a steep price for a single issue, even if the thing is 53 pages and one of those pages is vigilante vampire erotica.) I assumed he had one. It was in this comic. I cracked jokes, because I’m a human being. Whatever.

I highly suspect all of this was choreographed, because wow did DC move fast on it. And what better way to get everyone talking about your new “mature readers” imprint and ensure that the first printing sells out? It’s an unconventional approach to marketing, sure, but if it was deliberate, someone at DC is getting a raise right about now.

But there is one aspect of this story that bugs me, because of course it does, because I’m professionally Grumpy About Comics.

Again, Damned is the first new book from DC’s Black Label. (Select backlist titles, such as Batman: White Knight, Frank Miller’s Ronin, and, somewhat bafflingly, the relatively kid-friendly All-Star Superman and DC: The New Frontier are being reprinted under the label as well.) DC describes Black Label as their “home for classy, collectible superhero stories aimed at mature readers looking to be challenged and surprised as they’re entertained, with an eye for the unique and remarkable.” (And yes, in the context of Batman’s Bat-bits, that is hilarious phrasing.) Publisher Jim Lee also described the line as “edgy and provocative.”

Nothing about the scene is prurient. Some readers who got their hands on a first printing actually missed the nudity, because it was cast so deeply in shadow. It’s simply a drawing of a nude form, in a book for adults. You can see more explicit and better-lit nudity at any art museum in the world. And it’s hardly the first visible penis in a DC comics; as many have pointed out, Dr. Manhattan is plenty naked in Watchmen, and I distinctly remember some tasteful déshabillé from Oliver Queen in Mike Grell’s Green Arrow.

So why did DC remove it? According to a statement they gave CBR, “it was decided Bruce Wayne’s nudity was not additive to the story.”

First off, after the book arrives in stores is a hell of a time to decide that.

What about that is “additive to the story?”

What’s additive about Supergirl spending nearly a decade in a crop top and barely-there mini that constantly flirted with upskirts, or her father deciding to send her to Earth naked? What’s additive about the scene in All-Star Batman and Robin where Vicki Vale exposits to the reader about Bruce Wayne while frolicking around in her underwear (complete with the infamous Miller-written directive from the script: “Okay, I’m shameless, let’s go for the ASS SHOT”)? What’s additive about Harley Quinn’s bustier and hot pants, Mera’s plunging neckline, Power Girl’s boob window?

When I think of comic book companies trying to appeal to “mature readers,” I think of all the comics I’ve read with graphic violence, F-bombs (or euphemistic, Beetle Bailey-style wingdings) scattered liberally about the page, and sexual assault. I think of former DC editor Valerie D’Orazio’s account of the germination of and creative process behind Identity Crisis, a comic that centered around the violent rape and murder of a beloved Silver Age character. The associate editor running in shouting “The rape pages are in!” The salaciousness, palpable even to a new reader with no connection to the industry. The decade of masturbatory violence that followed across DC’s entire line. Tilting a Teen Titans comic away from the kid sitting next to me on the subway so that he wouldn’t see the Wendy and Marvin being graphically mauled by a giant dog. The fact that Identity Crisis and its ilk were desperate attempts to catch up to Marvel’s late ’90s adoption of a similar darkness with stories like Daredevil: Guardian Devil, which starts with a teenage girl being drugged, nonconsensually inseminated, and killed after she brings the baby to term, and ends with the murder of Karen Page.

Why is it that female nudity is fine for all readers, and female victimhood is apparently a prerequisite for “mature” storytelling, but male nudity must be Sharpied over the minute readers catch a whiff of it?

Let me be fair here: Batman: Damned is not Identity Crisis. The Black Label stories seem more thoughtful and the lineup of future creators inspires more confidence than the kinds of things we were seeing 10–15 years ago. No, I can’t ever quite suppress an eyeroll when the phrase “dark and edgy” pops up vis-à-vis comics, but it does genuinely seem like the goal of the imprint is to create beautiful, intelligent stories about complex themes, and not a desperate attempt to earn a seat at the big kids’ table.

But this panicked censoring of Bruce Wayne’s Batusi—or shrewd publicity move, whichever it is—harkens back to the same childish (and uniquely American) mindset that gives us barely clothed women and graphic violence as a matter of course, but shies away from actually dealing with the bare and non-exploited human figure without hysterics. A naked human being in his own home (or subterranean lair, whatever) should not be seen as intrinsically more problematic than it would if he were female, or cause more consternation than voyeuristic stories of assault.

And until the mainstream American comic book industry gets its priorities in order about that, it will never be truly adult. Bat-penis or no Bat-penis.