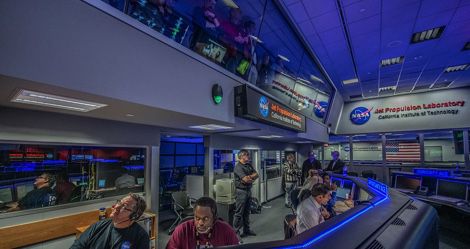 I didn’t know the Mars rover had a name until recently. Then I saw a post on social media. NASA had been monitoring the Opportunity Rover but has said that a dust storm on Mars has coated the panels she needed to absorb sunlight or damaged her internal clock, and they lost contact with her eight months ago. There is discussion if she can still be saved, but NASA declared her dead and sent her off with grieving missives on February 13.

Social media exploded. People have drawn art to go with her last words: “My battery is low and it’s getting dark.” Users have asked Tony Stark to pick up Opportunity, or Oppy as her nickname goes. People have shared many crying emojis and sadness. Despite the nonsense that has happened on Earth, we have found time to mourn a robot we have never seen in person.

The most romantic thing I heard today: The NASA team played Billie Holiday's "I'll Be Seeing You" to Opportunity, the Mars Rover, as a final farewell. 💔#NASA #MarsRover #opportunity #farewell #illbeseeingyou #inalltheoldfamiliarplaces

Opportunity is on Mars. She is a rover who was meant to last ninety days. Instead, she has had a lifetime of fifteen years. Now what ends her is not the natives rising and overthrowing her, or nuclear war, but a coat of red dust. Dust that blocks her solar panels.

It feels bizarre that this robot, trudging through the Martian dust storms and sending messages, connected with us a short time before Valentine’s Day. We became attached to her in a relatively short amount of time. Our science fiction predicted robots doing great things. Despite that, the Western world underestimated the love. We got fear instead.

The West Fears the Machine

We Westerners have an interesting relationship with machines. Businessmen and women like using them to make money and reduce costs.  Machines reduce work, and increase them at the same time. We use them to watch television, brush our teeth, and communicate. At the same time, industrialization can erase thousands of jobs and turn us into cogs. We dislike that capitalism has turned us into workers that can be replaced at any time, and deemed worthless, while the machines can stay.

A robot, per Merriam-Webster, is “a machine that resembles a living creature in being capable of moving independently (as by walking or rolling on wheels) and performing complex actions (such as grasping and moving objects)”. The robots we see in fiction tend to resemble humans or animals; in real life, most functional robots lack recognizable faces or such. They occupy warehouses and factories, or even fly in the air as drones.

The most famous robot stories in the United States focus around the fear of the machines gaining sentience turning on us, or worse that we fail them when they need us. Isaac Asimov created the three laws of robotics, for example, as a means of preventing robots from hurting humans, and they are prevalent through his stories. Hal 9000 in the novel and film 2001: A Space Odyssey tries to kill the humans as a means of hiding his flaws, and to continue a mission without his astronauts knowing. The film AI: Artificial Intelligence is the worst of the lot in that a sentient robot child wants his adopted mother’s love and to be real, but can only achieve a fantasy version of that love through the help of aliens. It borrows beats from Pinocchio, including the fear of a child who can feel and doesn’t know about the world.

It could be that we Americans have a problematic relationship with deciding who does and doesn’t deserve basic decency and should be treated with humanity. Our first few policies were wiping out Native Americans and putting bounties, as well as arguing for a few hundred years about abolishing slavery. If we cannot even agree that children should not be in cages, then we aren’t ready for handling robots that question disparate treatments.

Perhaps we fear the mirror that robots bring to us. We cannot even see our fellow people as equals; what’s to say we can handle robot rights decently?

In contrast, when you look at the pop culture from Japan, robots are not seen as menaces. WIRED has an article on this: it ascribes Buddhist and Shinto culture with the gentler approach. In Japanese manga, the robots question if they have a soul, or purpose, but in general their first priority isn’t killing everyone once they understand humanity.

Astro Boy was one of those stories, made by Osamu Tazuka. After he loses his son in an accident, Dr. Tenma creates a robot in his son’s image. Dr. Tenma rejects the robot on realizing he didn’t revive his son. Despite being abandoned, Astro is a cheerful child who in various incarnations flies around to help people and robots alike. When he asks if he has a soul, Professor Hiroshi Ochanomizu in the 2003 anime asserts that Astro does, and reactivates Astro to adopt him and defend robots with “kokoro,” or a soul.

What Is Or Isn’t Love

Chobits by CLAMP also explores what it means to be a machine or more than that. In this manga, humans can have their desires shaped into a sentient being. The story is about a high school student that finds a Persocom robot in the trash and gives her a home on learning that she’s amnesiac. While the series has problematic tropes like “Born Sexy Yesterday,” it also has some meditative thoughts on our attachments to things and to people. We have the case of a woman who leaves her husband when he spends too much time with their Persocom, while in another case a baker married the Persocom he bought.

The latter story is utterly heartbreaking; Hiroyasu Ueda loved Yumi, and hoped they would spend their life together. Yumi’s memory chip malfunctioned, which meant she forgot her husband more and more over time; despite that, he refused to replace her, because she was more than a machine, she was his wife. She uses her last moment of clarity to save his life, at the cost of hers. When he starts another relationship with a human girl named Yumi, she questions if Ueda is just using her to deal with the pain of losing his first Yumi.

We love machines. We get attached to them, regardless of their resemblance to us. That’s why people like their Roombas, and why we don’t want to get them replaced if possible.

One irony is that robots have never betrayed us—at least, they haven’t yet. When we talk about Alexa spying on us or a FaceTime app revealing data, we don’t blame the app or Alexa. We blame the programmers, and rightly so, for violating our privacy. The machines are blameless for following their programming.

Oppy seems to be innocent from our perspective. Oppy has never voted for Donald Trump, espoused racist views or jokes at the dinner table, or locked immigrant children in a cage. She also hasn’t poisoned anyone’s coffee, as a sentient coffeemaker did to Bill Nye in the Netflix show Bill Nye Saves the World. She has taught us about Mars, and giving us all her life for that knowledge.

Fare thee well, Oppy. We hope to meet you again, in the stars.