This is a guest post from Maggie Thrash. Maggie writes books about the South, secrets and sapphism. She is the author of the graphic memoir Honor Girl (a Los Angeles Book Prize nominee), and the mystery series Strange Truth, which was inspired by her experiences at an exclusive prep school where she witnessed what goes on behind closed doors in the moneyed South. Follow her on Twitter @maggiethrash.

Last week a photo surfaced of some high schoolers in Atlanta playing “Nazi vs. Jews beer pong” at a party, complete with red Dixie cups made into the shapes of a swastika and a Star of David. The party didn’t occur in a trailer park or some dingy KKK dive bar as you might imagine, but in the home of a student from one of the ritziest, most elite private schools in Atlanta– my high school, in fact. Depressingly, the news barely surprised me. When I graduated from Lovett in 2003, anti-Semitism was rife among the student body. And though over a decade has passed since then, apparently not much has changed.

My first book, Honor Girl, is a graphic memoir about the summer I realized I was a lesbian at an all-girls camp in the South. When camp ended that summer, I came back to school with a new and uncomfortable awareness of the uber-white, uber-heteronormative, uber-Christian society around me, something I might have remained oblivious to if I hadn’t turned gay overnight. Suddenly I felt like an outsider, which attuned me to the other outsiders I’d previously blithely (and ignorantly) ignored. The Jewish students at my school were an extreme minority in an environment teeming with Southern-bred country club kids who had little respect for Jewish history and who blamed Jews for murdering Jesus. I witnessed different versions of “Nazi vs. Jew beer pong” on a regular basis, and every time I’d think the same thing: This is ridiculous. Like, laughably stupid– too stupid to be real. And yet it was. 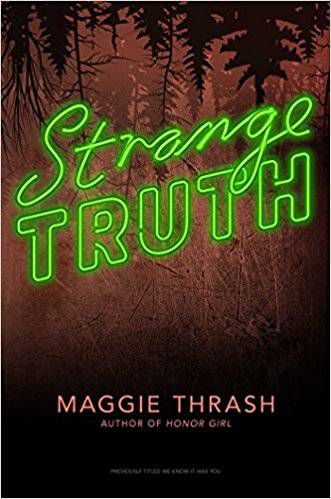 “Ridiculous” is a word often used to describe my YA novel Strange Truth– sometimes it’s a compliment and sometimes it’s an insult depending on how people read the book. Strange Truth is a zany, over-the-top whodunit about a Jewish teen detective named Benny Flax who solves crimes at a (fictional) Atlanta private school full of perverts and white supremacists. Rather than writing a somber, earnest contemplation of teenagedom, I wanted Strange Truth to reflect the horrible absurdity of my high school experiences and the “Nazis vs. Jews beer pong” era. To me, bringing satire to YA felt not only appropriate but necessary. Teens need to feel empowered to laugh in the face of hatred and stupidity. Too often, their lives are shaped by adults’ shitty decisions and prejudices; for many teens, a sense of humor is the only resistance available. Bigotry, sexism, and homophobia are many things– repugnant, frightening, serious, and damaging are words that come to mind– but they are also ridiculous: worthy of ridicule.

In the age of Trump, questions abound about the status of satire (is it dead? merely wounded?). It’s a valid criticism to say that we got into this mess because we spent all of 2016 laughing at Trump instead of taking him seriously. And when truth is truly stranger than fiction, it can be really hard to tell when something’s supposed to be a joke, or when joking is even appropriate. But satire is a literary tradition we can’t afford to lose. From A Modest Proposal to Catch-22 to The Colbert Show to the way we get on Twitter and make fun of Trump every single day– mockery is catharsis. It’s group therapy. It’s us screaming united into the void: THIS IS RIDICULOUS! Laughing at hate can bring it down to size, make it less formidable, less powerful. Teens are inheriting a deeply dysfunctional world. There is serious, daunting work to do. I just want to make sure teen readers have a space for when the ridiculousness is too much– books that allow them to laugh until they cry and cry until they laugh.