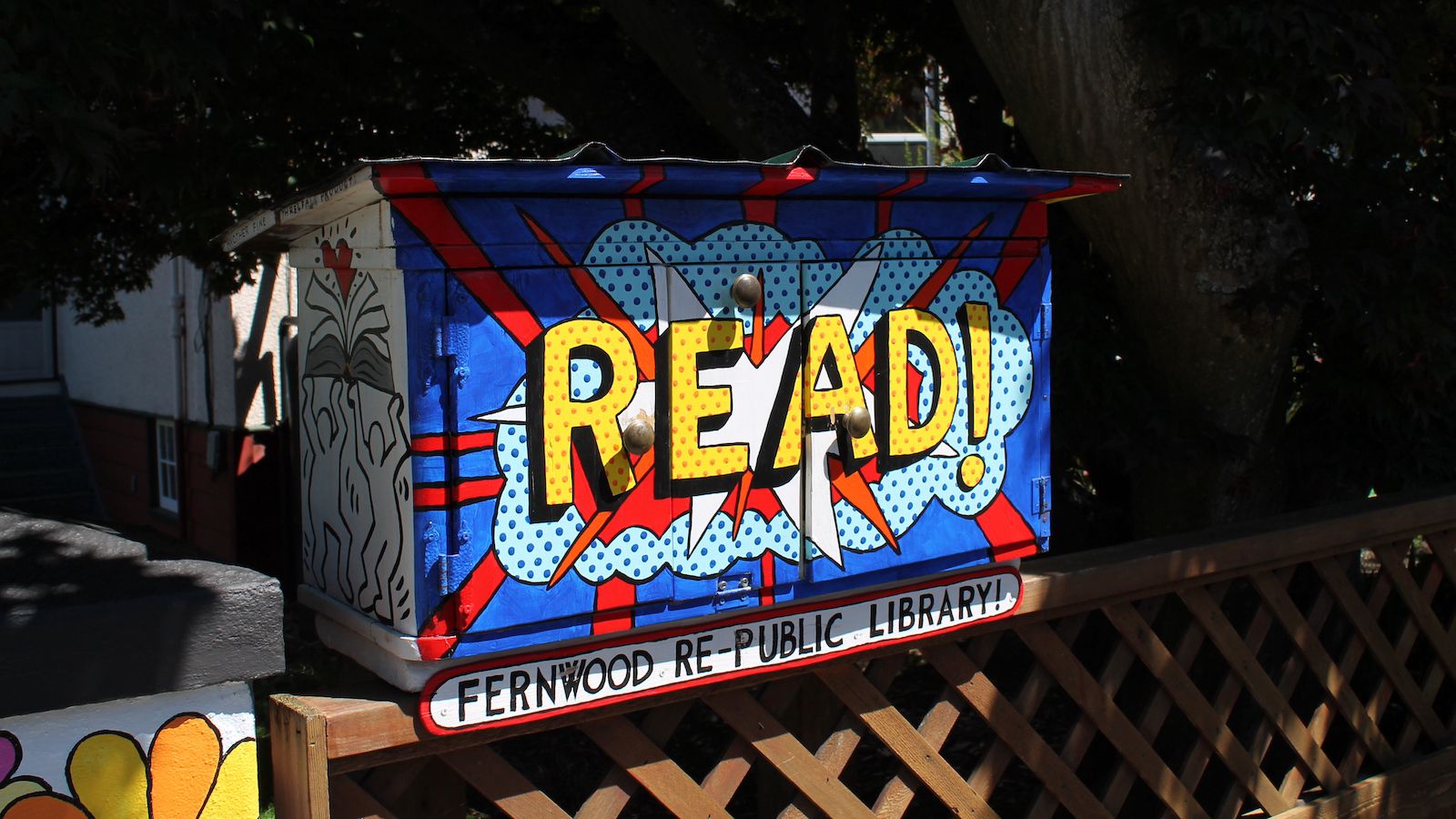 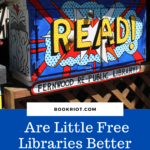 I recently had my second pandemic birthday. I’m in Canada, and we’re still far from back to normal. I only got my first shot weeks ago, and it will likely be months before I can get my second. That means celebration options are…limited. I decided to find a way to get out and enjoy the fresh air, but with a new perspective: hunting for Little Free Libraries.

Previously, I wrote about doing a LFL walking tour of my neighborhood. I really enjoyed the novelty of it, but several of the LFLs I saw were in disrepair and most had the same ratty James Patterson books or outdated nonfiction. I live in an area that I think has a fairly wide range of incomes and real estate values. There are plenty of rundown houses and some expensive ones. I love living here — we are friends with lots of dog owners on our block — but after my last LFL excursion, I got to thinking: are Little Free Libraries better in the wealthier areas of town? Do they have a better selection of books?

To find out, my partner and I packed up the car with books to give away, dogs to walk, and a camera to document with, then we headed to the nicest part of town.

I live in a city with almost 400 Little Free Libraries — a staggering number. We decided to hit two different areas: the wealthiest part of town, Oak Bay, then the spot with the highest density of Little Free Libraries, Fernwood. Surprisingly, although LFLs are more common in high-income areas, these categories don’t overlap. Instead, LFLs are crowded in the artsy part of town. This used to be a more affordable area, but it’s gotten a little more expensive lately (along with everywhere else in the city).

While we only visited a handful of LFLs in Oak Bay, I immediately noticed a pattern. The structures themselves were a lot nicer than the ones in my neighborhood. They looked either professionally put together or like they came as a kit. Some even matched the houses they stood outside!

The other thing I noticed, though, was that the book selection wasn’t any better than the LFLs I usually frequent. If you have ever visited a Little Free Library, you likely know which books I’m talking about. They’re the bestsellers from over a decade ago, beat-up mass market paperbacks, and other titles you can expect to see in the reject pile at a used bookstore (if we’re being honest).

I was disappointed. I thought that the wealthy area of town might have donated nicer books: newer titles and books in nice condition. The way I see it, there are three types of Little Free Libraries: the abandoned LFL, which is now completely falling apart and can’t safely house books; the average LFL, which has the usual mix of forgettable selections; and the curated LFL. The last category is for people who make their LFL an ongoing hobby. They remove the books no one wants and stock it with good stuff regularly. I was hoping that there was maybe a wealthy retiree around here who would be in this last category, but no luck.

One thing we did find, though, was a Little Free Library bingo card! This would quickly be a central part of our LFL hunt. It made looking through LFLs exciting, even if we didn’t find any books we wanted. My partner works at a used bookstore and I am a book blogger, so we both have a ton of books and very specific tastes in the ones we want to acquire, so it is rare for us to find a book we want to take home in a LFL. I highly recommend using this bingo card or making your own if you want to do a LFL walking tour, because it added a lot to the experience.

To give you an idea of just how many LFLs are in my city, here is the Google map we were working off of. See that clump near the middle, where the pins are so close together you can’t read anything on the map? That’s Fernwood, and that’s where we headed next.

Fernwood, the artsy part of town, has a LFL practically on every block. Some of them are almost side by side or are just across the street from each other. As we looked for a parking spot, we ended up parked across the street from a LFL completely by chance. It would turn out to be a good representation of the ones we would see in Fernwood versus Oak Bay: it’s hand painted and seems less like a kit.

We saw all kinds of LFLs in Fernwood, many of them painted and/or converted from something else. (The LFL on the bottom left was a newspaper vending machine in a former life.) I love the one painted in a comic book style! There were LFLs outside of businesses, a couple of the kit-style LFLs, and ones with three or four long shelves packed with books. We found a copy of A Little Life in the comic book LFL and Parable of the Sower in another large LFL. (The LFL pictured below that’s held shut with a chain is much bigger than it looks in the picture! It’s at least twice as big as the others pictured.)

By the time we’d hit about 10 Little Free Libraries, we’d checked off the majority of our bingo ticket. Cowboy main character? Found. UK mystery? Located. There were Dan Brown novels and cookbooks aplenty. We’d even found a few books worth taking home. (My partner also found a couple CDs to take.) I’d exhausted my supply of books to add to the shelves, so I began trading books between LFLs, because why not?

Although we stumbled on some gems, the vast majority of the books inside the Fernwood LFLs were the same variety that we saw in our neighborhood and in Oak Bay’s. I was being to wonder if there were any truly curated Little Free Libraries in Victoria, when we finally bumped into this gorgeous one.

This one is not only adorable to look at, but it’s clearly carefully maintained. Unfortunately for me, it’s maintained with parenting (the top shelf) and kids’ books (the bottom shelves). They are all in good condition and are shelved neatly. There more cat figurines inside, and the fact that they’re not glued down and haven’t been taken is a good sign! Alas, as I’m not a parent (and don’t wish to be), it wasn’t a great fit for me.

We even found a LFL-adjacent structure: a little free art gallery! Artists are encouraged to leave either artwork they want to give away or supplies. We took a copy of a zine called “Break the Cis-tem.” (You can see a peek of my pups reflected in the art gallery window!)

We also saw a few abandoned LFLs — one a sad plywood box with no doors that contained only a binder and two beat up books, one LFL that had begun to leak and was full of musty books, and one with no door but that still seemed to be used actively.

Early in our hunt, we almost had a line on the bingo card, but we were missing a Clive Cussler book — which seemed like an easy request. After two days and dozens of LFLs, we ending up finding one in the very last one we visited! We finished our adventure with three lines on the bingo card.

Here was our final haul. Three books, a zine, and — not pictured — two CDs. (My partner was very excited to see Big Shiny Tunes 6, and we played it on the way home.)

So what’s the verdict? Are Little Free Libraries better in wealthy neighborhoods? Well, first I have to give some caveats: these aren’t all the LFLs in Oak Bay or Fernwood (if you can believe it). They’re just ones that we could hit on a reasonable dog-walking loop. I also looked up a list of the wealthiest neighborhoods in Victoria and it ranked mine about Fernwood, which doesn’t match my analysis.

That being said, here are my takeaways. I think that Little Free Libraries in wealthy neighborhoods are likely to be nicer in terms of the physical structure, but they don’t guarantee any better books. The selection on average wasn’t noticeably different across the neighborhoods, though we did find more books worth taking home in the artsy area of town than in either the wealthy area or the mixed-income area — but I think that might have more to do with the sheer number of LFLs in Fernwood than anything else. Of course, the artsy area had more creatively decorated LFLs. It also had the only curated, themed LFL that I’ve seen in person.

So, in this smallest of sample sizes, I’d recommended checking out the artsy, hippie, new age, theatre part of town, if possible. That group of people is more likely to have a multitude of LFLs to choose from, and you might luck out in numbers alone. Even if you don’t, though, you’ll get to admire the artwork and design that goes into them!

Like last time, I appreciated this opportunity to explore my city in a new way. It was like a scavenger hunt or geocaching — but on easy mode, since the LFLs are pretty clearly labelled on the map. I also was surprised by how much fun I had using the bingo card! It helped keep my interest even when, half a dozen LFLs in, I hadn’t found anything I wanted to keep.

So if you can, I recommend going on your own Little Free Library hunt! It’s a great bookish way to get outdoors, see some areas of town you might not otherwise visit, and drop off books you no longer need. If you’re lucky, you might just find a treasure!