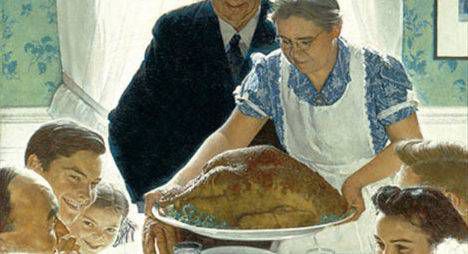 On December 5th, the New York Times ran an opinion piece entitled “Why We Miss The WASPS.” Yes, I understand that it was an opinion piece, which by definition means the author was giving voice to his personal take on an issue. Having read Douthat’s essay, mostly with my teeth grinding and using the majority of my self control not to terrify the person sitting next to me on a cross-country flight with my muttering and fist clenching, I must, in good conscience, explain that he isn’t fully advocating bringing back the old white male cabal of the ’60s–’90s (not fully) though he is most certainly in favor of bringing back their values.

As I am sure you will be shocked to read, I am very much not in favor of touching those values with the 50-foot pole I keep in my closet for shoving them as far back into history as I possibly can before they get their cooties on me, my kids, my friends, or my worst enemies because, quite frankly, no one deserves that kind of infestation on their person or in whatever sort of entity they think their soul might be.

But Shiri, you might be thinking, it was the era of family dinners and the America that was great and helping those less fortunate.

It was not. It was the era in which people died of AIDS by the hundreds of thousands because the higher ups thought the word “gay” indicated deviance, America was supporting vicious dictators by the score and noblesse oblige wasn’t noble. 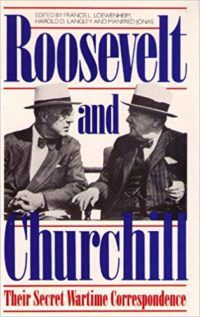 I remember being shocked and horrified by the contents of this book when I read it for background an in-depth project a group of classmates and I were doing on Franklin Roosevelt for AP American History (though I did still love going to the Roosevelt library). In it are unredacted communiques sent between Roosevelt and Churchill, in the heyday of Douthat’s gilded lily of a political era, in which it is revealed (this is common knowledge now but wasn’t during or after than war) that not only did Churchill and our own president know the attack on Hawaii was coming, they knew exactly when and exactly where and they allowed it to happen because it was the only way to convince the American people to join in the war effort. In addition, as far back as, I believe 1939 but definitely by 1940/41, both men knew about the Nazi death camps and made a conscious decision not to do anything about them. Guess noblesse oblige was on sabbatical while millions of people were gassed or shot and buried in mass graves.

Reader, they declassified them. If you want additional data, the CIA’s declassified assessment of the same showdown is here (with some redaction of “longer passages”). The Short Version, folks: John F. Kennedy was not strong, silent, and stoic leading up to the Cuban Missile Crisis. He was talking to Kruschev and to Castro and those conversations are what brought us to be brink of being blasted to radioactive dust. I’m not saying the fault was Kennedy’s alone, but his royal WASPness (yes, I know, he was Catholic; WASP is a state of mind here, folks, not a definitive checking of boxes) certainly didn’t help matters. Kennedy didn’t want to free Cuba from the tyranny of communism because he wanted to help the Cuban people. He wanted to “liberate” Cuba because he didn’t want to be able to see Russia from his house. So much for Camelot.

Iran-Contra: Reagan’s Scandal And the Unchecked Use of Presidential Power by Malcolm Byrne

But Shiri, you’re thinking, WWII? The Cuban Missile Crisis? Those were ages ago! Okay, fair enough. The Iran Contra Affair, however, I remember, and I’m only 40. Guess who was tied up in that garbage fire? Two of Douthat’s paragon’s of WASPdom: former Presidents Ronald Reagan and George H.W. Bush (who was Vice President at the time). Also embroiled: Robert MacFarlane (National Security Advisor), Caspar Weinberger (Secretary of Defense), members of Hezbolla (Lebanese Shi’ah Islamic political party; their paramilitary branch is the Jihad Council), Manuel Noriega (Panamanian dictator supported by the United States), Iran’s leadership, Oliver North (allegedly established the network that funneled funds to the Contras, charges dismissed in 1991), and John Poindexter (Deputy National Security Advisor/National Security Advisor). The quick and dirty is thusly: The U.S. government, and President Reagan in particular, were so terrified that communism might happen on this side of the Atlantic, he had his people set up a secret network to allow the sale of weapons to Iran during a period in which Iran was under an arms embargo by Congressional decree. The money from those sales was funneled back through the network and delivered to Noriega to fund his Contras and support his horrific, murderous dictatorship in Nicaragua, lest the people be allowed to choose a government with which old white men did not agree. Regan never went down for this, nor Bush, nor anyone else really North and Poindexter were both convicted, but charges were ultimately dropped a few years later and both have gone on to have successful post-scandal careers, despite evidence of their chicanery. Good evidence. And in case you’re wondering about the credentials of this particular book’s author? Byrne is the Deputy Director and Research Director of the National Security Archive. 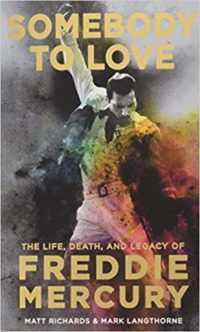 Somebody to Love: The Life, Death, and Legacy of Freddie Mercury by Matt Richards and Matt Langthorne

Freddie Mercury died of AIDS-related complications in 1991; he was 45 years old. At the beginning of the epidemic, most people only survived 18 months–3 years after diagnosis, but Mercury, due to his unusual financial situation, which provided for early access to new medications, survived for ten. I’m a nurse when I’m not wearing my Book Riot hoodie, and I remember watching my first patient die of AIDS-related pneumocystis with her five kids in the room in 2006.

AIDS is now, for most who contract it, a chronic disease to be managed rather than a death sentence, to the extent many have forgotten it even exists (a dangerous trend but that’s a subject for a different post), but during the glorious days of the Reagan and Bush administrations, if one contracted HIV/AIDS, one died. There were many reasons that was the case, as Somebody to Love, a split biography that runs parallel courses tracing both Mercury’s story and the epidemiology of HIV/AIDS in the U.S. and the UK. Two of most abhorrent, however, were related: stigma and lack of education. Because HIV/AIDS was seen more prevalently in the gay community when it first appeared in the U.S. and UK, and among IV drug users, it was dismissed as a disease of deviants, righteous punishment for behavior that didn’t fit the mold set by the evangelical protestants at the top of the pyramid. And because it didn’t fit that mold, and because of the atrocious notion that educating people about ways to protect themselves would encourage such deviance, at-risk populations were left to fend for themselves, hiding in dark corners (sometimes literally), taking risks because to do otherwise was to risk exposure and lose family, career, or lives. The money that could have gone to HIV/AIDS research and education went elsewhere and people died.  Even being as famous as the lead singer of Queen couldn’t protect you. 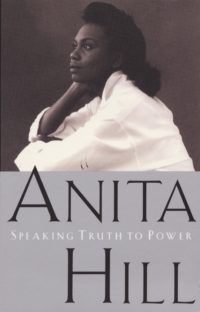 Do you remember who appointed Clarence Thomas to the highest court in the land? I do. It was George H.W. Bush. Bill Clinton my have been a philandering bonehead but at least he gave us Ruth Bader Ginsburg. Bush, though? Clarence. Thomas. Do you think Anita Hill is the only one affected? Of course not. So read her story in her own words. Consider it rippling exponentially and then consider once more how much those old white men care about you, about your mothers and wives and your daughters.

Not That Bad: Dispatches from Rape Culture by Roxanne Gay

We. Are. Still. Explaining. Ourselves. We. Are. Still. Begging. You. To. Believe. Us. We. Are. Still. Watching. Him. Get. Away. With. It. And you think going back to the days when the Prime Minister of France brought his Mistress to state functions, when one President used to sneak actresses into the White House and another used cigars as sex toys is going to make things better? You think that just because we didn’t hear about Reagan or either of the Bushes dallying they didn’t do it? Look, if you don’t like that bridge in Brooklyn, Pittsburgh has more than Venice and I’m sure I can convince the city to cell you a couple of them. I don’t mean this as a character assassination, I mean it to make a point: women don’t mean anything to most of these men. They’re the star on the top of the National Christmas tree, shiny and pretty, to be used, displayed, and discarded. And great bearded dude in the sky have mercy if we should dare to attempt protest: even if the husband supports us (and I will give Mr. Rodham Clinton that much), some other old, white dude whose name is something like Sernie Banders will interrupt us and shake his finger at us as though we’re an unruly child rather than a former First Lady, Congresswoman, and Secretary of State when all he’s ever done is represent a state of retired hippies with too much money breathing too much methane from too many cow farts.

Rape isn’t about sex. It’s about power. This group Douthat admires so much? They’re still trying to take ours. We view that a little differently these days. Bummer for them. 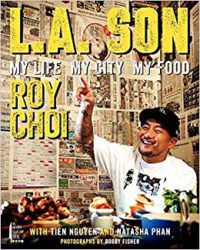 L.A. SON: My Life, My City, My Food by Roy Choi, With Tien Nguyen and Natasha Phan

The menu in D.C. changes whenever a new administration comes to town. Old Ebbitt Grill is always the first to publish its new offerings or, at least, it used to be (I attended George Washington from 1996–2000 so things may have changed). We knew something new was coming with the Clintons because, while Mr. Clinton fits the WASP criteria to some extent, the menu options become less red meat saturated and included a lot more veggies than they had when Bush the elder was running things. The Clinton and Obama era menus also offered elements from other countries and cultures which hadn’t been the case previously.

Which is more representative of this whole thing than you might thing.

Chef Roy Choi came over from Korea as a child. He grew up in L.A., first in a Koreatown revived by his community (every family in his neighborhood put money in a communal pot. Weekly, someone would get the pot to start a local business and then, once the business was off the ground, increase their weekly contribution to help someone else do the same). When his family’s business failed, however, Roy was moved out of Koreatown and to a different part of L.A. where he started exploring other cuisines including Vietnamese, English, Middle Eastern, smoothies…and while becoming an L.A. son wasn’t always easy for Choi, his journey through food, and through the nation, is what made him an American. Because it isn’t homogeneity that brought us here. It’s all of us, together, learning everything that makes us who we are and learning about one another.