Reading is notorious for allowing you to be anything you want—you can be a wizard, a cartographer, or a musical prodigy. But why is everyone so fit and well?

Diversity has come a long way in the book world over the last few years, but some areas are still lacking. Chronic illness is one of those areas unless you’re looking for the mental health side, which has a lot more coverage. Yet, mental health still tends to appear in literary books about being ill, rather than as part of daily life in genre fiction, like sci-fi. 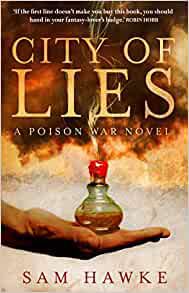 If you suffer from a chronic health condition, books aren’t currently offering much scope. I’ve come across one book in recent years that included a character with a chronic health condition—City of Lies by Sam Hawke. Kalina wasn’t the main character, but she wasn’t thrown in as a diverse token character either. She was physically limited and exhausted a lot of the time, but she had a role to play, she was crucial to the plot, and she got on with her life. She was inspiring. I put the book down thinking yes, this is epic! Wait, why aren’t there more of her? Why is she the first character with a chronic health condition I’ve come across? As an avid reader, when you discover something diverse and then realize you’ve never read anything like it before, it’s a big deal.

I didn’t go into the book expecting a diverse character. I came across Kalina by accident, which felt like magic. To pick up a fantasy novel and find a character like me? I was amazed, but also sad. And when I read over my last two sentences, I realized my delight and surprise is not how it should be. Readers should be able to pick up a book at random and have it filled with all kinds of people, without that being a huge surprise.

There’s a significant gap in the industry, which is a massive shame in the current bookish climate. There’s plenty of hope, though. Readers are clamoring for more diverse books and embracing those that exist. It’s only a matter of time before there are dozens of books with chronically ill characters to love. I can’t wait to see a Hermione Granger with ME, or a Nesryn with fibromyalgia.

Genre fiction is becoming more diverse, but it lags behind the literary genre. There are some great SFF books where diversity is done right. However, there are still far too many where someone with a different skin color gets thrown in to tick a box. Or worse, gain extra promotional weight. Genre fiction needs to up its game, and City of Lies is a great start.

Readers want diversity within their regular reading. We need a blind character in space opera or a bipolar elf in epic fantasy. The diverse treasure that is City of Lies is everything readers are asking for right now, but the biggest question on my lips is: Why aren’t there more?