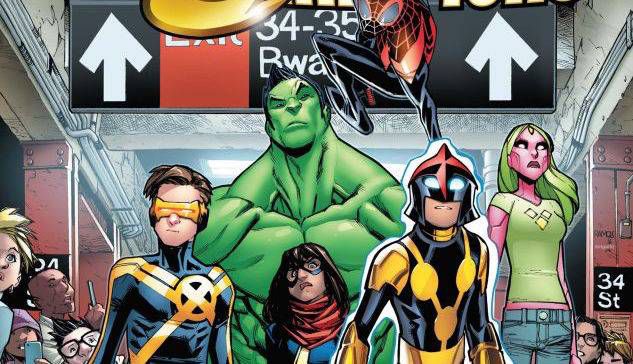 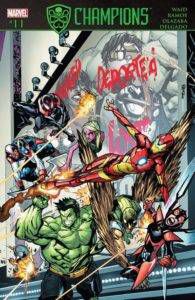 “Poor little guy,” says Patriot to the rest of the Champions upon finding a newborn in a Las Vegas otherwise left decimated and lifeless by a Hydra attack, “What do we even do with him?”

“Make sure,” Miles Morales, Spider-Man, answers,” he doesn’t grow up in a country ruled by fascists.” After comforting the baby, the young man, still a high school student, continues, “We can do this, yeah? We can swing at Captain America and take him down?… Yeah. We can.”

In case you missed it, it isn’t just the Marvel Universe being run by fascists at the moment.

By now, you’ve heard what happened in Charlottesville, Virginia over the weekend. You’ve seen pictures of men, in 2017, waving swastika emblazoned flags and offering Nazi salutes and you’ve wondered: is this my country? Is this the Unites States of America? Is this the nation once considered the world’s bastion of freedom?

A woman was murdered because she dared stand up to fascist dirtbags. Her name was Heather Heyer. I fear she will not be the last.

Can we stop what’s happening?

Can we fight it?

Damn right we can.

Take a page from the Champions playbook.

Choose your weapon, aim, and fire.

Fight any and every way you know how.

Who are the Champions? A team comprised of Marvel’s teenaged heroes, several of whom (Ms. Marvel, Spidey, and Nova among them) are former Avengers who left the team during the Second Civil War out of disgust and frustration. Ms. Marvel isn’t with the team in this latest issue: she has her own fascists to deal with in the person of Jersey City’s new mayor and his deplorable cronies who are rounding up Inhumans for deportation, including both Kamala and her brother.

Let’s take a look at who’s defending us in the parallel Marvel-verse, who have willingly gone into a war zone to search for survivors amidst ruins, rubble, and corpses. Amadeus Cho/The Hulk (Korean-American), Joaquin Torres/Falcon (immigrant from Mexico), Nadia VanDyne/Unstoppable Wasp (immigrant from Russia), the aforementioned Miles Morales/Spidey (biracial), Viv Vision (synthezoid), RiRi Williams/Ironheart (POC), and Patriot (POC, we don’t know his real name yet). Every member of the team is under the age of twenty. They are doing what they do willingly with no backup from more established heroes (not all of whom are hailing Hydra – Hawkeye and Red Wolf (Native American, tribe unspecified) are coordinating the rebellion but are in the midst of their own battle). Each Champion has different abilities. Each one has a different level of experience hero-ing (issue #11 is, for instance, Patriots first outing in the suit). They are horrified and terrified and still they fight.

Joaquin says it better than I ever could:

America means opportunity… It means freedom from tyranny. I have a very big place in my heart for freedom.

He and the other Champions are willing to fight for that freedom. They are willing to die for it. They busted up an internment camp intended to contain Inhumans even though to do so risked putting everyone on the team on Hydra’s radar, including Ms. Marvel, herself an Inhuman. A Muslim Inhuman. They are fighting fires and digging through ruins and boarding planes of the dead all in the hopes of finding someone, anyone, still alive.

Someone they can save.

Can we do any less?

Am I suggesting we form a militia and go hunting? I am not. I’m not usually an advocate of violence (though the hubs and I have told our children, on multiple occasions, that it’s always acceptable to punch a Nazi). I’m suggesting we, like the Champions, use whatever skills we have to protect one another. Use words, use art. Make comics. Cook food from different countries for your children and neighbors to experience. Learn a language. Learn a culture. Read a book about a country you know nothing about. Talk to people from different places, ask questions. Open your home, open your place of worship. Travel the country, travel the world.

When you see intolerance, step in if you can and, if you can’t for whatever reason, call someone who can. Sit beside a woman wearing a hijab on the bus  Share music with your office mates, ask friends for new recommendations.

But do not remain silent.

Every time you cross a border or a boundary which stops someone else, you are committing an act of rebellion. And small acts of rebellion, be they rescue missions or poetry, battle or bridge building, they come together and form revolution.

The Champions remind us too we are not a monolith. We are the American people. All of us. Puerto Rican and Pakastani and European Jew. African, Caribbean, Korean, Chinese, Japanese. European and Central American and Native American.

We are not a monolith. We are the American people.

And if the folks at the top are going to ignore their responsibilities to protect the people, worse yet, encourage  and condone hatred and fascism and supremacy, then it falls to the people, to we the people, to remind them it is we who are the foundation of this nation, we who hold the power, we who will protect one another. If one member of the team is in danger, we are all responsible for forming the shield wall. If one of us is targeted, then the rest of us must play the role of countermeasures.

If the heroes we have trusted fail us, we must become the heroes.

Think comics are just kid stuff? You’re wrong though, in this case, the kids are leading the charge, reminding us of what true heroism is.

We’ve seen now, what happens when we forget.

We’re lucky to have the Champions to remind us.