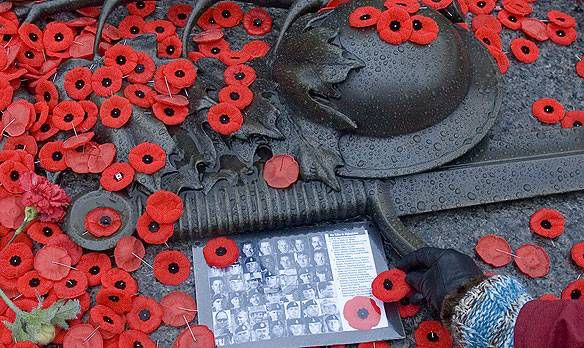 In Canada and across the Commonwealth today it’s Remembrance Day, and at 11:00 on November 11 many of us will be standing at monuments and cenotaphs across the country observing a moment of silence in honour of veterans, and thinking about the cost of war in all its many forms.

I’ve always associated Remembrance Day with literature, and specifically with poetry.  I think most Canadian school children probably do, raised as we were with Lieutenant Colonel John McRea’s anthemic poem “In Flanders Fields.” It was the first poem I ever remember memorizing — for a cenotaph service at school — and I still hear it in my head today in the sing-songy tones of grade school poetry recitation, which as I get older serves to make the poem more moving and tragic.

In Flanders fields the poppies blow


Between the crosses, row on row,
That mark our place; and in the sky
The larks, still bravely singing, fly
Scarce heard amid the guns below.

We are the Dead. Short days ago
We lived, felt dawn, saw sunset glow,
Loved and were loved, and now we lie
In Flanders fields.

Take up our quarrel with the foe:

Check Your Shelf Newsletter
Sign up to receive Check Your Shelf, the Librarian's One-Stop Shop For News, Book Lists, And More.
Thank you for signing up! Keep an eye on your inbox.
By signing up you agree to our terms of use
To you from failing hands we throw
The torch; be yours to hold it high.
If ye break faith with us who die
We shall not sleep, though poppies grow
In Flanders fields.

McCrea, a Canadian doctor and huge supporter of the war effort, wrote this poem after presiding over the funeral of a friend and fellow soldier at Ypres in 1915. This was one of the first uses of chemical warfare. McCrea had a life-long interest in poetry and wrote often about death, even before the war. The certainly apocryphal tale of this poem’s publication is that McCrea scribbled it in the trench and then, dissatisfied with his work, tossed it away. It was supposedly rescued by a fellow soldier who then convinced McCrea to submit it for publication. The last stanza has long been criticized as being overtly recruitment-focused, and indeed the poem was used to rally recruits throughout the Commonwealth; McCrea, who believed strongly in Empire and a 1915 sense of wartime duty, was pleased that his poem was used this way. It’s probably now the most famous poem in Canada (it’s even on our $10 bill), and a standard reading at Remembrance Day services from coast to coast to coast. McCrea, though, died of pneumonia in January of 1918 and never saw the end of the war.

Poetry of the First World War seems to relate either to recruitment, as “In Flanders Fields,” or anti-war outrage, as with my favourite poet of the war, Wilfred Owen, who held the rank of Second Lieutenant but also suffered desperately with shell shock. Owen died one week to the hour before Armistice near Ors, where he is buried. (In death, he was promoted to Lieutenant.) I like this contrast to McCrea because as well as both poems being written in the context of chemical war, Owen’s famous “Dulce Et Decorum Est” is in fact a response to particularly civilian recruiters using poetry (think of Jessie Pope here) to seek soldiers for the war effort.

Bent double, like old beggars under sacks,
Knock-kneed, coughing like hags, we cursed through sludge,
Till on the haunting flares we turned our backs
And towards our distant rest began to trudge.
Men marched asleep. Many had lost their boots,
But limped on, blood-shod. All went lame; all blind;
Drunk with fatigue; deaf even to the hoots
Of tired, outstripped Five-Nines that dropped behind.

Gas! GAS! Quick, boys! – An ecstasy of fumbling,
Fitting the clumsy helmets just in time;
But someone still was yelling out and stumbling
And flound’ring like a man in fire or lime . . .
Dim through the misty panes and thick green light,
As under a green sea, I saw him drowning.

In all my dreams before my helpless sight,
He plunges at me, guttering, choking, drowning.

If in some smothering dreams, you too could pace
Behind the wagon that we flung him in,
And watch the white eyes writhing in his face,
His hanging face, like a devil’s sick of sin;
If you could hear, at every jolt, the blood
Come gargling from the froth-corrupted lungs,
Obscene as cancer, bitter as the cud
Of vile, incurable sores on innocent tongues, –
My friend, you would not tell with such high zest
To children ardent for some desperate glory,
The old Lie: Dulce et decorum est
Pro patria mori.

McCrea asks us, the living, to “take up our quarrel with the foe” and not “break faith.” Owen outlines the horror and, begging to put to death “the old lie,” entreats the powerful not to prey upon “children ardent for some desperate glory.” This morning, I will be struggling with my own thoughts about war and peace and sacrifice and travesty, and giving my thanks for the privileged position of only having to wrestle with such ideas through literature.