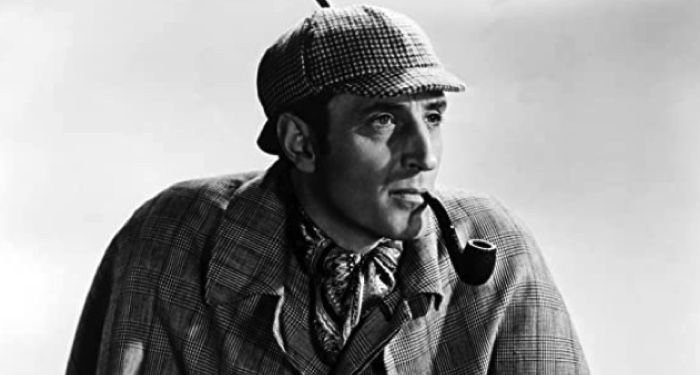 Since his initial appearance in A Study in Scarlet in 1887, Sherlock Holmes has been a focus of fascination and speculation. He and his companion, Dr. John Watson, have been one of the most beloved pairs in literary history, providing fodder for countless Sherlock Holmes adaptations in literature, radio, television, and film. Fans from all genres are fascinated by his powers of observation, his rational brain, and his cunning deductions. But where did he come from? Did he leap fully formed like Athena from the brain of Sir Arthur Ignatius Conan Doyle, or was Sherlock Holmes a real person, or at least based on one? What is it about Holmes and Watson that continues to pull us into his ever-twisting mind?

Join me as I delve into the true mystery: who was the real Sherlock Holmes?

Sir Arthur Ignatius Conan Doyle was born in Edinburgh, Scotland, in 1859. In 1864 his family was scattered across Edinburgh amongst relatives and friends due to his father’s growing alcoholism, and in 1868 he was sent to a Jesuit preparatory school in Lancashire, followed by Stonyhurst College from 1870 to 1875. He notes in his letters to his mother that the college preferred corporal punishment and ritual humiliation to compassion and warmth.

The modern reader may pause in confusion here; college at 11 years old? The education system as we know it today was in its infancy in the 19th century, and primary school usually ended at age 11. From there, children would either enter a trade or, if they were supported by wealth, preparatory schools, college, university, or a combination thereof. After Stonyhurst College, Doyle attended the University of Edinburgh, earning his Bachelor of Medicine and Master of Surgery degree in 1881. From there, he set up several medical practices that did not end up doing very well. While waiting for success in the medical field, Doyle turned to writing fiction. Sherlock Holmes, as mentioned, made his first appearance in 1887, and the rest, as they say, is modern literary history.

Anyone passingly familiar with Holmes will recognize the impact of Doyle’s background on his character. His father, in addition to being an alcoholic, had psychiatric issues that resulted in his death in 1893. Doyle’s degree in surgery lends an experienced clinical eye to Sherlock and Watson’s descriptions of crime scenes, while his experiences as a child in the tenements of Edinburgh speak to Sherlock’s surprisingly human relationship with his Irregulars.

Doyle’s son, Adrian, claimed that Sherlock was in fact his own father and not related to any other living person. I think we can discount this assertion, given the many references in his father’s own correspondence. But like any character with wide appeal, Sherlock’s origins run deeper than Doyle’s own experiences.

Dr. Joseph Bell (1837–1911) was, by all accounts, an extraordinary fellow in an extraordinary family. His great-grandfather was Dr. Benjamin Bell (1749–1806), who is widely considered to be the first Scottish scientific surgeon. While “scientific surgery” may sound redundant to modern ears, the elder Bell was a champion for many of the medical practices that are today considered standard, but at the time required fierce advocacy. He helped pioneer the adage to “save skin” during surgery, which helps grievous wounds to heal more quickly. He also hypothesized that syphilis and gonorrhea were separate diseases, wrote the bestselling A System of Surgery in 1796, and believed in the use of pain management throughout surgery itself.

From this legacy sprang Dr. Joseph Bell, who was the personal surgeon to Queen Victoria when she was in Edinburgh. In 1877, Bell’s clerk at the Edinburgh Royal Infirmary was one Arthur Conan Doyle, who recalled the following scene:

In one of his best cases he said to a civilian patient:
“Well, my man, you’ve served in the army.”
“Aye, sir.”
“Not long discharged?”
“No, sir.”
“A Highland regiment?”
“Aye, sir.”
“A non-com. officer?”
“Aye, sir.”
“Stationed at Barbados?”
“Aye, sir.”
“You see, gentlemen,” he would explain, “the man was a respectful man but did not remove his hat. They do not in the army, but he would have learned civilian ways had he been long discharged. He has an air of authority and he is obviously Scottish. As to Barbados, his complaint is elephantiasis, which is West Indian and not British.”

Between the above scene and the uncanny resemblance to Doyle’s description of Sherlock Holmes himself — right down Bell’s jerky, frenetic energy; long coat; and deerstalker hat — the outlines of Sherlock are clear. So clear, in fact, that Robert Louis Stevenson wrote to Doyle asking if he saw his “old friend Dr. Bell” in Doyle’s fictional creation.

The 19th century saw the development of police departments with investigative authority. With the rise of newspapers and penny presses, coverage of both crimes and the solving of them became big news. Edgar Allan Poe (1809–1849) is largely credited with writing the first detective story in 1841, “Murders in the Rue Morgue.” Several online resources about Poe’s work state that “Poe created the [Le Chevalier C. Auguste] Dupin character before the word detective had been coined;” however, the word “detective” dates back to 1828 according to the Online Etymology Dictionary. Whichever came first — the word or character — Dupin himself appeared in three of Poe’s short stories, solving crimes in “The Mystery of Marie Rogêt” (1842) and “The Purloined Letter” (1844). Using the practice of what Poe called “ratiocination,” Dupin put himself in the mind of the criminal and rationalized his way to the solution.

In his three stories featuring Dupin, Poe developed what would become standard tropes for the entire detective fiction genre: bumbling constabulary, a brilliant but eccentric detective, and first-person narration by a close friend — in the case of Dupin, an unnamed narrator. Dupin’s use of ratiocination is echoed in Sherlock’s mind palace; the parallels to Sherlock continue in the tracing of thought processes, of the unnamed narrator in Poe and of Watson in Doyle; and both enjoy enigmas.

In 1770, Wolfgang von Kempelen unveiled the Mechanical Turk, an automaton that could play chess. Automatons were all the rage in the 18th century; it was a time that could easily be called the Age of Clockwork. This one was unusual for several reasons, not the least of which that it could recognize cheating, and if the player attempted to cheat too many times, as one Napoleon Bonaparte did, the Turk would sweep all the pieces to the ground. Benjamin Franklin also faced the Turk, as well as many other prominent Enlightenment thinkers. In the 1820s and ’30s, the Turk went on a tour of the Northeastern U.S., where a young Edgar Alan Poe saw it and wrote “Maezel’s Chess-Player” (1836) in which he discussed the various automata he had seen, and how they related to Charles Babbage’s calculating machine. Babbage also encountered the Turk, and credited that experience with his thoughts about automatic calculation and early artificial intelligence.

Scholars have suggested that Poe’s Dupin was inspired by the Turk’s peculiar blend of human and artificial intelligence. Certainly the enormous calculating brains and only semi-human aspect of our great detectives — Dupin, Holmes, and later Agatha Christie’s Poirot — owe something to the Turk and what it represents: a rise of hyper-rational thought and observational process that is simultaneously fascinating and disconcerting.

In the end, like any fictional character, Sherlock Holmes finds his origins in many different places and aspects of the human experience. The answer turns out to be “all of the above,” which is not necessarily the most satisfying answer, but also reflects the creative process much more honestly. And in the end, the most important thing about the origins of Sherlock Holmes don’t matter nearly as much as the enduring legacy we enjoy from Doyle’s creation.