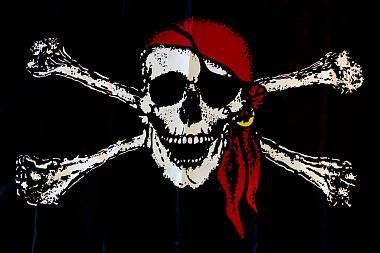 Today’s the day when we all try to sound like Geoffrey Rush, hoist the Jolly Roger over college dorms, and celebrate the fact that official permission means you can get away with just about anything. That’s right, it’s Talk Like a Pirate Day.

Naturally, a holiday of this magnitude requires an appropriate reading list. Treasure Island you already know, but what about these?

Jack Plank Tells Tales by Natalie Babbitt: Not all pirates are good at the job. Jack Plank was a terrible pirate, but as he tells his landlady’s daughter over the course of the book, he’s also bad at pretty much everything else. Not much blood and thunder here, but a fun story from the author of Tuck Everlasting.

Capt. Hook: The Adventures of a Notorious Youth, by J.V. Hart: J.M. Barrie never told us that Captain Hook had a long history with the Darling family, but this book fills in the backstory. James Matthew, the future Captain Hook, is out of his element at Eton, but he’s perfectly at home swashbuckling his way out of there.

Captain Blood, by Raphael Sabatini: Swashbuckling galore in this old-school novel, set in the 17th-century golden age of piracy. A wrongful conviction lands Peter Blood on Barbados, indentured to a plantation owner. Naturally he’s a little bitter — Blood’s a doctor, and he didn’t care that his patients were rebelling against the king — so when he and his fellow convicts manage to escape, it’s time for a bit of high-seas outlawry. Captain Blood is always in the right, though, making this one a sort of pirate equivalent of the hooker-with-a-heart-of-gold tradition.

Kingston by Starlight, by Christopher John Farley: There’s a reason the female pirates Anne Bonney and Mary Read turn up in so many stories — we only know little bits of their history, leaving plenty of room for novelists to do their thing. This one is told from Bonney’s point of view, and it’s as much about love and family as it is about life on Calico Jack Rackham’s ship.

The Pirate King, by Laurie R. King: Fair warning: if you’re not already familiar with King’s series of mysteries featuring Mary Russell and Sherlock Holmes, you might be a little lost if you start off with this, one of the later books. Russell and Holmes get mixed up with a movie production of Pirates of Penzance that turns out to have real pirates involved, and the storyline takes its cues from the melodramatic and over-the-top silent movies of the era. And I mean that in a good way.

The Pirates Next Door, by Jonny Duddle: This storytime favorite is as un-Captain Blood as you can get. It’s up to you to decide whether living next to a family of pirates would be an improvement.