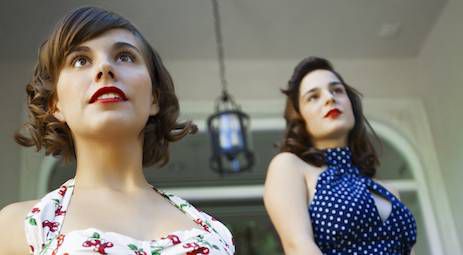 It’s Pride Month, and the larger-than-usual number of rainbow flags and equality slogans bandied about this month might be making you think, “Y’know, I am due to read some lesbian literature. But where do I go! What do I read! WILL SOMEONE GUIDE ME IN THIS QUEST, PLEASE.”

When I was newly out, I was reading anything that even glancingly referenced lesbians. And I really wanted a list. So, here’s a list of classic lesbian fiction for anyone looking.

Everyone’s got different opinions, so let’s be clear right off the bat that this is not definitive — favorites are going to be left off, or possibly dismissed. If you have a defense for them, that is why we have a lovely comments section.

That’s how we settle things here at Book Riot.

So! Gird your loins, here we go.

There are some Classic Lesbian Authors. “Classic” here usually refers to the 20th century, as before that, being a lesbian was at the very least subject to severe societal censure (or not seen as a thing at all, because “what can two women do together” indeed).

These women’s works are widely read and generally seen as quality lit:

Sarah Waters.
Focuses on historical fiction. There is usually a mystery or scandal of some sort.
Lesbian works include: Tipping the Velvet, Fingersmith, The Night Watch, The Paying Guests.

Patricia Highsmith.
Published in the 1950s under the name Claire Morgan. Usually wrote psychological thrillers.
Lesbian works include: The Price of Salt, soon to be out as a movie named Carol, starring Cate Blanchett and Mia Wasikowska.

Emma Donoghue.
Famous for the book Room, but before and after that has focused on historical and/or lesbian novels and short stories.
Lesbian works include: Hood, Landing, Kissing the Witch, Inseparable: Desire Between Women in Literature, Frog Music.

Jeanette Winterson.
Has an OBE (Order of the British Empire) for “services to literature” and has won two Lambda Literary Awards.
Lesbian works include: Oranges Are Not the Only Fruit, The Passion, Written on the Body.

Alice Walker.
Started out writing poetry, became an editor at Ms. in the 1970s. Focuses her writing on the struggles of black women.
Lesbian works include: The Color Purple.

Jane Rule
Took and ran with the startling idea also offered by Highsmith that a book about lesbians could end happily.
Lesbian works include: Desert of the Heart.

Fannie Flagg
An actress who frequently appeared on game shows in the 1970s, then began writing short stories and novels. Fried Green Tomatoes was praised by Harper Lee, and made into a film, albeit with the overt lesbian relationship turned into an apparent friendship.
Lesbian works include: Fried Green Tomatoes at the Whistle Stop Cafe.

Rita Mae Brown
Mostly writes mysteries. Was politically active in D.C. in the 1970s. Believes everyone is in fact bisexual, so putting her on a lesbian authors list seems counter to her wishes, but here we are.
Lesbian works include: Rubyfruit Jungle, Venus Envy.

Ann Bannon
Famous for her lesbian pulp fiction. Earned a doctorate of linguistics from Stanford and became a professor after her novels were published in the 1950s and early 1960s. Helped to shine a light on the butch/femme community with her character Beebo Brinker.
Lesbian works include: Odd Girl Out, The Beebo Brinker Chronicles.

Go forth and read about ladies having relationships with other ladies! And as Alison Brie learned in her literature class: