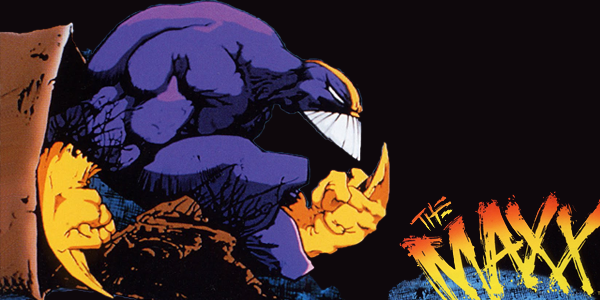 What would happen if MTV, the 1990s, and Saturday Morning somehow had a baby? Liquid Television. Liquid Television would happen. Maybe you too were, like, a third grader staying up until the wee small hour of 10:30 pm at a sleepover when MTV got real weird. How weird you ask? Weird enough to get a little bit bookish—weird enough for The Maxx.

Actual photo of me at said sleepover, discovering this sweet sweet gem. Taken at 10:31 pm. (Not pictured: Mountain Dew) (Also not pictured: me.)

The frequently strange yet beautiful Liquid Television had a sub-category of sorts called Oddities, where I found this strange yet beautiful adaptation of Sam Keith’s strange yet beautiful comic book series. When people get all excited talking about comics that focus on dreams and the subconscious, the conversation usually is eaten whole by The Sandman. And rightly so, because it needs no apologists telling everyone why it’s great. We all know. The rumors are all true. But The Maxx holds its own, weaving in bits of mythic aboriginal Dream Time with the grit and grime of city life during hard times in a psychological playground called The Outback.

It kind of disturbed me. In the good way. You know? I guess it was the first time I found something truly unconventionally gorgeous. Julie, the leading female character around whom all the story revolves, is a social worker with a scratchy voice and stomach that isn’t necessarily flat. And I found her so beautiful—her imperfection, her heart, her inconsistent animation, her unwitting participation in a swirling, violent fantasy set on the other side of a swirling, violent real world in which she desires to do some good for humanity. All that spoke to me, disturbing me and haunting me in the greatest sense.

The hulking purple hero with spiked hands and a lampshade mask didn’t hurt its appeal either. 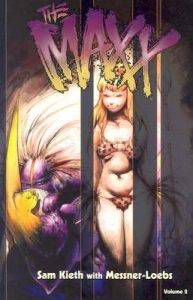 And I felt really cool and super grown up watching it. I sensed, even as my simple little self, that the private mythologies we carry around in our heads were something I was going to love and be drawn to for the rest of my life. I caught whatever episodes I could catch, and I waited and wished for more when Liquid Television finally dried up for good.

The Maxx did not die with it, however.

I wish I could remember the moment I realized The Maxx didn’t live exclusively on TV sets at friends’ houses–it lived in its intended format in panels splashed over pages found in long boxes at my local comic book shop. The story found on MTV lived on, and even expanded to new places in later issues that did not make it onto the screen. And I loved them hugely. You might, too. Conveniently, it was re-issued a few years back with new coloring that is basically to die for. What a time to be alive!

I hesitate to say things were ahead of their time in some way, but maybe The Maxx was a little ahead. How many times have you heard someone in recent years emphatically declare that, say, Betty White was his or her spirit animal? Eleven billion, right? The number is eleven billion. While spirit animals are obviously not a new concept, pop culture has swept them up into its lexicon. A crucial, central point of The Maxx is the connection between us and our spirit animal. Does Betty White make an appearance? Uh, well. I will say no more, but check the series out. In any format. In every format.