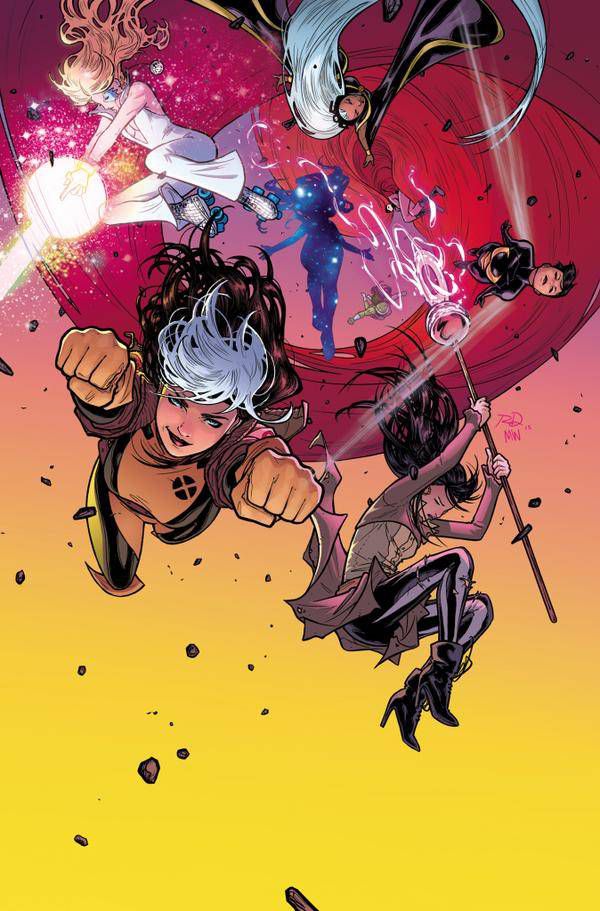 Marvel made a big deal about A-Force, the first all-female team of Avengers, written by two women, G. Willow Wilson of Ms. Marvel acclaim and Marguerite Bennett, a rising star an the co-writer on Marvel’s Angela: Asgard’s Assassin.

But details were a bit sketchy. It would arise out of Secret Wars. But how? Why?

Now details have begun to emerge. On Marvel’s Battleworld event site, they’ve listed “Arcadia” as the domain of Battleworld “only populated by the women who have earned the title of protector, savior and Super Hero.”

This perhaps explains a bit of the imagery to come from the series — Storm in her classic outfit (and hairstyle), Dazzler in her roller disco outfit, etc.

And all of this begs several questions to the reader who is intrigued by the initial announcement. Let’s tackle these questions in short order and see what happens.

Is this series set in a “fabricated reality?”

It would appear so. Obviously, we haven’t read the book yet, but by all accounts, this Battleworld is made up of a patchwork of different Marvel realities. This one is either entirely women, or at least the heroes are all women.

What does that say about A-Force? That the women get to be on the team on when all the men are gone?

I sure hope not. That’d be a pretty big misstep. I think you can hear me say as much on the recent Oh, Comics! podcast, in which I tell Paul that the one thing I hope they DON’T do is fabricate some kind of weird reason for only women to be in charge.

And while we’re talking about “Oh, Comics!” I highly recommend you listen to the episode with Preeti and Ali Colluccio, who basically tell you straight up that what women who read comics really need from women in comics is for them to be treated like… you know… real people. Not put on some weird pedestal in an alternate reality.

Is this whole series going to be set on Battleworld?

I honestly don’t know. And I’ll tell you — this has me a bit worried. Launching A-Force out of such a set-up is a bit confusing for new readers. Will it be a clean jumping-on point? Will you have to read Secret Wars to understand?

Comics often launch out of events. And this can often help sales, but it doesn’t always lead to the best reading experience. I’ll cite a recent personal example: I’m a big fan of writer Dennis Hopeless, who I really came to appreciate in his run on Avengers Arena. I’m also fond of the Spider-Woman character. So, a Spider-Woman comic book written by Dennis Hopeless seems like a good thing, right?

Except I picked up issue #1, and I was dropped into the midst of a universe-hopping Spider-verse story arc that seemed to focus more on the new character Silk than Spider-Woman. First issues are so crucial to giving us that first impression of what the series will give us. And I will be honest, I did not pick up issue #2.

But wait… What happens when Secret Wars ends?

Now, this is where the good news begins. I will be checking out that Spider-Woman series again soon. The nature of ongoing serialized comic books means that there will come a new jumping-on point, and I’d still like to see what Hopeless can do with the character. Seems like that new costume might accompany a good return entry point.

We can also extend that same potential to A-Force. Casual readers could possibly be in for a rough start, but when the dust settles on this event, perhaps a series with a less fabricated premise can organically spring up.

So should I even bother with this series?

Short answer? YES. We’re not ending this on a down-note.

Here’s the deal. I’m a long-time comics reader, so I’m not going to tell you NOT to speculate on news and press releases — it’s part of the game. It’s something I actually really enjoy doing as part of the comic book reading hobby.

But I like to be careful not to form an opinion before the book has come out. I like to speculate, sure, but at the end of the day, I’m going to give this book a chance. Why? Because G. Willow Wilson and Marguerite Bennett, that’s why. Because Wilson absolutely won me over with Ms. Marvel, and my enjoyment of most of these mainstream super-hero books always always comes down to the creators.

Maybe Wilson and Bennett have something amazing up their sleeve for an alternate reality. Maybe they’ve got a solid plan for moving past Secret Wars into something that feels more organic. Hell, maybe they’ll just win us over with amazing character depictions and interesting plots.

Until l’ve read that first issue, I’m not discounting any of it.