Voltron: Legendary Defender is one of the best reboots that a show could get. It has a POC cast, with a suspenseful storyline, and beautiful animation. In addition, it integrates several arcs from earlier comics brilliantly, with devastating results. Airing short seasons twice a year, each one is welcomed, and binge watched. My friends scream happily about it to me after binge watches.

Voltron is about a bunch of students at a military academy who fly out into space and find out they are the new Defenders of the Galaxy, piloting five robot lions. Shiro, the oldest and the adult, has survived horrific mutilation and trauma after colonizing aliens called the Galra kidnapped him and his former teammates, Matt and Samuel Holt. Pidge, aka Katie Holt, wants to find her dad and brother, and to rescue them from the Galra. While Lance and Hunk mainly fight because they want to leave behind a peaceful world so they can return home, Keith seeks answers about his past and his parents. Princess Allura wakes up ten thousand years after the Galra wiped out her people. The Galra in the meantime want the lions, and the power they possess.

In short, the reboot has a lot of elements that make up a good cartoon: likable characters, high stakes, ongoing plot lines that keep advancing, and moral ambiguity. It improves on the original anime’s flaws, and having four POC cast, plus aliens that are also brown-skinned, speaks personally to me. 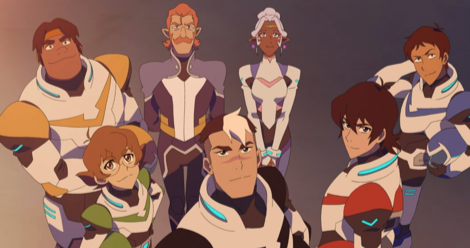 Despite this, there seems to be one thing that seems to dominate the fandom: shipping. And I don’t mean shipping as in people are saying which ship is better and leaving it at that. A few fans dominate the conversation, and want to impose ships in canon. The key word is “few”; I’m a part of the Voltron fandom, as are several of my friends, and we don’t impose ships.

Drawing fanart or writing fan fiction is not imposing, mind. Harassing the creators and voice actors about your ships is an imposition, however, and this has to be said. There is a line that a fan cannot cross.

In canon, Team Voltron is a family first and foremost. Pidge in season one struggles with her desire to find her family, and her responsibility as a Voltron Paladin. Eventually she comes to accept that she can’t just abandon her team when they need her, and while she finds Matt and Sam, she can cherish the people in her present. Lance will flirt with anyone or anything female, but he will also take a bullet for anyone on his team. Keith fights abandonment issues and his fear of losing Shiro again. Allura tries to figure out who she is without her people or old home; Coran wonders the same thing while keeping everyone alive.

The RPG Monger on YouTube detailed a video with some of these impositions: Shiro’s voice actor Josh Keaton was harassed for voicing his opinions about shipping, while fans that got to see exclusive footage of unreleased material refused to delete it unless their ships came to life. The arguments get muddied with people screaming about who can or can’t consent, and demonizing those who don’t ship their ship. They ignore the playground that comes with fanfic and fanart. The point of fan fiction is you can create that chemistry, in your space, and focus on the joy of creation.

For the record, I don’t ship anything strong; in the beginning I thought Klance was cute, and Lance is a strong character, but I’m shying away from it. The team’s strong platonic bonds through space battle the most, as they all fight a war they didn’t want.

Why Shipping in Space?

It does surprise me that shipping ended up dominating the fandom conversation more so than the plot, which is carefully crafted, or the dialogue, which started out cheesy. I’d rather see more analysis on the villains, for one.

My guess would be that we have seven scared survivors of war in space together. They’ve all faced horrific events, or departures, and the only way to survive is to press forward and save the galaxy from the Galra. Lance cries on realizing how much he misses home, and his family, and Hunk tries to cook to deal with the stress. We want to give these characters a happy ending.

These problems have been in the fandom since the show aired. Josh Keaton for his part forgave the fans and released a song video on his birthday, to show no hard feelings. Bex Taylor-Klaus, who is facing some of the same nonsense, is standing her ground on Twitter.

We finally got a ship in season seven. I’m not spoiling it, though it makes me a little uncomfortable in concept since I haven’t seen the execution. All the same, my friends who watch the show say it’s well done. Who doesn’t say that? Both the fans with legitimate concerns that it employs a problematic trope, and the shippers. The problem is that the concerns got muddied with the screaming, to the point where it seems ridiculous. The creators released a several-page apology laden with spoilers that addressed they knew the trope was a problem. Some fans are still not satisfied.

This is a Rubicon to cross, if a fan chooses to do so. The creators for their part are not trolls, treat the fandom decently, and interact as regularly as possible. We are getting a good show. If you don’t like it, write fan fiction or draw beautiful comics or draw art. You all have lovely talent.

If we need to criticize, we can criticize. If we demonize and cite morality, then there is a problem. Voltron is about finding family when you are missing your loves ones dearly. I will remember that.