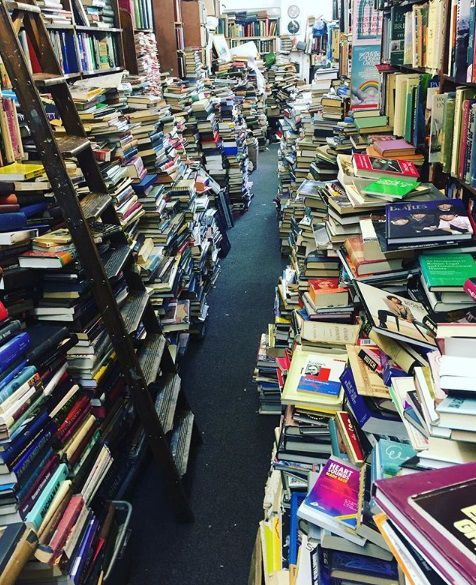 I think I’ve just visited the best bookshop in all of the UK: The Voltaire and Rousseau Bookshop in Glasgow, Scotland.

I’ve written before about amazing used bookshops: Camilla’s in Eastbourne always comes to mind when describing a bookshop that is on another level. 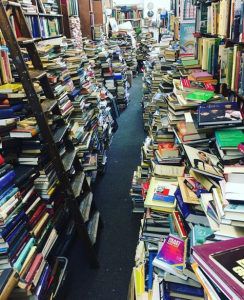 However, I think I have found a worthy competitor. When I went to Glasgow, Scotland recently for a librarian conference, I did what I always do when I visit a new place: I looked up bookshops to visit. The first one that popped up on my phone was called “Voltaire and Rousseau,” and it was only a 15 minute walk from where I was staying.

I did no research on it, I simply plugged it into Google Maps and starting walking. Once I got there, I was sure that Google Maps had steered me wrong. Situated down a tiny street called Otago Lane, Voltaire and Rousseau has almost nothing on its exterior to tell you that it’s a bookshop or even a functioning building for that matter.

Beside the entrance were a pile of old bicycles, a box with a rotten suitcase stuffed into it and blue tarps covering even more bicycles and various household objects.

I turned around and went back to the larger street, convinced I had the wrong place. It was then that I noticed the little rusted sign hanging from the cream-coloured exterior with veins of rust dripping down its side. I had arrived after all. 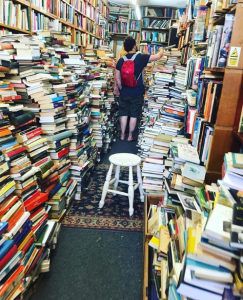 After walking in, I almost immediately stepped on a small pile of books that were on the floor. I tried to right myself and half-fell against another pile of books beside me, bumping into what looked like two university students pouring over a couple of paperbacks.

I apologised about a million times because I’m Canadian and that’s what we do best. I turned around and realised that I had to take my backpack off because I almost knocked over another precarious pile of books as I was negotiating the tiny entrance space.

I managed to squeeze through an even tinier entrance and was spit out into the main browsing area. It’s hard to describe in words or pictures what I saw. The only thing to say is that there are books occupying every square inch of this place. 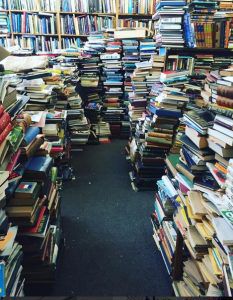 I can imagine that at one point there was some kind of system, but after 40 years of collecting books, the system has crumbled. Things fall apart, as Yeats said, and the things have definitely fallen apart system wise at Voltaire and Rousseau.

Actually trying to get a book will test your Jenga skills. Want what looks like a first edition of Slaughterhouse Five? You might be crushed by a pile of hardbacks covering UK wildlife in the process.

I’ve read on various web sites that the owner, David, is one of the nicest people you’ll ever meet. On the day I visited there was a man sitting behind what I assumed was a counter fast asleep. I could only see him from the chest up as he was completely surrounded in stacks of books. He looked like he was swimming in them, peaceful and content, and that’s what it’s all about.

It’s a pretty surreal experience in Voltaire and Rousseau. If you ever find yourself in Glasgow (and you should because it’s an awesome city), make this place your first stop.