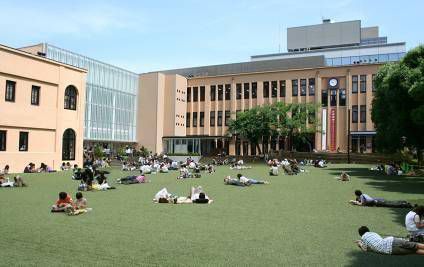 This is a guest post by Ellen F. Brown. Ellen is a writer and book collector from Richmond, VA. She’s so enamored of the printed word that she named her first child Read and considers it her greatest joy in life that her two sons almost always have books in their hands.

While planning a recent trip to Japan, I envisioned the best part would be visiting sacred shrines and temples, strolling among the cherry-blossoms, and eating ridiculous amounts of sushi. We did enjoy all of those things, but the real highlight for book-lovers like my children and me was stumbling onto the Kyoto International Manga Museum.

Opened in 2006, the Museum is a joint venture of the city of Kyoto and the Faculty of Manga at Kyoto Seika University. That there is such a thing as a “Faculty of Manga” gives you a hint that the Japanese take the form very seriously. The Museum is proof-positive.

The facility was designed as a comprehensive center for the study of manga culture.  Housed in a gorgeous nineteenth-century elementary school, it holds over 300,000 items dating back to the 1860s, including books, comics, magazines, and animation-related materials from all over the world.

The main gallery offers a permanent exhibit called “What is Manga?” that explains the history of the form, its cultural significance, and the process of its creation and distribution. The shelves along the outside walls are divided by decade going back to the 1940s. Making a circuit of the room presents a fascinating timeline of how manga has developed since World War II.

In the center of the gallery are stations dedicated to subjects such as “Is Manga Merely a Child’s Thing?”—the answer is definitely no—and the structure of the manga industry. My favorite kiosk went into the nitty-gritty details of the form and explained the conventions for things like panel layout and how to demonstrate character movement and the expression of emotion.

The most impressive part of the museum is how much of it is hands-on. A key feature is the Wall of Manga, which contains 50,000 books that visitors are invited to browse at their leisure. They can handle whatever titles catch their interest, no white gloves required. And there are plenty of cozy places to read, including a lawn on the museum grounds, a rare amenity in urban Kyoto.

Most of the books on the Wall—which actually fill several walls on two floors—were donated by the owner of a manga rental library. When he retired in 2005, he donated his inventory to the museum so people could continue to enjoy the materials he had acquired with the input of his customers. The Wall offers a unique historical record of what manga lovers were reading during the twenty years the business operated.

For visitors who don’t speak Japanese, the Museum’s “Manga Expo” corner houses an extensive collection of books from around the world. Browsing is encouraged here, too.

There are also manga-drawing stations and workshops where aspiring artists can learn the ins and outs of the genre and a Children’s Library containing 3,000 picture books and comics for parents to read to their children. For serious students of the manga form, there is a reference room on the third floor where researchers can access closed-shelf materials.

If you tire of looking at all the glorious books, the museum’s programming offers a nice change of pace. We were lucky to experience a performance of the traditional Japanese storytelling form of kamishibai (loosely translated it means “paper drama”), in which the performer presents his narrative with the aid of illustrated story-boards. Though the show was entirely in Japanese, I had no problem following along and found myself laughing aloud along with the equally clueless Israeli family sitting next to me. A calendar of upcoming events, which included a lecture on pocket-sized illustrated books from China known as lianhuanhua, had me wishing for a few extra days in Kyoto.

There is no question that the International Manga Museum has met its stated goal of creating a space that is “alive and keeps moving.” At the end of the day, I had to drag my two sons—ages 12 and 14—out the door. They would have happily spent the rest of our visit to Japan in that one museum. I was so enthralled by the place myself that I was tempted to let them.