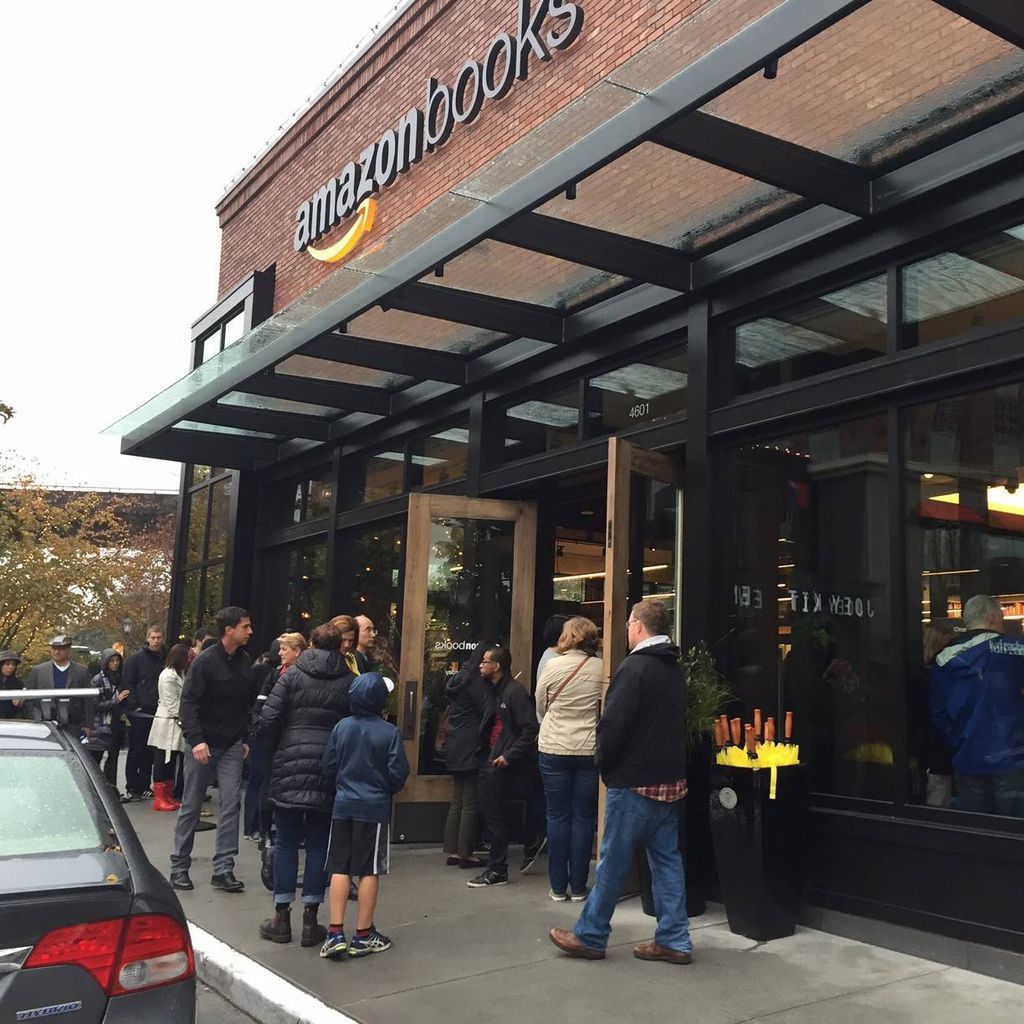 Amazon has spent a lot of years loudly and repeatedly telling all of us that 1) the bookstore is dead 2) print is dead 3) long live the ebook and the Kindle. This, of course, hasn’t proven true in any regard. Indie bookstores are doing okay, and print book sales are doing okay. People sneered as the declining sales of ebooks, but mostly it was just the market leveling out, that’s all. So fast forward a few years, and it isn’t a huge surprise when Amazon opened a physical bookstore in University Village, up in the northern Seattle area (Seattle being Amazon’s home base).

Living in the area myself, it made sense to trek up there and visit. “Trek” is the proper word, because it was some distance, a grind of traffic and weird directions. To fully understand how my trip up there went, please read The Odyssey by Homer. Including the bit where I had to spend a year with a woman because she had turned my crew into pigs.

The area around the Amazon bookstore, University Village, is a sort of posh outdoor mall. Lots of very fancy stores, gorgeous outdoor walking areas, all of it lovely. If one had to pick a location to launch their store, this was the prettiest possible place to do it, so Amazon nailed that. As I walked through the cobblestone walkway — beneath little christmas lights on trees — and approached the Amazon store, I had my first surprise.

Outside, there was a line. 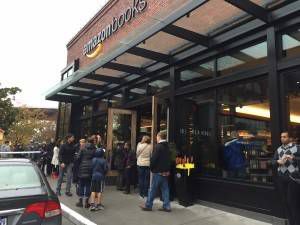 The last time I saw a line outside a bookstore was at midnight, waiting for new Harry Potter releases. I was thunderstruck. I joined the line and listened as the nice lady at the front would ask how many were in your party, and then your group would have to wait until an equal number of patrons had left before you could go in. Via evesdropping (my default method of learning things) I discovered this was because the fire marshall only allows 150 people inside the store, and they were capped out.

How to describe the store itself? The size of it was a little bigger than your average mall-based Borders store, back when those existed, but still smaller than a Barnes & Noble or anything. Perhaps the square footage of an apple store? It was bigger than I expected, but still very compact. Shelves close together, everywhere. Part of this was exacerbated by the crowds, of course, but I tried to ignore that when exploring the place. 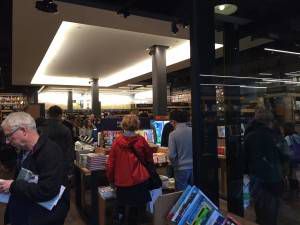 It was also less tech-looking than one might expect from a bookstore opened by an online company. The floor was a deep wood paneling, likewise the shelves. Along the wall by the ceiling were two long shelves filled entirely with books, spines even, a wrap-around display made of books. (I asked at the register. Some of them were for sale on store shelves. Others, if I really wanted, they would get down for me. “We have a really tall person here,” he said.)

Also to be expected, Amazon had their gadgets on display at the entrance of the store. A big TV running Kindle Fire TV, a row of Kindles, a few other things at small counters (I couldn’t get close to them. I cannot convey the crowd). Really, though, they were a fairly subtle presence. They were there, but not as obnoxious as they could’ve been. The books were clearly the focus of the store, as it should’ve been. 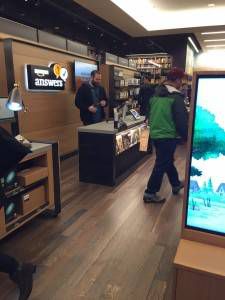 On all of the shelves, the books were facing outward. Really, there were no spine-out shelves anywhere in the store. This is a remarkably striking way to organize your bookstore. Cover art, always striking, has a chance to just grab you as you walk by. There are two things which stood out to me, however. One, despite the bigger-than-expected square footage of the building, the actual on-floor inventory is much smaller than it seems. It’s the “New releases” section of Barnes & Noble, spread out across a whole store. And indeed, that’s what it is. The whole store is new releases and notable books, but that’s about it. I commented, while walking around, that the store seemed like “an IKEA for books,” which is not an insult if one is aware of my rampant enthusiasm for IKEA. Still, what I precisely mean by that is that the store felt like a showroom for books, rather than an in-depth place to acquire new reads. I really offer no judgement about this, though. It’s probably a smart way to run a small bookstore, especially when you’re Amazon and you have the entire website to offer back-catalog to everyone. Fair enough. 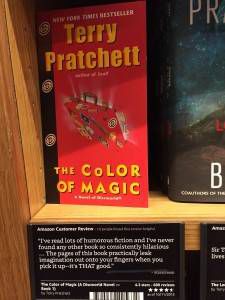 Beneath each book is a little tag hanging off the shelf. People have talked about the contents of these tags, so it was interesting to see them for myself. On each tag is a review of that book from a user on Goodreads. Additionally, there is the book’s Amazon star rating. And then there’s the barcode. The barcode is because no book in the whole store has its price listed anywhere. That’s because, I was told, their books are all priced at their price on Amazon, and since that price can fluctuate, you need to check the website for price. You do this with your Amazon app. Open the scanner feature, which can scan the barcode OR the cover, and it’s page will pop up. I did this constantly with books I was interested in, or just walking by. On the whole, it worked well. Occasionally, it would just stubbornly decide not to scan anything at all, because gadgets have a sense of humor no matter what we say. Also on the shelves, now and then, are Kindles attached to them, so you can just browse.

On the topic of the star ratings and reviews, I have two thoughts. One, I really liked the user reviews themselves. They rarely sounded like the sort of focused blurbs that you get from mainstream reviews, and that made them interesting and illuminating in a different way. The other books they compared a book to weren’t always what I’d thought of, but it would work to enhance the recommendation.

Two, about the stars: Nearly every book in the store is at least four or five stars, or some variation of the two. That seems fine on the face of things, but when that’s true of every book, it’s useless as a selection feature. As the saying goes, when everyone is special, no one is. It’s a dumb saying, but it illustrates the problem of a whole bookstore of five star books.

The kids section is lovely, and a junior version of the rest of the store. It has some Kindle tablets in big rubber cases for kids to play on, and lots and lots of books. Here, the cover-out setup works really well, in that kids can just see a book and grab it when it catches their eye. That’s perfect.

In addition to looking at books, I also eavesdropped on the staff a bit, curious about what they had to say. I’ll be honest: I wanted to know if they were Amazon salesmen, or bookstore employees. (I really wanted to know what their previous employments were, but I didn’t think that was polite to ask.) What was interesting was, I didn’t hear a completely unanimous opinion from my eavesdropping as I think I would if they were all touting a company line. They had varying opinions on ebooks, print books, and lots of other stuff. Individual opinions. That was excellent.

Checkout was surprisingly easy, like stepping down onto a step that isn’t there. He scanned my books, I swiped my card, my name registered as pre-existing on Amazon, the sale was done and turned up in my online purchase history. It was more or less an instant purchase, and a few more of those would spoil me utterly.

So, that’s the store. Now let’s wander farther afield for a few minutes. What does this all mean?

The first question I’ve gotten from people when talking about the store is “would I shop there again?” In reality, no, because I live ages away from the place. But in theory…probably. Not a lot, but I could see using the store about the level as I presently use the website. A small amount, now and then.

One, things never really die out, no matter how obsolete they seem to become, because obsolete is actually a myth. We live in an age with Spotify and vinyl. The most detailed CGI animation and drawn-on-paper animation. Or hell, claymation. Fallout 4 and Minecraft. Nothing goes away, it just ebbs and flows and evolves.

Second, Amazon isn’t doing anything new here, it’s just in physical form rather than on the website. The website has yet to kill physical bookstores, the existence of a physical store won’t either. Indie bookstores have seen a resurgence in recent years, and I think that’ll continue apace.

If Amazon spreads their bookstores and positions them wisely (in malls, probably), then what they might kill is Barnes & Noble, which is lumbering and finding it impossible to turn and adapt, like a dinosaur nearing a tar pit. If they are taken down, it’ll be by a dinosaur — sorry, a company — smaller and more agile. Amazon is neither of those things, but it can replicate the effect with these stores.

Third, the fact is, I have no idea how long this Amazon Books experiment will last. I’ll be curious if it does last past this one store. The reasoning is, Amazon has spent the past decade or so taking the idea that physical books, bookstores, and going places to buy things are all obsolete, and ramming that up our collective noses. And it’s worked. That’s what got people so worried in the first place. Suddenly, people could go “meh,” and just order a book online. This does not go without consequences, and that consequence might be that people visit the Amazon bookstore once (or just read about it) (in this article) (hi!) and then shrug and carry on buying books wherever they were. So it’ll be very interesting to see if this Amazon physical store thing will be a flash in the pan or not. I am ambivalent to either outcome, but I am very curious.

Oh, I almost forgot. After I left the Amazon store, I pet a small but cute dog who was damp from the rain, but was perpetually cheerful. I don’t think he’ll be there every time, okay? I think he was visiting like me. I just don’t want you disappointed. Bring your own dog?