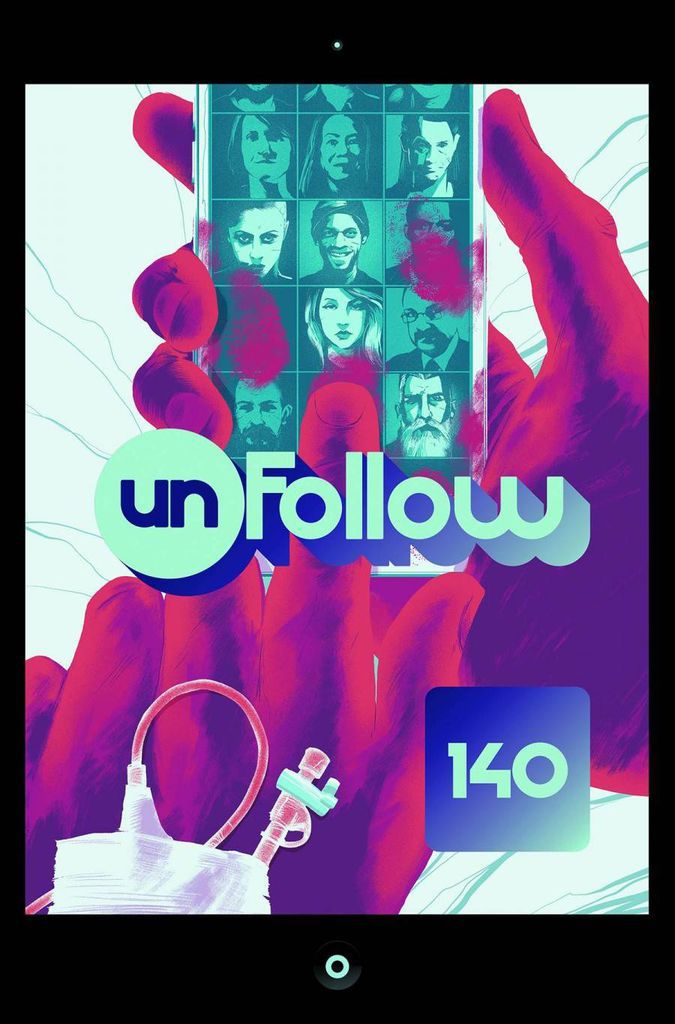 In which Dave and Brian talk about the second round of new Vertigo titles.

Brian says: Unfollow was one of the the books I was most looking forward to from the original solicitations. When a social media mogul dies, he decides to gift out his sizeable fortune to 140 of his followers. It’s a great set up for a series and it’s always interesting to see how new media can be incorporated into fiction. This first issue wasn’t exactly what I was expecting, starting off with a masked assassin pursuing a disgruntled employee across the mogul’s island and then smashcutting to one of the 140’s story before bringing us into the overall plot. I really enjoyed this issue, it had a nice sense of its own concept without feeling like all setup; there’s breathing room. It’s decompressed without feeling like it’s dragging. The pencils are very strong but I really liked Quinton Winter’s colors throughout the issue, including glowing digital numbers, crisp beach tones and great use of lighting in dark spaces.

Dave says: For me, Unfollow was one of those series that didn’t really register based on the concept. Maybe because any high concept piece revolving around social media is something that can go horribly awry. In fact, for me the only thing this book had going for it was the name Rob Williams, which is a name that I recently had associated with “A Writer to Watch.” But you know what? This overcame my biases, revealing a very good execution on a premise I might have otherwise written off. In concept and structure, Unfollow seems loosely akin to Vertigo’s 100 Bullets. A large overarching mythology that allows for smaller, more personal stories. What Williams does well in this first issue is to keep the premise stuff to a Willy Wonka mystery with a healthy dose of biting satire, while giving us satisfying glimpses into a global cast. And it doesn’t hurt that I also really liked Mike Dowling’s art — his linework is somewhat reminiscent of Barry Windsor Smith and feels right at home with this concept

Brian says: Going in, I wasn’t super certain what to expect but I walked away enjoying this issue. While “firefighter has pyromania” is a little bit of a tired trope, Si Spencer’s take on it felt fresh. This issue follows two women firefighters in North Daktoa as they put out a fire in a storage unit and the fallout from the discovery of criminal activity. What makes the issue is that it’s a character piece that focuses on Rosheen, a young woman who was orphaned as a child. Her obsession with fire seemingly spawned from the tragic death of her father. Rosheen feels like a full character after just twenty pages and I’m primed to see where she goes next. However, there is an underlying sense of something deeper in the shape of the “Matchstick Man.” This one was a bit of surprise and I’m in for at least the arc.

Dave says: Yeah, the backstory on this book was the key for me. I kept thinking “Oh, like Dexter meets Backdraft” through most of the book, which is probably more due to my lack of relevant references than anything else. I could easily see this as a cable drama, which makes me think — admittedly, perhaps unfairly– why am I reading this as a comic? Max Dunbar’s art was decent, but made me feel like it’s something I’d see on a more traditional super-hero comic. The mystery of Rosheen and her childhood did intrigue me, though. I’m on the fence right now. One more issue may be the deciding factor.

Brian says: An occult mystery in Glasgow, Scotland is the centerpiece for Red Thorn. Isla is on the search for her sister, who went missing nearly 20 years ago. Only, Isla harbors a secret power, anything she draws can come to life. While the conceit of the book is quite good, I didn’t really connect to it. At times it felt like it was holding its cards too close to its chest – Isla doesn’t reveal her ability right away and it undercuts the telling of her sister’s story. At other times, the book seems to rocket along the rails leading us through a tepid meet cute. Meghan Hetrick’s cartooning is very strong and the art really gets to shine from depticing Glasgow to sea shell monsters and ultimately Thorn himself. A few things in the issue do happen without much explanation that don’t quite land as mysteries, just a thing that happened. Oh, a magical lump of swamp just came to give you the secret you need just now? Sure, thanks. Don’t let the door hit you on the way out.  It’s perhaps the weakest of the new Vertigo books for me and I was really looking for a strong occult-oriented book.

Dave says: We’re on the same page. I really wanted to like Red Thorn, but I also felt is was probably the weakest of the new launches thus far. On paper it sounded great to me: an occult mystery in Scotland by a Scottish writer… sounds like primo grade-A Vertigo to me. And yet, I also failed to really connect with Baillie’s story. It may have been the execution of the first issue, as we have a LOT of movement that just sort of grazes over character without letting us really attach to any deeper emotional moments. Too much setup, hitting too quickly. That said, the character on the cover only appears on the final page, so there’s a chance here that once we get rolling this could be a good time. I like Meghan Hetrick’s art, expressive though perhaps slightly too cute for the darker elements of the book, BUT… that swamp creature reminded me of something that’d be right at home in Fiona Staples’ Saga cast, which is exactly the kind of fun this book can once the setup is out of the way.

Brian says: Jacked is one of the books that I wasn’t necessarily looking forward to. I’m not entirely certain why, but I didn’t feel any great attachment to it, perhaps even a bit put off by the Glenn Fabry cover. I hadn’t realized going in that Eric Kripke – creator of the CW’s Supernatural – was the author, so when I did finally put that name together, I felt a little better. I’m glad I did take the plunge though. While this sort of midlife crisis story arc is overplayed, I found myself taken in by strong, dirty pencils from John Higgins which carry an almost Darrick Robinson quality. The story flows through the perceived ills of Josh’s life: complacency, boredom, pornography, social impotency. He learns about life-enhancing pills from his overachieving dentist brother and orders some up online. Only, they have some unexpected side effects. Super strength, super speed and super highs. It’s not generally the type of book or concept I gravitate towards, but I really enjoyed this particular telling.

Dave says: I, on the other hand, did note Kripke’s name in the solicits. As a fan of (the first five seasons of) Supernatural, I also felt the show carried some comic book influences. And that made me curious. On the other hand, when you get TV and film folks coming into comics, they sometimes end up writing comics that feel like cinematic concepts that failed to sell. Thus, I was very happy to discover that Jacked is a comic book that seems to really want to BE a comic book. While the premise — normal guy gets powers — is something that we’ve seen a LOT, I maintain that it’s all about execution, and Kripke made me like Josh and his world. It sort of reminds me a bit of Harvey Pekar mashed up with Bruce Willis in Unbreakable. There’s an honesty to Josh’s portrayal of middle age that I realize I haven’t seen much of in recent comics. John Higgins, an old name in the Vertigo game, really helps round out Josh’s depiction and elevates this book even more. This doesn’t really feel like something that you’d find at Boom! or even Image. It feels specifically Vertigo, and I really like that.

Brian says: I felt like this month was a little more varied in concept than the first month and it only benefitted the line. There’s definitely line cohesion developing, getting a good feel for what a Vertigo book reads, looks and feels like today. In terms of last month, I found that Survivors’ Club and Twilight Children remained really strong and that Art Ops really coalesced in its second issue into a tighter book. Overall, things are looking really good for the new Vertigo.

Dave says: I think we’re definitely on the same page overall. As far as the second issues go, I’ll add that Clean Room also got more under my skin with its second issue. Simone’s serialized storytelling is doing its job, and getting me curiouser and curiouser as to what’s next. This month’s #1’s are 50/50 for me, with two books that I really dug, and two that are on the fence. Even so, it’s worth noting that as we head into the third month of these relaunches, I am currently buying more Vertigo titles than I’ve bought in at least a decade.