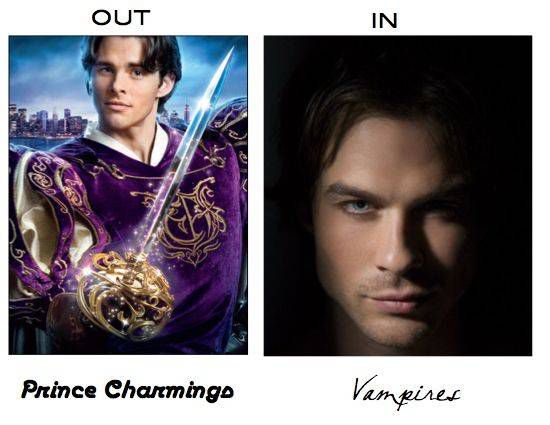 I know, I know… we’ve covered vampires. We’ve made fun of them, we’ve defended them, we’ve not given a crap about them, and everything in between. Have we thought about why they fill such a desired place in entertainment today, though? Here’s my theory: vampires are the new Prince Charmings. Let me explain…

Powerful: The Prince Charmings of fairy tales were always powerful because they were royal. Vampires are powerful because they have literal powers. Depending on which book you’re reading (or which show you’re watching), your vampire of choice will have something different to add — but will always possess a power. Whether it’s moving insanely fast, being overly strong, having hearing capabilities beyond the ordinary, reading minds, or what-have-you… these creatures are not to be messed with, and let’s face it – who doesn’t like to have that on their side (you know, as long as they don’t turn around and remove your Jugular)?

Handsome: Have you ever seen a vampire who wasn’t attractive (even in your mind’s eye)? Prince Charmings are always handsome, it’s their mojo, but vampires are hot. They’re usually young, vivacious (regardless of actually being dead), and seductive. And really… have you ever come across a fat vampire? Me thinks not.

Wealthy: As we’ve covered, the Prince Charming character equals royalty; and royalty equals rich. In every story in which we’ve met a version of him, we’ve never met a pauper Prince. However there is usually a catch (Daddy says he has to marry so-and-so to get his money, or he has to turn back into a human so you aren’t committing bestiality – sorry, that one’s always really bothered me). Points for the vampires: centuries of “living” tends to lend to independent monetary advantages. Perhaps it’s the lack of need for spending on groceries, cars, medical bills, heating (or much of anything at all actually) that allows them to save up, but regardless of why I’m betting you’ve not come across a modern vampire who wasn’t rolling in the dough.

Brave: With trusty sword and steed (and army if he needs), Prince Charming is always ready to defend his maiden’s honor (fighting a dragon to give her the much needed kiss or just walking over to her pad to return a lost shoe). Sometimes he even saves his lady when she doesn’t need saving (you’ve seen Enchanted, right?). All lovely and sweet. Not quite as sexy as a vampire who can use his bare hands (and teeth) to fight off any who may threaten you, though. Most modern women enjoy a  vamp who’ll let them go it on their own while they can – and then will step in and save them if they haven’t been able to save themselves (because it’s always nice to have a partner who will at least let you try, isn’t it?).

Also, there’s a very certain something that the vampire adds which all Prince Charmings lack…

The bad boy side: While being the one that you would want to bring home to Mummy for tea, Prince Charming lacks that specific something that many women find quite appealing: the inner bad-boy. Nothing says bad-boy like vampire. Though most women don’t want a complete a-hole… they do want someone who is tender, sweet, and loving, but CAN be tough and rough when need be. Enter Le Vampire; the ultimate in I-will-lie-by-your-side-and-keep-watch-while-you-sleep or I-will-save-you-every-time-an-original-tries-to-sacrifice-you, while also having to fight themselves to resist you (sexy when you know their good side always wins).

Maybe that’s just me… perhaps I have bad taste in fake men (I am planning a fake wedding instead of a real one), but I’ll take the Vampire over the Prince any day.