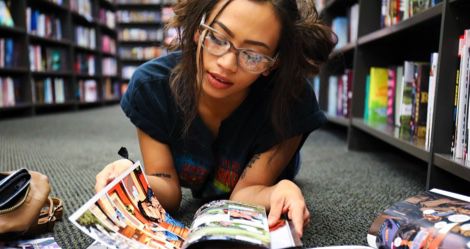 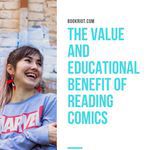 As a child, I was gifted a lovely comic book by a friend, a series called Sport Billy. In it, a sporty kid from the planet Olympus, who carries a Mary Poppins type bag, travels to Earth to ensure fair play in sporting events.

The hardcover book contained a few episodes of the series, and I read it over and over during my childhood. It was the only comic book I owned growing up. Then, for years and years, I didn’t read comics. I only picked them up again when I was about 20, with Calvin and Hobbes and Baby Blues.

As I grew up, there was this idea that “books with drawings” weren’t real literature, that if you didn’t read a full-length all-letters novel, you were being a lazy reader; at school, the encouragement was always to pick up the books with words and no images.

I’m no exception when it comes to sometimes dismissing certain writers, but I’m the first to agree that reading anything is better than reading nothing at all. And comic books can go so much deeper than certain novels. I’m glad that graphic novels seem to be gathering more and more fans, maybe people are finally understanding how complex these works can be.

As I grew up and became a teenager I started connecting comic books with superheroes, and superheroes seemed to me to be more directed to boys than they were to girls. Not that this fact would have stopped me from reading comics altogether; after all, I grew up in a very patriarchal culture, always feeling a certain type of disgust for anything girly, so I believed that doing something which was cool for boys made me extra cool, but comics where boys were always the superhero didn’t really speak to me. In addition to that, comics were very often used almost as a tool for undermining boys: because boys were the largest chunk of the population reading comics, they were seen as lazier readers than girls. I refused to be a lazy reader, so I skipped them.

Bit by bit, I’ve been discovering comics again, mostly graphic novels, and the flame was rekindled through some adaptations from my favourite books: The Handmaid’s Tale, The Diary Of Anne Frank, The Graveyard Book. Even if the story is redacted to tangle itself up in the peculiarities of the graphics, it wins in artistry. How beautiful these volumes are!

I wonder how many people have become engulfed in these stories because of the graphic novels, when they would be put off by them if there was only the narrative and no drawing appeal.

In the city where I live there is a pretty cute comic bookshop called Yendor. They have loads of comics, many graphic novels, and lots of geeky stuff.

Although I am not yet a regular comic reader, it’s always nice to walk around the shop and see what they have new. Last week I stumbled upon a hardcover graphic novel called Irena.

Since I read The Diary of Anne Frank at 15, and especially after visiting her house in Amsterdam a few years ago, I’ve been drawn to all types of stories about the second world war. I’ve listened to a few more war diaries on audiobook, and even when the story is fictional, it seems to have a certain pull on me.

Irena was just there, amongst other graphic novels, but the cover art caught my attention. I started reading it, and realised I had never heard of Irena Sendler, so I pulled out my phone and did some research. After a bit of pondering, I decided to get the novel. The art alone, and the hardcover edition, would have been enough to make it look pretty in any bookshelf, but the story was one of hope, true, and with a happy ending to top it off, so I took it to the check-out and walked out of Yendor longing to get home and into the story.

Indeed, the novel was beautifully written, and you could feel how much love and care was put in by the authors in creating it. I was halfway through the novel when a dialogue made me stop reading, and I realised something I hadn’t thought about before.

Irena, as a young child, is at the top of a hill, sitting next to her father. This is one of Irena’s memories: Irena’s father died of typhus contracted from one of the many patients he tried to heal during his career as a doctor. In her memory, they are watching the sky and her father points out an eagle in flight. Then, he says:

“Look, Irena! It’s an eagle! The largest of all birds of prey!”

And it was then that it hit me.

One of the things I loved in fiction books as a child was the small pieces of knowledge the authors dropped here and there. I still remember learning that granite is made of quartz, feldspar, and mica. I learned this from an adventure book, because the protagonists had taken a break from their walk next to a big granite rock. The authors didn’t have to put that information in there, but they did. I remember repeating the words, feeling special that I now knew that. But while I remember finding loads of tiny nuggets of knowledge through my childhood books, this stopped as soon as I started reading adult literature.

Now, I understand why that is: adult fiction writers assume that we are clever, that we KNOW. But, the truth is, sometimes we don’t know, and even if we did at some point, we might have forgotten. To be fair, I had forgotten that the eagle was the biggest bird of prey and it was nice to have a reminder on that. So, I wish more writers would add things like this, simple things, small things, in ways that don’t sound patronising, just worked out into the conversation between characters, anywhere in the text that would remind us that, even as grownups, there is still room to learn things which are seen as basic everyone-already-knows-this things.

Oh, and before you say there’s nonfiction for that: I don’t want to have to rely on nonfiction, not everyone enjoys reading nonfiction. I want regular fiction books, teaching us things that nonfiction books might. And because we are not children, I want them to insert even more than small pieces of knowledge. I want general culture, and tiny obscure things put in there for the sake of letting us know.

I miss stumbling upon information like this in adult fiction books, running my tongue through the words, to recite them as if it’s a new catchy song on the radio and go…quartz, feldspar, and mica.

8 Stories Of Unsung Heroes Of The WWII

5 Unforgettable Books About Heroism During The Holocaust