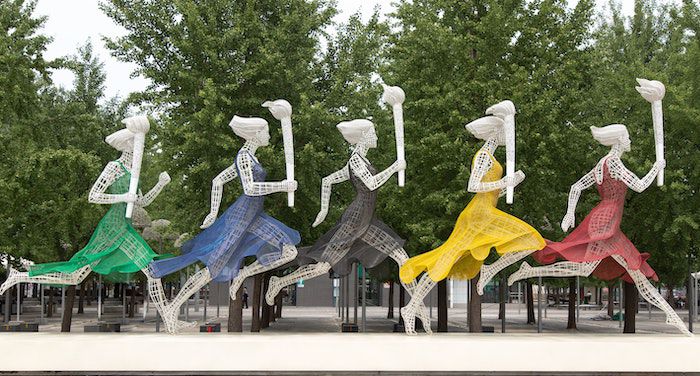 The world is currently grappling with the effects of COVID-19 and to say that it hasn’t been easy would be an understatement.

As a result of the virus, so many lives have changed and early 2020 has seen numerous changes, including the cancellation of major events – rightfully so. While cancelling or postponing these events may be challenging for organizers and attendees, it’s important to practice the safety measures that health officials recommend. Safety and health are the first priority.

One of the major events that is postponed to 2021 is the Summer Olympics, which are scheduled to be held in Tokyo, Japan. The best athletes in the world compete for national and individual honor; some train their whole lives just for this moment that usually takes place every four years.

For now, you can read about five U.S. Olympic athletes that have succeeded on the world stage at past Olympic Summer Games. They have won different medals – bronze, silver, and gold – but here the focus is on the latter.

Courage to Soar: A Body in Motion, a Life in Balance by Simone Biles with Michelle Burford 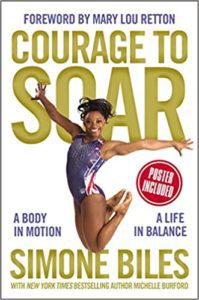 Simone Biles is a superstar American gymnast who has set several records in her sport.

She became the first female U.S. gymnast to win four gold medals at a single Games at the Rio de Janeiro, and she was the first gymnast to win three consecutive world all-round titles between 2013 and 2015, per Encyclopedia Britannica.

She has four Olympic gold medals already. It is still possible that Biles will be competing in Toky0 2021; however, she said in a recent interview that “nothing is set in stone.”

Her book includes a foreward by Mary Lou Retton, also an iconic U.S. gymnast, and covers Biles’s childhood through her rise to the 2016 Olympics, facing some challenges along the way.

Breaking the Surface by Greg Louganis with Eric Marcus 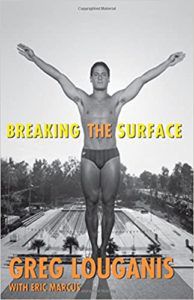 A four time Olympic gold winner, Greg Louganis was a terrific diver. He continues to be regarded as one of best in his sport. Louganis won several World Championships and won gold in two Summer Games – one in 1984 and the other in 1988.

It was at the 1988 games in Seoul that he captured everyone’s attention (even more than usual). He suffered a head injury while diving that left blood in the pool, but that’s not where this story ends. Not only did he compete further in his event, he won gold.

The book is a window into Louganis’s life as an Olympic athlete and what was going on behind the scenes throughout the years.

Currently an HIV/AIDS activist, he is a symbol of hope as an HIV-positive gay man and former Olympian.

A Kind of Grace: The Autobiography of the World’s Greatest Female Athlete by Jackie Joyner-Kersee with Sonja Steptoe 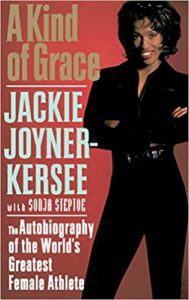 Jackie Joyner-Kersee is in the history books as track-and-field athlete. Her achievements in the heptathlon are among her greatest feats.

What is a heptathlon? It’s a series of seven track-and-field event that happens over two days. The scores of all of the events are added up to decide the winner.

The book covers her journey towards athletic stardom, and the title is no joke, she was that good. 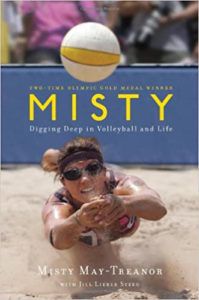 They were a very dominant duo and also won several World Championships consecutively.

In her book, May-Treanor discusses her upbringing, her beach volleyball journey all the way to the Olympics, the serious injuries that she had to deal with, and more.

Beneath the Surface: My Story by Michael Phelps with Brian Cazenueve 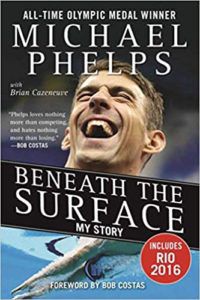 During his time as a competitive swimmer, Michael Phelps won 23 Olympic gold medals. With a total medal count of 28, he is the most decorated Olympian of all time and participated in five Olympic Summer Games.

He was a long-time presence in the world of swimming and the next Olympics will be the first where he doesn’t compete in about 20 years. Along with most of the other athletes whose autobiographies are featured here, he has retired.

Covered in the book are his path to become such a successful Olympian, some of the early challenges that he faced, and insight into his training.