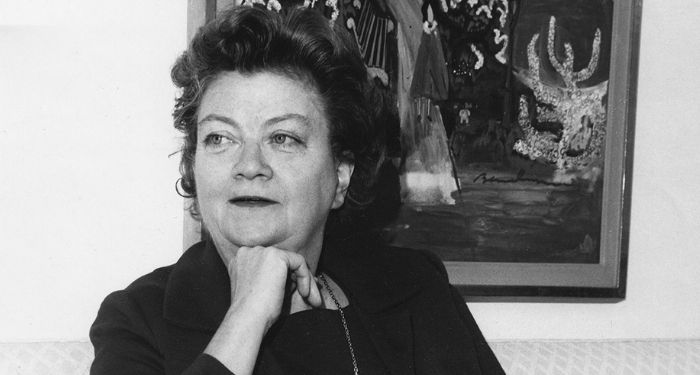 In 2017, during my last year of college, I had the privilege of presenting a thesis at an annual literature conference for my program. My essay was about rebellious children’s books, mostly from the 20th century, and how titles like Harriet the Spy, Matilda, and Charlie and the Chocolate Factory allowed children the opportunities to rebel against oppressive adult authority figures, thereby signifying to the reader that there was always the chance for things to one day get better. But nowhere in my extensive research did I ever come across the name of the queer woman who helped bring some of these books to life.

“Oh hell, it just boils down to: you just can’t explain this sort of basic wonderful stuff to some adults,” once wrote children’s book editor Ursula Nordstrom, best known as the editor-in-chief of Harper & Row’s Books for Boys and Girls from 1940 to 1973. Credited with ushering in an era of children’s books that catered to the child’s emotions and imagination rather than appealing to the norms and values of their parents, Nordstrom’s vision helped publish the likes of Goodnight Moon, Where the Wild Things Are, Stuart Little, Harold and the Purple Crayon, The Giving Tree, and Charlotte’s Web. But over a half a century later her legacy, much like many women of her time, has been partly lost to history.

Born in 1910 to vaudeville comedians in Manhattan, Nordstrom took business courses as a young adult and began working as a clerk in the textbook department at Harper & Row in 1931. Described by many as a “painfully shy young woman,” she was promoted to Louise Raymond’s assistant in the Books for Boys and Girls department around 1936. When Raymond announced her retirement in 1940, Nordstrom was the first name on the list to be named her replacement as editor-in-chief of the children’s books sector.

By 1960, she was Harper’s first female vice president.

Having always disliked the glorified, sentimental tone that she believed had come to plague American children’s literature, Nordstrom immediately began seeking out authors who were going to challenge the status quo. (When asked years later by her nemesis Anne Carroll Moore, superintendent of children’s work at the New York Public Library, why she felt qualified to be an editor of children’s books, Nordstrom replied, “Well, I am a former child, and I haven’t forgotten a thing.”) Her motto was that children were “brand new people,” and that there were far too many “bad books for good children” in the publishing world. Thus, she sought to establish a genre of “good books for bad children.”

According to the HarperCollins publishers of today, “Nordstrom took the world of children’s literature into an exciting new era. Under her supervision, for the first time, children’s books dealt with issues such as divorce, puberty, loneliness, alcoholism, race relations, unwanted pregnancy, and homosexuality — and handled these issues with skill and sensitivity.”

“Nordstrom was more than an editor to her authors and artists — she was often their therapist, confidante and friend, and always their creative guardian and greatest champion,” wrote Maria Popova from The Marginalian. “Above all, Nordstrom was a fearless custodian of the child’s world and imaginative experience, to which unimaginative grownups so often lay perilous claim, and of the artist’s creative integrity in the face of growing commercial pressures toward marketable conformity and safe, commodified, politely pedestrian storytelling.”

As a result, the editor’s influence at the height of her success was unmatched. “Ursula’s list begins to resemble nothing so much as a Who’s Who in children’s literature after a while,” said Betsy Bird, once the New York Public Library’s Youth Materials Collections Specialist. “She had this crazy sense of humor that went well with her ability to spot potential children’s literature talent.”

But much of what remains unsaid of Nordstrom’s legacy and success was that she had an advantage over other editors and creatives of her generation, which was that she was a lesbian. “Modern childhood’s most benevolent patron saint turned out to be a childless gay woman living through the height of consumerism in America and yet managing to envision, publish, and defend children’s books that were not forgettable commodities but masterpieces that stood the test of time and enchanted generations,” says Popova. As a result, many of the authors and voices she nurtured and published were also queer, however loud or quiet.

Margaret Wise Brown, author of Goodnight Moon and The Runaway Bunny, since became a celebrated bisexual for her decade-long affair with Blanche Oelrichs, ex-wife of actor John Barrymore. Harriet the Spy’s creator, Louise Fitzhugh, was also a lesbian, which helped bring the queerness of her novel to the forefront and allowed legions of young readers to see themselves reflected in the character. (According to Neva Grant from NPR, “Although Harriet’s sexuality is never touched on in the book, her boy’s clothes and bravado sent a message to some kids who felt different and didn’t know why.”) But one of Nordstrom’s most daring and unfortunately lesser known queer efforts was the publication of I’ll Get There. It Better Be Worth the Trip by John Donovan in 1969.

The first young adult novel to ever discuss same-sex attraction, it was named by Megan McCluskey as one of Time magazine’s Best YA Books of All-Time. “Lauded as one of the first teen novels to openly explore queerness, I’ll Get There. It Better Be Worth the Trip, published in 1969, broke early barriers in the now-thriving queer-YA movement, [which] paved the way for influential and beloved LGBTQ books like Alex Sanchez’s Rainbow Boys and Benjamin Alire Sáenz’s Aristotle and Dante Discover the Secrets of the Universe,” she wrote.

“I had for years also said that I wished somebody would write a book that would just give a hint that there could be a romantic feeling between two persons of the same sex,” Nordstrom once justified. “It happens to almost everybody when they’re growing up, a crush on a teacher or something, and they outgrow it or they don’t outgrow it. Unbeknownst to me, John Donovan wrote me a letter and said he was writing a book about the different varieties of love.”

But no amount of queer kinship would compare to Nordstrom’s mentorship of Maurice Sendak, who was gay, closeted, and unsatisfied with life.

“[I have] the sense of having lived one’s life so narrowly — with eyes and senses turned inward. An actual sense of the breadth of life does not exist in me. I am narrowly concerned with me… All I will ever express will be the little I have gleaned of life for my own purposes,” he wrote to her early in his career, before she would help him publish Where the Wild Things Are.

Sendak first met Nordstrom in 1950 when he was embracing his inner Rhoda Morgenstern and working as a window decorator for F.A.O. Schwartz in New York City. Handpicked by the store’s children’s book buyer to meet with Nordstrom, she became infatuated with his sketchbooks and knew they needed to work together. “Preachy parables and books of manners and good deeds didn’t interest her,” wrote Bailey Johnson from Bluum. “She believed that children should read literature that prepared them for the complex and confusing world they were in — and she saw this veracity in Sendak’s work. His naughty and adventurous characters and their fraught emotional journeys were exactly what she was looking for.” In response to the vulnerable insecurities he expressed to her in writing, Nordstrom responded with, “You may not be Tolstoy, but Tolstoy wasn’t Sendak, either. You have a vast and beautiful genius,” adding in a postscript, “Love, fear, acceptance, rejection, re-assurance, and growth. No more for now.”

“I loved her on first meeting,” Sendak said years later. “My happiest memories, in fact, are of my earliest career, when Ursula was my confidante and best friend. She really became my home and the person I trusted most. These beginning years revolved around my trips to the old Harper offices on Thirty-third Street and being fed books by Ursula, as well as encouraged with every drawing I did. We had our disagreements, but she treated me like a hot-house flower, watered me for ten years, and hand-picked the works that were to become my permanent backlist and bread-and-butter support.”

After two decades of publishing books by other people, Nordstrom wanted to try her hand at writing a children’s book of her own. “[She] didn’t believe in simple answers and pat solutions. She wanted to be charmed, carried away, spoken truth to, in books — even if she was, as she put it, just a ‘deadly dull adult,’” explained Kelly Blewett from the Los Angeles Review of Books. Therefore, although she had by that time amassed an ambitious catalogue of “good books for bad children,” Nordstrom still wanted to display her own creative writing talent on the pages of a book that belonged solely to her. The Secret Language, Nordstrom’s only novel as an author, hit shelves in 1960 and was described by the editor as “an unpretentious, simple, rather detailed account” of a young girl’s emotions and experiences while away from home at boarding school.

Nordstrom was infamously modest about the book’s success, even though it was very warmly received, since The Secret Language is surely one of the most queerest children’s books ever written. Of course, sexuality is never explicitly discussed, but the secret language to which the title refers speaks to the language protagonist Martha develops with her new friend Victoria called leebossa. “Now, leebossa is for when you like something. When something is just lovely or when something works out just right, it is leebossa. For anything especially nice, you can say leeleeleeleebossa. But that’s only for something really wonderful. Understand?” Martha explains. Children would obviously be oblivious to it, especially in 1960, but I feel confident in assuring anyone that leebossa is clearly a code word for lesbian.

According to children’s literature historian Leonard Marcus, the editor allegedly wrote a sequel titled The Secret Choice that she finished all the way until the final chapter before claiming she didn’t know how to end it. Openly teasing the sequel in interviews, Nordstrom reportedly burned the manuscript near the end of her career with Harper, although this claim has been disputed. Whatever the case, the struggles she faced writing a second children’s novel undoubtedly represented in some capacity the struggles she faced with her own queerness during a century that denied the existence of queer people.

Once a painfully shy person, Nordstrom kept her private life distinctly private and away from her professional career, although she was in fact a lesbian. Her partner, Mary Griffith, was referred to as her “longtime companion” in Nordstrom’s 1988 obituary, ensuring that ambiguity remained in her personal life even in death. As a result of her fierce attempts to keep her private life separate from her professional life, little else is known on this front. After stepping down from Harper in 1973, she continued with her own imprint as a senior editor, Ursula Nordstrom Books, until 1979.

Although she succumbed to ovarian cancer nine years later at the age of 78, Nordstrom’s legacy, and especially her queer legacy, proudly lives on for those willing to seek it out — just as she did with new talent in children’s literature. As one colleague recalled, “Anyone who called, anyone who got off the elevator, anyone who wrote in, could be seen and heard.” She always answered her own phone and if she happened to hear another ringing, she’d yell, “Answer that! That might be the next Mark Twain.”